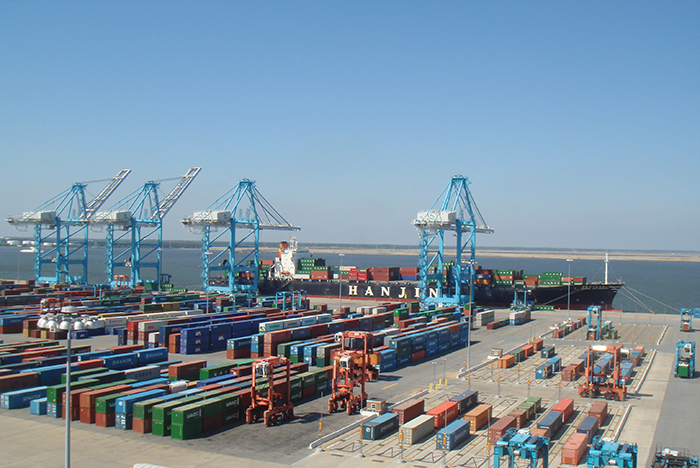 The Port of Virginia (above) has additional space to provide cargo owners looking for storage during the coronavirus pandemic, but some cargo owners are cautious about using terminals and containers as mobile warehouses. Photo: Port of VIrginia.

Correction: A previous version of this story incorrectly identified the pictured port as the Port of New York and New Jersey. JOC apologies for the error. .

Agricultural and food shippers are urging the Trump administration to engage with the Federal Maritime Commission (FMC) to address detention and demurrage penalties linked to disruptions caused by the coronavirus disease (COVID-19) pandemic, fees the shippers consider unfair.

In an April 3 letter to the National Economic Council (NEC) and US Department of Agriculture (USDA), a group of 80 signatories said it’s time for the FMC to settle the three-year debate about detention and demurrage practices without further delay.

The FMC sought public comment on a proposed rule, but has taken no further action since last October. Commissioner Rebecca Dye has said the agency isn’t seeking to determine “fault,” but rather the interpretative rule would provide guidance on how the agency will consider whether fees are reasonable when adjudicating a formal complaint.

“We believe six months has been more than sufficient for the Commission to read 104 comments, the overwhelming majority of which support the rule,” the group wrote in the letter to NEC director Larry Kudlow and USDA secretary Sonny Perdue.

The call to resolve the detention and demurrage battle comes as the FMC on Monday formed supply chain innovation teams to discuss how to settle issues related to coronavirus bottlenecks. Ocean carriers, which are also working with the FMC, counter that if beneficial cargo owners (BCOs) do not retrieve, unload, and return containers, a supply chain bottleneck will harm everyone until the coronavirus pandemic passes.

The ag and food shippers objected to “the ongoing unconscionable imposition of millions of dollars of unfair detention and demurrage penalties on US agriculture by ocean carriers and marine terminal operators during the coronavirus crisis,” which they believe is why the FMC must act immediately.

Ocean carriers and terminal operators object to the characterization of detention and demurrage fees as unreasonable, as well as the idea that they are using the fees as a revenue generator during a time of crisis. They don’t believe the federal government should intervene into contractual issues between carriers and BCOs.

The World Shipping Council (WSC), which represents approximately 90 percent of the global liner ship capacity, said the first draft of interpretive rulemaking was too broad and exceeds the powers afforded to the commissioners via the Shipping Act of 1984.

How coronavirus has shaped the conversation

Resolution to the detention and demurrage conversation has taken on new urgency as coronavirus closures have rapidly broken down the traditional international supply chain in waves. In February and into early March, with Chinese factories shut down and sailings being blanked, detention was a critical issue for BCOs and truckers unable to find a place to return empty containers, although terminal operators countered that truckers often cause the very issue they complain about by canceling or missing appointments with little notice.

“About six or seven weeks ago, it was pretty bad. We personally had over 1,000 containers sitting either in our yard or at trusted facilities that we weren't being able to pick up because of the closures that the marine terminals implemented,” Robert Loya, vice president of drayage provider CMI West, said during the JOC webcast “TPM20: What We Missed — The Trucking and Intermodal Outlook,” on April 2. “Despite the fact that marine terminals are opening more gates, we're still having trouble making appointments to return equipment.”

The primary concern, though, has shifted to how BCOs will handle laden containers if their distribution centers are shut down, or they are suppliers to companies that are closed. BCOs have used detention in transit (DIT) requests to keep containers in international markets where storage costs are lower, while port authorities and ocean carriers have provided storage options in the US.

Rachael Acker, logistics director for Wolverine Worldwide, warned BCOs not to leave containers in terminals because ports are not mobile warehouses.

“Work directly with your forwarder or ocean liner to come up with solutions that are beneficial for both sides,” she said on the JOC webcast. “As shippers, we really should be partnering to find the best solutions for our businesses, carriers, and terminals to keep cargo flow fluid.”

The Ocean Carrier Equipment Management Association (OCEMA) emphasized emptying and returning containers, if at all possible. Otherwise, bottlenecks are likely.

“Containers sitting at the ports and rail ramps would quickly tie up space which would impact the unloading of trains and discharging of vessels. Containers stored on chassis at the rail ramps or at shippers’ facilities would create a chassis shortage which would then prevent other units from being picked up and result in the same negative impact to train and vessel operations,” OCEMA wrote in a March 30 statement.

How to accomplish this is a question before the FMC supply chain teams. The FMC has asked each member to discuss what all stakeholders can do to address existing bottlenecks and restore fluidity.

Mediterranean Shipping Co. unveiled a “Suspension of Transit” (SOT) program at six transit hubs in Asia, the Middle East, Europe, and the Americas. Maersk Line is similarly offering to slow down supply chains by extending transit times and storing cargo in transshipment hubs with a longer layover, or storing containers at yards and depots at origin or destination ports. And port authorities in Georgia, Virginia, and Washington state have also offered in-terminal or near-terminal storage options for BCOs.

“Shipping companies are offering solutions including extended transit times, storage in transit, and other innovative approaches, but at the end of the day everyone in the supply chain must remain focused on keeping cargo moving through the ports,” WSC wrote in a recent statement on coronavirus. “This issue cannot become ‘someone else’s problem.’ It is everyone’s problem, and the pain and the solutions must be shared.”

Canada Trade and Shipping Outlook
TPM22: What We Learned — Container Shipping in the Crosshairs
Managing E-Commerce From Order to Delivery and Beyond
END_OF_DOCUMENT_TOKEN_TO_BE_REPLACED