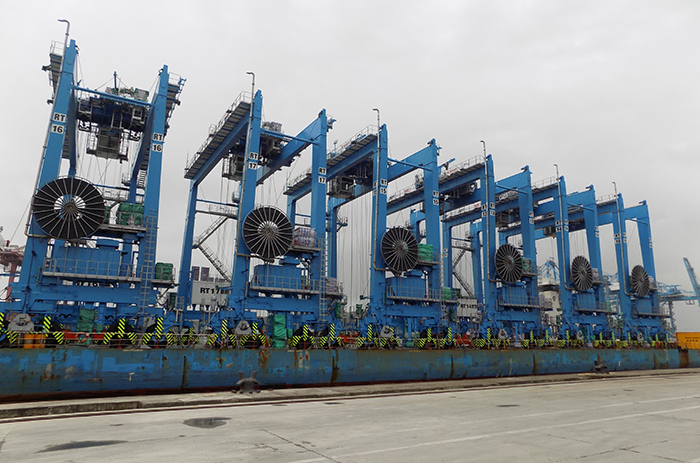 The new cranes are electric and will help reduce harmful emissions from the port.

The new cranes are all electric and capable of lifting a 50 tonne load under a twin-lift spreader, compared with 40 tonnes (44 tons) under single lift spreaders for cranes deployed at present, according to a port statement.

“Sany Group has delivered the e-RTGs on time and (the new cranes) will help JNPT continue with uninterrupted and efficient operations,” JNPT Chairman Anil Diggikar said.

Upon delivery of the remaining nine similar units, JNCT’s total RTG count will increase to 27, the announcement stated.

Officials also said the use of electrically powered cranes, instead of those currently operated with diesel fuel, will help minimize their maintenance costs and environmental impact through reduced emissions.

Though JNCT increased fiscal year 2016 to 2017 volume 7.3 percent year-over-year, statistics showed the state-owned terminal has lagged behind private rivals in the harbor in productivity. JNCT’s average April-to-June dwell time for import cargo by road was 30 hours, versus 23 hours at APM Terminals-operated Gateway Terminals India, and for railed import cargo, it was 72 hours and 54 hours, respectively, according to a JOC.com analysis of new data released by DMICDC Logistics Data Services.

Similarly, for export traffic by truck and rail, JNCT had the highest dwell time levels in the first quarter, the analysis showed.

Efficiency improvements are imperative for JNCT to remain competitive, as the opening of a new terminal by PSA Terminal toward the end of the year and ongoing capacity building at the nearby private giant Mundra Port will heat up the battle for market share in the west coast region.

Under its flagship Sagar Mala program, the government is spending heavily on dredging, highway access, and other connectivity projects at JNPT so India’s busiest gateway can remain competitive in the challenging operating environment of ever-growing ship sizes and accelerating consolidation in the global container shipping industry.

Further inaction on ‘chassis problem’ not an option

Canada Trade and Shipping Outlook
TPM22: What We Learned — Container Shipping in the Crosshairs
Managing E-Commerce From Order to Delivery and Beyond
END_OF_DOCUMENT_TOKEN_TO_BE_REPLACED