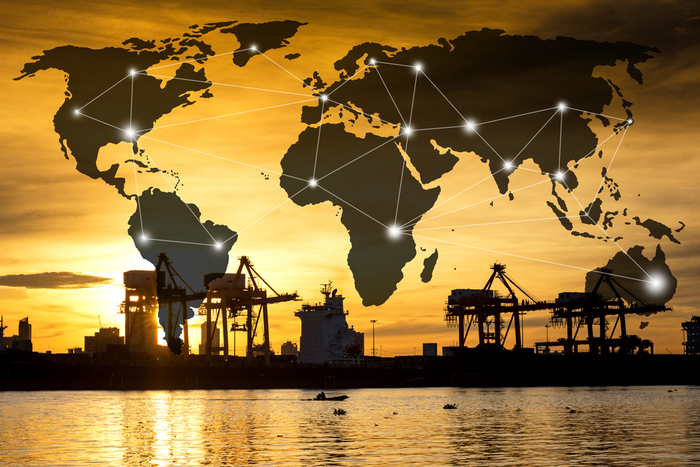 Ports around the world are embracing their role as digital data and service hubs at differing paces, creating gulfs between nodes in global supply chains. Photo credit: Shutterstock.com.

A coalition of 10 maritime groups, led by the International Association of Ports and Harbors (IAPH), is pressing the shipping industry to move aggressively toward digitalization goals as ports grapple with the impacts of the COVID-19 pandemic.

Among a list of nine priorities to be pursued by the coalition are broader use of single window-based port community systems, harmonization of data, and fostering port data sharing environments.

Those initiatives, if realized, would allow for a less “heterogeneous landscape” between ports globally than currently exists, the coalition said in a statement. “While some port communities seized the opportunities of the fourth industrial revolution and developed into full-fledged ‘smart’ ports, many others have barely grasped the essentials of digitalization and continue to struggle with larger reliance on personal interaction and paper-based transactions” as the norms for shipboard, ship-port interface and port-hinterland based exchanges,” it said.

The asymmetric development of port community systems has contributed to an environment where some global container gateways have made progress as digital data and service hubs, while others languish behind, dependent on either disconnected and antiquated central systems or the private sector to essentially manage critical port activities.

Paper and person-to-person not viable

“One of the major outcomes of the last eight weeks of intensive work of the [World Ports Sustainability Program] COVID-19 Task Force is the very urgent need for ports to digitalize processes and data exchanges as we move towards a post-COVID-19 modus operandi,” IAPH managing director Patrick Verhoeven said in the statement. “Exchanging paper by hand and relying on person-to-person interaction simply doesn’t cut the mustard anymore, neither from a safety nor efficiency standpoint.”

All are represented at the International Maritime Organization (IMO), which has established the so-called Facilitation Convention requirements, known as FAL, to support electronic transmission of data at ports. The coalition’s call to action urges ports to fully comply with those requirements to help make “the transition to full-fledged single-window systems,” more commonly known as port community systems.

The coalition is also encouraging ports to go beyond the FAL requirements and create harmonized data to “create additional e-business solutions, share data to optimize port calls, as well as effectively deploy resources by logistics providers to handle and clear cargo handling.”

Among the other notable initiatives in the call to action are one emphasizing that ports collectively “develop a practical roadmap that facilitates a digital port environment where port community service providers and users can securely share data.”

Other specific initiatives in the call to action include those governing vessel and terminal cyber security, promoting health and security in ports, and enabling the development of a standardized electronic bill of billing (eBL), a project major container lines have themselves taken on under the auspices of the Digital Container Shipping Association (DCSA).

The coalition said the acute need for port data and process standardization can only be achieved by “inter-governmental collaboration as the acceleration of digitalization will require change management at local, regional, and national levels.”