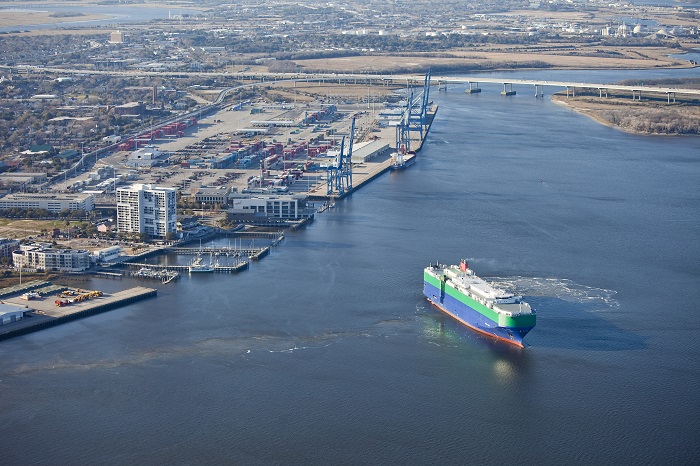 The Port of Charleston and CSX Transportation and Norfolk Southern Railway have extended their terminal hours owing to emergency cable repairs on the James B. Edwards Bridge over the Wando River. (Above: The Port of Charleston, South Carolina.) Photo credit: Shutterstock.com.

The Port of Charleston and two Class I railroads — CSX Transportation (CSX) and Norfolk Southern Railway (NS) — have extended their terminal hours owing to emergency cable repairs on the James B. Edwards Bridge over the Wando River, but beneficial cargo owners should expect longer transit times during the next four weeks.

The bridge is only minutes from the Wando Welch Terminal, the primary container terminal in Charleston, which translates into bumper-to-bumper traffic for truckers attempting to access cargo. The South Carolina Port Authority (SCPA) has temporarily extended gate hours to keep the freight flowing through the region.

Extended from: No service.

“There are alternate routes west from the terminal, and the eastbound lanes to the terminal remain open. While traffic is heavy, it is moving. We have been encouraged by gate activity over the past several days and appreciate the dedication and patience of all those in the Charleston port community, including our customers and motor carriers,” the SCPA wrote in a notice to customers.

South Carolina Gov. Henry McMaster wrote a letter to the state’s director of transportation asking the agency to open the unaffected eastbound span to two-way traffic while repairs are conducted on the westbound deck. Barring any problems, the repair work is due to be complete by June 11.

Erin Dhand, a spokesperson for the SCPA, told JOC.com that the hours beginning May 21 were extended three hours in the morning but reduced one hour in the evening after a thorough review of when trucks use the terminal.

“The last hour of the day [5 p.m. to 6 p.m.] is typically the least utilized hour of our schedule by truck drivers, and closing at 5 p.m. for the next few weeks will also potentially ease traffic during that peak travel hour for personal vehicles,” she said.

NS released a modified schedule for its Charleston terminal to drop off or pick up containers until the bridge is repaired.

A CSX spokesperson told JOC.com that it is currently notifying customers about adjusting hours in Charleston.

“CSX is aligning with the SCPA and expanding service hours — including Sundays — at its intermodal ramp in Charleston to better accommodate customers during the Wando Bridge closure,” the spokesperson said.