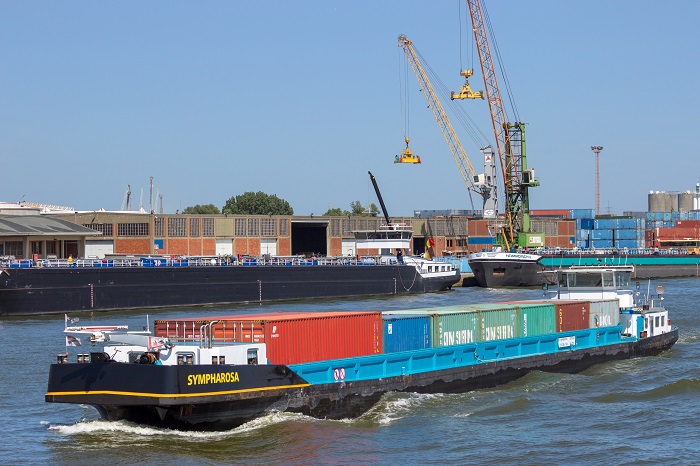 Antwerp wants the barge congestion afflicting the port to be resolved soon and has put in place measures to address the long-running issue. (Above: A barge travels at the Port of Antwerp.) Photo credit: Shutterstock.com.

The Port of Antwerp has joined its larger neighbor, Rotterdam, in unveiling measures to tackle the problem of barge congestion as rising container volume through Europe’s second-busiest port creates regular delays for the 2.6 million TEU that are transported to and from the inland terminals.

After a record 2017, Antwerp has just reported its best ever quarter with container volume in the first three months of 2018 growing by 10.7 percent to 2.7 million TEU. March set a new monthly record with 980,000 TEU.

But as welcome as the rising volume is, it has injected an urgency into the search for solutions to the chronic barge congestion problem that was measured in days during 2017 and has persisted into this year. One of the larger barge operators, Contargo, said waiting times in Antwerp were currently 24 to 48 hours.

Luc Arnouts, director of international relations at the Port of Antwerp, told JOC.com that longer waiting times for barges has developed in tandem with rapidly growing volume and the larger sizes of seagoing ships calling at the port with the big alliances, combined with labor shortages that create peak loads at terminals and long wait times for container barges.

The congestion was further impacted by the relocation of Mediterranean Shipping Co.’s 6 million-TEU capacity terminal from the right bank of the Scheldt River that bisects the port to the left bank. It was a large operation that took two years and added to the disruption created by the growing volume and ship sizes.

With mounting shipper displeasure at the sustained delays to its hinterland cargo, the Port of Antwerp in July 2017 brought all parties in the container supply chain together to seek out solutions to the complex problem. With such fragmented interests, it took 40 workshops before a working plan could be found that the port hopes will ease congestion in the coming summer months.

Each of the deep sea terminals in Antwerp will make a certain number of dedicated barge berths available with dedicated barge gangs to handle the volume. Barges will have central planning to manage schedules, with the three large terminals (PSA, MPET and DP World) carrying out a large-scale trial to deal with barge scheduling on a port-wide basis, which is aimed at simplifying and streamlining the entire scheduling process for all parties. A pilot project will be tested from September onwards, and if the results are positive it will be continued.

“The whole idea is to avoid this milk run,” said Arnouts. “It creates a lot of inefficiency at the terminals and a reaction from the operators that cannot suddenly move a gang to handle a few containers coming on or off a barge.”

“If you come in with 200 containers, the deepsea terminal is justified in placing a full gang on that barge. They cannot do that for 12 containers. Bundling increases the efficiency and reduces the cost of handling the containers,” he said.

Digitisation and centralisation of data is another focus of the port. In this area, NxtPort is taking the initiative and will develop and introduce new digital applications with the focus on sharing information sooner.

As a major hub port, also having an effect on the rising ship sizes and increasing peak volume are the three main container shipping alliances that were completely redrawn in April 2017. This complicated operations for many ports and their carrier customers, forcing the shipping lines to make multiple terminal calls or require thousands of inter-terminal truck moves. But the Port of Antwerp, maybe more by luck than by design, managed to avoid those issues with THE Alliance calling at the neighboring PSA North Sea and PSA Antwerp Europa terminals, 2M calling at MSC PSA European Terminal, and Ocean Alliance members calling at DP World’s Antwerp Gateway Terminal.

“We were able to create three huge hub terminals, one for each alliance, and that was very important for the carriers. For instance, Cosco Shipping and CMA CGM from the Ocean Alliance call at the same terminal,” Arnouts said.

The Port of Rotterdam has just completed its latest round of consultations with the industry to try to identify solutions, improve barge scheduling, and cut down the congestion. Its Nextlogic scheduling solution is being developed to better schedule barge calls, and 19 Dutch and international companies are now participating in the Inland Container Shipping Sector Consultations.

This week, the Port of Rotterdam Authority announced the first version of its new digital application, Pronto, that it claims will improve efficiency for the 30,000 vessels that call on Rotterdam every year. The app is expected to enable ships visiting the port to cut their wait time by an average of 20 percent.