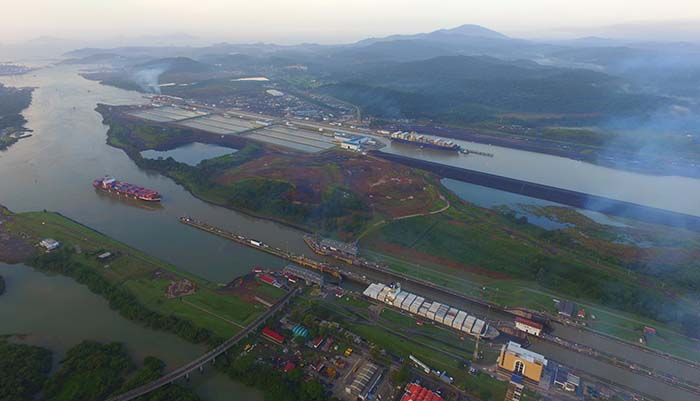 The new locks of the Panama Canal, pictured in the background, have not yet operated at their maximum draft because of a drought in the region. Photo credit: Panama Canal Authority.

The Panama Canal Authority said increased rainfall has permitted an increase to 45 feet in maximum allowable drafts at the canal’s new locks, which handled 238 New Panamax ships during their first three months of operation.

When the new locks opened on June 26, their tropical fresh water drafts were limited to 43 feet because a drought caused by the El Nino weather phenomenon had reduced water levels at Gatun Lake, the reservoir that feeds canal locks.

As rainfall gradually replenished the reservoirs, drafts were raised to 44 feet before this week’s increase. The new locks were built to handle vessels drawing as much as 50 feet. Eighteen huge basins permit recycling of 60 percent of the water passing through lock chambers.

The canal’s older locks, which opened in 1914, have 39.5-foot drafts when no restrictions are in place. At times during the last year, drafts at the older locks have been reduced to as little as 38 feet in order to conserve water.

The canal authority said it “will continue to monitor the level of Gatun Lake during the remainder of the rainy season, and may take necessary actions to minimize the possibility of imposing draft restrictions during the upcoming dry season.” Panama’s dry season typically runs from late October to March.

Since the new locks opened with fanfare on June 26, they have handled 238 New Panamax-size vessels. About 70 percent have been container ships. Other users of the new locks include car carriers, oil tankers, dry bulkers, and liquefied natural gas carriers.

During the decade before the locks opened, US East and Gulf coast ports spent billions of dollars to deepen harbors and expand facilities to handle an expected increase in vessel sizes. The old locks handled Panamax vessels of up to about 5,000 twenty-foot-equivalent units. New Panamax ships are as large as about 14,000 TEUs, depending on the ship’s characteristics.

Nine container services using New Panamax-size ships operate regularly through the locks, and a 10th is expected to start within a month, the canal authority said. Some of the larger ships call at Caribbean transshipment hubs, which are preparing for expected changes in carrier networks next year.

During the canal authority’s fiscal year that ended Sept. 30, the canal handled 13,114 ships with a total of 330.7 million Panama Canal tons, a measurement based on a modified calculation of ships’ net tonnage. That was the third-highest tonnage total in the canal's history.

"Despite the international shipping downturn this past year, we recorded one of the highest annual tonnage figures since the opening of the original canal 102 years ago," said Panama Canal Administrator Jorge L. Quijano. "This latest success reinforces the continued strategic importance of the route and the growing value that recent investments in the Canal will bring to the maritime industry."

The totals included the canal’s first LNG carriers, with 1.5 million Panama Canal tons. Canal officials expect this segment to increase with the availability of the larger locks, the increase in US shale energy production, and the lifting of a 40-year ban on US oil exports.

How to Improve OTIF: 15 Tips for On Time and In Full Delivery
END_OF_DOCUMENT_TOKEN_TO_BE_REPLACED