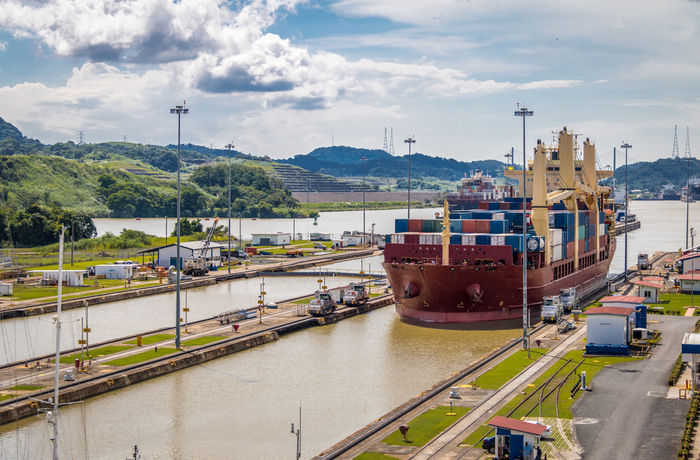 The Panama Canal Authority is temporarily allowing ship operators to pay their transit reservation fees when other fees are due, rather than weeks in advance. Photo credit: Shutterstock.com.

Panama Canal administrator Ricaurte Vásquez said the number of container ship transits in May will reveal the extent of the COVID-19 impact on containerized trade as the waterway prepares for a long-term future marked more by regional trade than global trade.

The disruption caused by the coronavirus disease 2019 (COVID-19) will accelerate some cargo owners’ effort to reduce risk by shortening their supply chains feeding the United States, whether that’s shifting production from Asia to Mexico or even to the United States, Vasquez said in a media conference call Thursday. While the extent of the regionalization of containerized trade won’t spur a complete shift in manufacturing and the changes will be marginal, he said the canal was speeding up plans to understand and address them.

“If manufacturing becomes more robotic, then places with cheap energy will replace places with low-cost labor,” said Vásquez, adding that tariffs and overall rising labor costs in Asian countries are spurring shippers to look elsewhere to expand. Given the pandemic originated from China, he said companies will try to “disperse risk from single-sourcing into multiple-sourcing.”

He noted that manufactured products have a higher tolerance to a rise in transportation costs, leading the canal authority to believe it will see sharper growth in bulk business than container shipment and motor vehicles. “It’s a process, and it’s going to be a slow process, but we need to make sure we have an action plan that accommodates shifts of demand if that happens,” Vásquez said.

Reducing tolls is one option to attract more ship traffic amid slow growth pressures, but Vásquez questions whether tolls make up a large enough share of total transportation costs to change the cost equation of manufacturers. The Panama Canal Authority doesn’t have the autonomy of its rival Suez Canal to reduce tolls, as the latter did last month to counter container lines diverting ships from the waterway to sail around the Cape of Good Hope due to low fuel prices.

Further reductions in Panama Canal tolls would have to be developed internally, then shared via a hearing, and, ultimately, require the approval of the Panamanian government. Panama’s new toll structure, which includes lower rates for container ships via the expansion of a “loyalty program,” took effect April 1.

Ensuring the Panama Canal has sufficient water depths to guarantee transits for container ships is essential to responding to potential changes in demand, Vásquez said. Reduced rainfall in four of the last six years has forced the canal to impose draft restrictions, reducing the loads that larger container vessels can ship.

While the canal has taken short-term actions to better ensure water supply, there’s a need for a longer-term approach, which Vásquez estimates will cost on par to the $5.25 billion lock expansion completed in 2016. The value of the new locks allowing larger ships — those with capacities up to 14,500 TEU — is for naught if the full water draft can’t be guaranteed

By June, Vásquez said the authority aims to put out a request for proposals to engineering firms to address the long-term response to reduced rainfall. He estimates it will take five months to review RFPs and a month to award contracts, with expectations that work would begin immediately.

He added the authority was looking at ways to boost canal capacity through more efficient scheduling, particularly at night, if safety could be assured. Technology can also provide better navigational guidance for more efficient orchestration of tugs and other services tied to waterway transits. In the near term, the port authority is temporarily allowing ship operators to pay their transit reservation fees when other fees are due, rather than weeks in advance.

Schneider to leave BNSF for Union Pacific in 2023