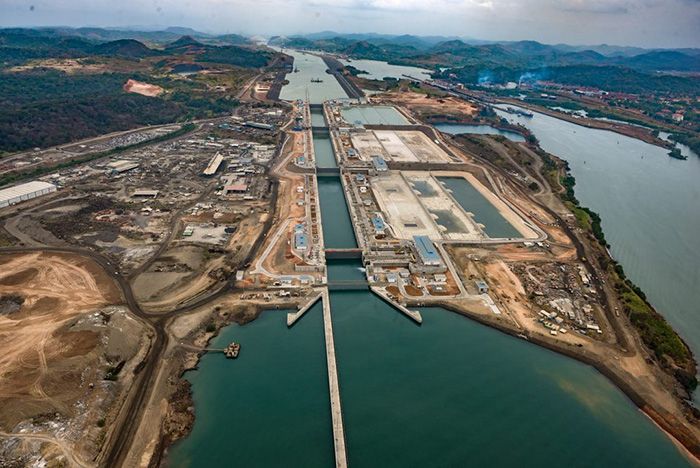 The Panama Canal Authority said its new locks will be inaugurated June 26, more than two years after the original completion target.

Canal officials announced the date for the opening ceremony while unveiling a training center with a scale model that will be used to train pilots and tugboat captains to operate in the expanded canal.

“The dream of expansion will become a reality when we inaugurate the biggest infrastructure project in the history of the canal and the country of Panama,” said canal administrator Jorge L. Quijano.

The new locks will accommodate vessels with capacities of up to 14,000 twenty-foot-equivalent units, depending on the vessel design. The current Panamax size is 4,500-5,000 TEUs.

Operators of other ships, including pure car and truck carriers, bulk carriers and tankers, also will be able to take advantage of the new locks’ larger dimensions.

Carriers have been planning route realignments that the new canal will make possible, but canal officials and most analysts expect the new routings to be implemented gradually over several months after the new locks open.

Canal officials said work on the expansion is 97 percent complete, and that final testing will continue in advance of the June 26 opening ceremony.

Work on the expanded locks began in 2007. The canal authority’s original schedule called for work to be completed by April 2014, the 100th anniversary of the canal’s opening.

That schedule was pushed back several times by construction delays and other developments, including a dispute with the international construction consortium handling the project, and cracks detected last fall in one of the new locks on the canal’s Pacific side.

The contractor has worked to correct the problem by inserting 2 ¼-inch-diameter steel reinforcing rods into the concrete sills, and the canal authority said last month that the reinforced locks had been successfully tested.

The expansion’s original cost was estimated at $5.25 billion, but the delays and overruns are reported to have pushed the final bill higher.

The June 26 dedication of the new locks is expected to be followed by the start of commercial operation during the third quarter.

Panama President Juan Carlos Varela joined other Panamanian officials in dedicating the canal’s training center for pilots and tug captains. The 35.3-acre center features two lakes connected by a channel modeled after the canal's Culebra Cut. The new facility features docking bays, replicas of the new and existing locks, gates, and chambers, all at a 1:25 scale.

The training center includes scale-model Panama Canal tugboats and ships including bulk carriers modeled after the Nord Delphinus and a container ship modeled after the Maersk Edinburgh. A model of a liquefied natural gas carrier will be delivered by September, canal officials said.

The facility features wave and wind generators, and complements training already provided at the canal’s Center of Simulation, Research and Maritime Development through 360-degree training simulations and courses.

How to Improve OTIF: 15 Tips for On Time and In Full Delivery
END_OF_DOCUMENT_TOKEN_TO_BE_REPLACED