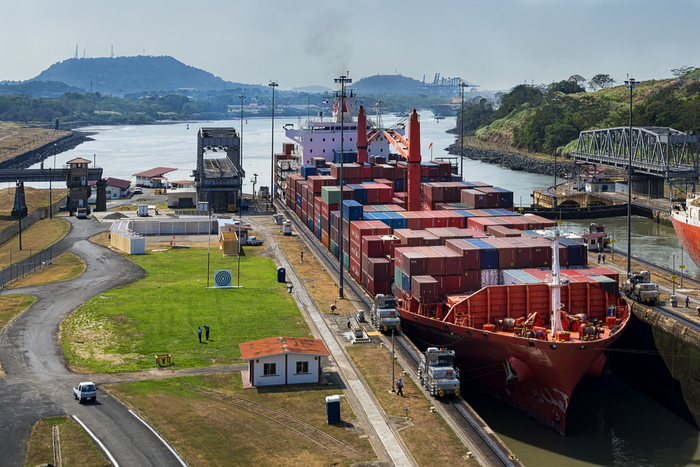 The Panama Canal is facing a brutal dry season and has draft restrictions in place. Not a good position to be in considering that it takes 55 million gallons of fresh water per day to bring ships through the waterway. Photo credit: Shutterstock.com.

Shallower Panama Canal drafts will force some container lines to reduce the amount of cargo loaded on to vessels from Asia as the waterway announces even sharper draft restrictions.

The Panama Canal Authority (ACP) on Friday announced the sixth reduction in draft this year to a maximum of 43 feet, effective May 28, for the Neopanamax locks on Gatun Lake as water levels continue to fall. The canal informs customers of draft adjustments through the Advisories to Shipping website at least four weeks in advance to allow time for proper planning.

Further draft adjustments will be announced in 12-inch decrements, with advance notice of four weeks, the ACP said.

Carriers anxious to avoid having containers stranded at the entrance to the canal have told JOC.com that loadings on vessels from Asia will have been trimmed by at least 10 percent.

According to ACP data, almost a quarter of the ships transiting the Panama Canal are in the Neopanamax segment, with a capacity of between 12,000 TEU and 14,500 TEU. The Neopanamax locks are designed to allow ships with a draft up to 50 feet to transit, with the maximum depth based on the deepest point of Gatun Lake.

Widening the canal to accommodate larger vessels that have a deeper draft has exacerbated a growing problem with water depth. According to the authority, precipitation registered in the Panama Canal watershed during December 2018 was 90 percent below the historical average, causing water levels in the Gatun and Madden lakes to drop below levels expected at this time of year.

“As a result, the Panama Canal deemed it necessary to implement water conservation measures to delay implementation of seasonal draft adjustments and to minimize the adverse effect that these may have on our customers,” the canal authority said in a statement.

Highlighting the growing water problem in an interview with JOC.com last year, Panama Canal administrator Jorge Quijano said weather in the region has become more erratic, with rainfall more intense and less spaced out compared with decades ago. He noted increased demand from Panama’s growing population was also adding to water needs.

“If we are going to have more transits, then you will have to have more water,” Quijano said, adding that it takes 55 million gallons of fresh water a day to bring ships through the waterway.

The restrictions come as the ACP is looking for ways to further increase the size of ships than can transit the canal following the opening of the expanded set of locks in summer of 2016. The authority is studying how to construct a third, multipurpose reservoir and whether there is a need for an even larger set of locks that could handle vessels with a capacity greater than 14,800 TEU.

But it’s not only about the size of the vessels. Quijano also expects the frequency of container ship transits to increase as carriers seek to mitigate rising fuel costs driven by the International Maritime Organization’s low-sulfur fuel rule, which takes effect Jan. 1, 2020.

He expects to attract more liner services away from the Suez Canal as ocean carriers look for cost savings. The higher cost of low-sulfur fuel can be offset by taking the shorter route from Asia to the US East Coast through the Panama Canal, although fees to transit through the Central American waterway are higher than those charged by the Suez.

The Suez Canal Authority in December extended a fee discount of up to 65 percent for container ships sailing from the US East Coast to South Asia and Southeast Asia.

If fuel costs are a concern

Permalink Submitted by bill.freeto@gma... on May 8, 2019 6:40PM EDT
If fuel costs are a concern leading some carriers to try shifting capacity from the Suez to the Panama Canal for Asia-US East Coast all-water, those same fuel cost issues could cause carriers and shippers to shift from the Panama Canal to US West Coast gateways.
Port News›Panama Canal News
Maritime News›Container Lines
Africa›Egypt
Asia
Central America›Panama
Europe
North America›United States
Southeast Asia