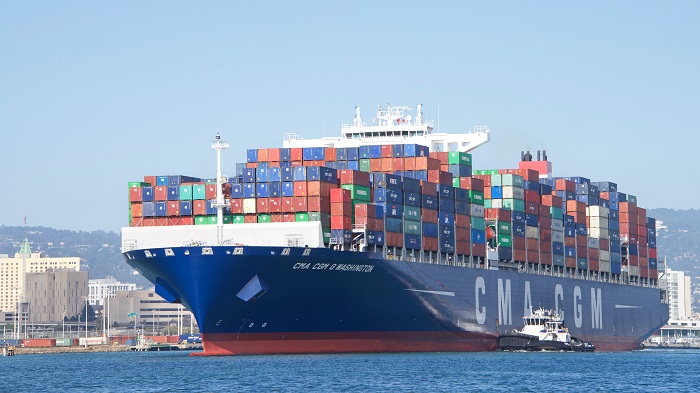 For container lines, the exchange of more boxes per call is a significant benefit in terms of greater port cost efficiency, but benefits for the other key supply chain stakeholders are less clear. Photo credit: Shutterstock.com.

Container lines are the only clear beneficiary of global vessel and call size growth, but the results are mixed, with, arguably, a generally negative impact on terminal operators and beneficial cargo owners (BCOs).

Analysis of the latest port call data in the IHS Markit/JOC Port Productivity Database shows that from the first half of 2016 to the first half of 2018 average vessel size — TEU nominal capacity per port call — increased 8 percent while average call size — quantity of containers exchanged per port call — jumped 21 perent, which is good news for shipping lines, but creates some significant problems for terminal operators and BCOs.

The data were provided by the largest deepsea container ship operators, who collectively control more than 66 percent of the world’s cellular fleet. It shows a ship size growth of 5 percent from the first half of 2017 to the first half of 2018, but with a stagnant call size development over the period.

“This is likely due to over-deployment in the first half of 2018 resulting in lower load factors, which was corrected through deployed capacity reductions in May and June of this year,” said Andy Lane, a partner with CTI Consultancy based in Singapore.

For container lines, the exchange of more boxes per call is a significant benefit in terms of greater port cost efficiency, but benefits for the other key supply chain stakeholders are less clear.

Among the world’s largest 30 ports, call size outstripped vessel size by 14 percentage points, with a growth of 20 percent versus a vessel size growth of 6 percent.

This can be very challenging for multi-terminal hub ports such as Busan and Hong Kong.

A study on Hong Kong port released last week found that deployment of larger ships and the larger alliance groupings has led to a critical rise in the number of inter-terminal transfers, resulting in higher charges to shipping lines, extra handling time for shipments, and an increased burden on the port’s roads and resources.

“The industry has evolved, with mega vessels [mega-ships], more cargo alliances, and a surge in transshipment containers. All of this has resulted in a complex operating environment for the Hong Kong Port, which consists of five different terminal operators,” said the study by the Hang Seng Management College.

The data also show that among the world’s 30 largest ports there are several, including Tianjin in north China and Ho Chi Minh City in Vietnam, where call sizes grew at a much slower rate than vessel size, leading to a decrease in utilization of berths and other key assets.

While bigger ships reduce per unit costs, which potentially supports lower freight rates for BCOs, there is a clear trade-off in terms of service quality.

Quayside productivity not evolving as fast

With vessels spending relatively more time in port, and not wishing to steam faster, this has led to an increase in the number of vessels deployed per service and longer cargo transit times.

As a result, BCOs have had to adapt their supply chains to fewer port-pair products and reduced departure frequency, as a direct result of recent industry consolidation and the new alliance structures.

Lane suggested this is not consistent with how supply chains need to develop. “The rise in e-commerce activity means that BCOs would prefer a continuous conveyor carrying smaller shipments, however we have moved in the opposite direction.”

As to why terminal and port productivity has not increased with the growing call size, Lane said there is no clear correlation between vessel size and gross crane productivity trends; that noted, individual quay cranes need to complete a far higher quantity of container moves on the ships with larger call sizes, he said.

“Increases in ship capacity have been achieved mainly through width [and height] rather than length development. This poses a challenge to ship stowage coordinators to provide an optimal crane split for terminals.

“Even with a higher crane split, conventional terminals might not have the required crane density to fully capitalize on this. With yard operations typically the terminal bottleneck, adding new cranes will not deliver shorter port stays.”

There is a concomitant

Permalink Submitted by ferrullig@minds... on Aug 30, 2018 11:52AM EDT
There is a concomitant equation between increased volumes and pressure on terminal, it isn't just the vessel sizes. The vessel sizes effect those terminals who haven't upgraded their equipment to handle them - meaning in essence virtually all US terminals. Some have taken steps to upgrade, but the big ships (15,000+ teus) hit the water 12 years ago and many terminals have only started the necessary upgrades in the last few years, with none in the US capable of truly handling the 18,000 to 20,000 teu ships. Then there is the labor issue, especially on the US West Coast, where average crane productivity hasn't changed in two decades, that's the bottle neck. Will it change? If not, then why spend the money to upgrade the equipment? Complex issues with no silver bullet, again, especially in the US.
Port News
Maritime News›Ships & Shipbuilding
Port News›Port Productivity
Africa
Asia
Australia/Oceania
Europe
Middle East
North America
South America