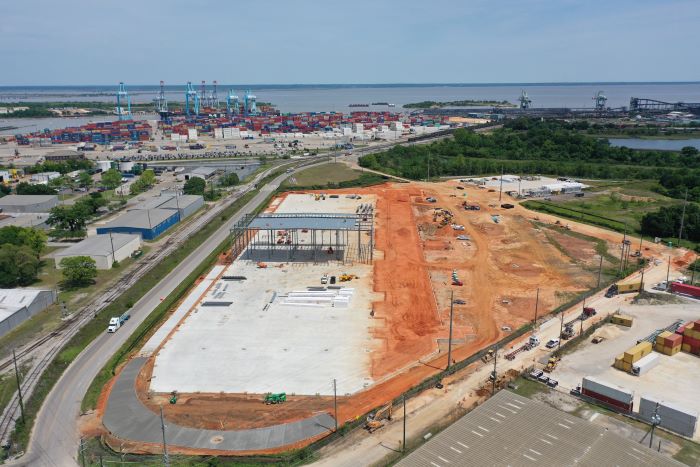 MTC Logistics is investing about $61 million in its International Distribution Center facility at the Port of Mobile, which is due to open in 2021. Photo credit: MTC Logistics.

A new cold storage facility set to open next year at the Port of Mobile will give it the necessary capacity to handle rising poultry shipments out of the Southeast as the port looks to capitalize on growing exports of refrigerated goods from the Gulf Coast.

MTC Logistics is investing approximately $61 million in its International Distribution Center facility, which will provide 40,000 pallet positions along with blast freezing, port drayage, and less-than-truckload (LTL) consolidation in a high-density, automated environment.

Imports of seafood, fruits, and vegetables, mostly all frozen, will provide a balanced supply of reefer containers and equipment to support the poultry exports, which will arrive fresh at MTC’s facility then undergo blast freezing before being exported.

US Department of Agriculture inspectors will be stationed at the MTC facility for imports and exports and will be “very important in our supply chain,” Ferguson said.

On-site inspectors will facilitate the clearance of “imported meat, such as pork and beef, while all poultry exports are required to be inspected, unless it’s going to Puerto Rico or another US territory,” he said.

Ferguson noted the Port of Mobile is strategically located with strong road and rail links. “It’s a short trip to Atlanta, the Georgia area, and all throughout the Southeast,” he said. “If you want access to the distribution centers in Texas, it’s dead center. Even access to the Midwest is possible.”

The MTC facility will be located adjacent to APM Terminals. The close proximity to the terminal, yet not actually being within the port, allows easier and quicker access to the facility because a Transportation Worker Identification Credential (TWIC) isn’t required outside the port’s boundary.

“This is the best of both worlds,” said Ferguson, adding that MTC’s in-house drayage company will have TWIC cards to access the port property as needed.

“We also have permits with the city and the state to max-load the containers, so there are no weight restrictions,” he said. “That allows us to drive value for our customers, especially on the protein side, because the heavier you can load, the better.”

The new facility will handle frozen food. However, Ferguson doesn’t rule out the possibility of adding a second facility with refrigerated capabilities to handle other perishables, such as craft beer and spirits.

“These facilities that we build have a really long life span, 30 to 40 years at a minimum,” he said. “And with the dynamics and population growth in the Southeast, we’re really bullish on this facility. We’re in it for the long haul.”