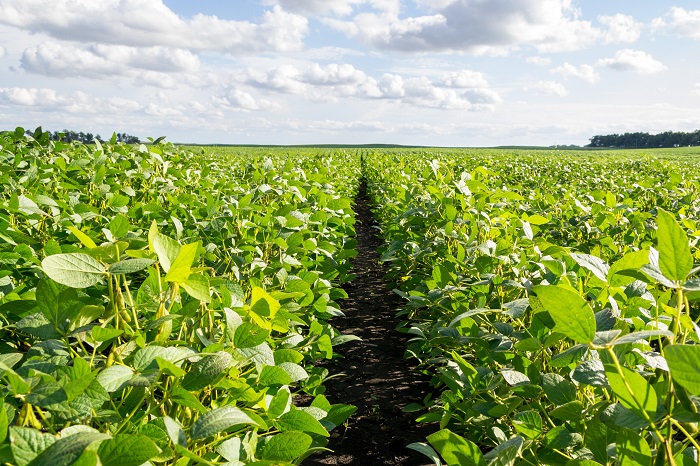 Aggressive carrier pricing and less-costly rail rates to the East Coast will continue to push exports and imports to East Coast gateways, including US soy beans for export. Photo credit: Shutterstock.

The surge in containerized soybean exports from East Coast ports, which spells a troubling drop in market share at West Coast ports, confirms that aggressive carrier pricing and less-costly rail rates to the East Coast will continue to push exports and imports to East Coast gateways, said Ed Zaninelli, president of Griffin Creek Consulting. On imports, the spread between East and West Coast spot rates, once as much as $1,000 per FEU, had dropped below $500 per FEU.

Aggressive carrier pricing from the East Coast coupled with inflexible intermodal rail pricing to the West Coast is a main driver in the market share shift, according to the Lansing Trade Group, a commodity trading and merchandising firm. These developments have helped to open up East Coast ports for soybean exporters in Ohio, Indiana, and Michigan, who in the past shipped largely through the West Coast. US importers this past summer and autumn were attracted to East Coast ports because of a surge in vessel capacity and aggressive carrier pricing. Outbound vessels almost always have excess capacity due to the large US trade imbalance between imports and exports. Carriers enter capacity into a trade lane based on the higher-paying imports, not the low-paying export commodities, so space on outbound sailings will continue to be plentiful.

Carriers responded to the Panama Canal expansion in June 2016 and the increase in elevation of the Bayonne Bridge in New York-New Jersey last summer to increase the size of the vessels in their East Coast services from 5,000 TEU capacity to 10,000 TEU or greater.

Zaninelli, who formerly managed the export trade for OOCL, said Midwest soybean exporters wanted to ship through the East Coast for a number of years but “carriers didn’t have the space.” Now the carriers have surplus space on outbound vessels, and they are pricing to fill it.

Zaninelli said soybean shippers from the Ohio Valley pay a combined rail-ocean rate to China of about $1,200 per FEU, compared with about $1,600 to $1,800 per FEU combined rail-ocean rate through the West Coast. Soybean shippers in the Ohio Valley pay a rail rate of about $500 to $600 per container to the East Coast, or about half the rail cost to the West Coast, he said. Ocean rates from the East Coast are under a great deal of pressure as well because “there is so much space out there” to the East Coast, he said.

Furthermore, in a message that the International Longshoremen’s Association (ILA) and United States Maritime Alliance (USMX) should heed as they ponder whether to extend their master contract beyond the Sept. 30, 2018, expiration date, soybean shippers seek port stability for their exports. Many were hurt by excessive delays during the West Coast labor disruptions in the 2014 to 2015 contract negotiations between the International Longshore and Warehouse Union (ILWU) and the Pacific Maritime Association (PMA).

Mike Steenhoek, executive director of the Soy Transportation Coalition, said he still receives testimonials from soybean shippers who were caught up in the West Coast port congestion during and for some months after the labor disruptions. “If it’s possible to ship through the East Coast, they’re open to it,” he said. Sporadic labor uncertainty and the perception of an unreliable longshore labor force have contributed to a loss of West Coast share of US imports from Asia to 65.3 percent 78 percent in 2005.

The ILWU and PMA last year agreed to extend the West Coast waterfront contract to July 1, 2022, with the likelihood of labor peace for five years. Prospects for extension of the ILA-USMX were suspended last month.

Steenhoek added that soybean shippers are also open to shipping through Vancouver and Prince Rupert. The Canadian railroads have intermodal service from the ports to the US Midwest, and the Canadian railroads are much more aggressive on pricing than the US railroads.  However, Prince Rupert has experienced longer-than-usual container dwell times and port and rail capacity issues since last autumn, which could discourage soybean shippers from changing their shipping patterns right now.

Another element that fits into soybean logistics is container availability. Shippers in the Midwest have access to empty containers because the hubs of Chicago, Detroit, and Columbus, Ohio, usually generate a surplus of empties that can be refilled with export commodities, Zaninelli said. Even though some of those containers entered the region with Asian imports that were shipped through the West Coast, the penalty charged by western railroads for not returning the containers to the West Coast is not a deterrent, he said.

Soybean exporters earlier in the decade experienced capacity issues at ports, where the product is often transloaded from rail cars to marine containers, and on the intermodal rail system. That is no longer the case. “In today’s market, there is no shortage of capacity, both transload and port,” Lansing Trade Group reported.

Soybeans are considered an export product with a bright present and future. Containerized soybean exports in the first 11 months of 2017 increased 25.2 percent to 191,653 TEU, according to PIERS. Exports to China increased 13.4 percent to 20,621. China now represents 10.8 percent of the US market share of containerized soybean exports, up from 7.1 percent in 2016. Steenhoek noted that Asia’s growing middle class is consuming more meat, and soybeans are used in livestock feed.

China has been a difficult market of late for shippers of some commodities, especially wastepaper, because it has been cracking down on adulterated shipments through tough environmental policies and inspection protocols. Lansing noted that soybean exports have not been affected yet, but in a related area China has launched an anti-dumping, anti-subsidy probe of sorghum imports from the United States.

It is too early to project soybean export volumes in 2018, although competition from Brazil will be strong because it is getting ready to harvest a “monster crop,” Lansing said. The United States had a strong crop last autumn, so if nothing else prices will be under pressure this year, Steenhoek said.

It's a price driven commodity

Permalink Submitted by ferrullig@minds... on Feb 6, 2018 11:07AM EST
It's a price driven commodity and if there is ample space on the east coast, as there is today, the Ohio Valley is a lot closer to those ports than the West Coast. The ocean carriers are quick to adjust their prices to re-capture lost volumes, but they can't make up the differences in the inland that the rails charge. And the rails are profit oriented, not market share driven, so they will watch this play out.
Port News›US Ports
North America