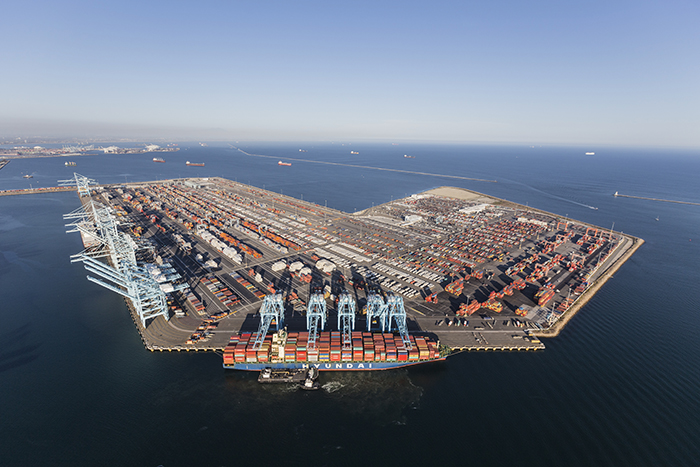 APM Terminals’ plans to automate a portion of the Pier 400 facility at the Port of Los Angeles have been delayed for at least another 28 days. Photo credit: Shutterstock.com.

As longshore pushback against automating a Los Angeles marine terminal mounts, more delays like the port commission’s 28-day project pause may be ahead, but dockworkers can’t change the coastwide contract they agreed to that allows for the deployment of certain automated terminal equipment.

With the backing of Los Angeles Mayor Eric Garcetti, the International Longshore and Warehouse Union (ILWU) Thursday convinced the Los Angeles harbor commission to delay issuance of a construction permit that would allow APM Terminals to automate a 100-acre portion of its Pier 400 terminal, but the move is unlikely to derail automation efforts at West Coast ports in the long term.

In a letter to the commission, Garcetti recommended putting the project on hold to “take full advantage of the 28 calendar days afforded by Section 6.6.1 of the port master plan to consider the facts and arguments laid out today by port staff, the union, the employer, and the public ... In parallel, these discussions should serve as the basis of a new task force to explore automation and its impacts on the future of the Port of Los Angeles and others across the state.”

The TraPac terminal in Los Angeles and Long Beach Container Terminal’s (LBCT’s) Middle Harbor project are wrapping up automation projects that began in 2015. The ILWU, like its counterpart  on the East Coast, the International Longshoremen’s Association (ILA), is philosophically opposed to automation because it reduces man-hours at the individual facilities. For the same reason, terminal operator employers in the US and Europe are slowly moving toward automation because it reduces labor costs as well as allows terminals to densify their operations, thereby handling greater container volumes on existing footprints. LBCT’s Middle Harbor, when fully operational next year, will have an annual throughput capacity of more than 3 million TEU. Long Beach’s six container terminals last year handled 8.1 million laden and empty TEU, according to port statistics.

The ILWU, which wields considerable power as the sole provider of longshore labor at all West Coast ports, is attempting to block issuance of the necessary construction permit because it cannot use its coastwide contract with the Pacific Maritime Association (PMA) to prevent APM from automating. The terminal operator’s plans for Pier 400 include the use of automated straddle carrier yard tractors to move containers from the dock to the container stacks, and from the stacks to the street trucks that haul the shipments to rail ramps and distribution facilities in the region.

James McKenna, president of the PMA, told the harbor commission meeting that the 2008 coastwide contract gives individual employers “explicit authority” to implement unmanned cargo-handling equipment such as automated stacking cranes, guided vehicles, and auto-strads. In fact, language in the contract even stipulates the union “will not interfere with implementation.” In exchange, the ILWU secured enhanced benefits, including a top pension benefit of more than $95,000 per year upon retirement, according to the waterfront contract. Since the 2008 contract was signed, officials say, the cost of the pension increase to employers has been more than $800 million.

Instead of opposing the Pier 400 plans on contractual grounds, the ILWU is attempting to block automation by asking the harbor commission to deny a Level 1 construction permit to build the supporting infrastructure for automation, and the union seems to be garnering support from Los Angeles politicians. Gary Herrera, vice president of ILWU Local 13, told the commission this matter is not about the ILWU-PMA contract, but rather about the loss of jobs. He said robots do not support local stores and businesses and robots do not vote.

The ILWU has a strong public support in the San Pedro neighborhood surrounding the Los Angeles-Long Beach port complex, with shop-owners displaying pro-union signs and local office holders urging the harbor commission to place the preservation of middle-class jobs above corporate profits. Even so, blocking the construction permit will be a challenge. Level 1 permit approval under the California Coastal Act means the project has been judged as having minimal impact on surrounding neighborhoods and the environment. Gene Seroka, executive director of the Port of Los Angeles, on Thursday urged the commission to approve the permit because it meets the conditions for infrastructure development set forth in the port’s master plan.

APM Terminals issued a statement to the same effect. “APM Terminals’ request meets all of the requirements of the port master plan, the Coastal Act and numerous environmental mandates of the port, city, and state,” the company said.

"We are confident that modernizing Pier 400 will keep the Port of LA competitive in an increasingly challenging environment that has seen a significant loss of market share for cargo on the West Coast. Keeping cargo in Southern California supports jobs and the local economy. Losing that cargo to other markets hurts the economy and ILWU members."

The longshore unions on both coasts have a long history of opposing various modernization efforts but in the end capitulating to progress in return for impressive gains in wages and benefits. The ILWU and waterfront employers have had more than 50 years of contentious battles, dating back to the historic Mechanization and Modernization (M&M) Agreement in the early 1960s, which allowed employers to transition from breakbulk to containerization.

As a result of the M&M Agreement, West Coast ports became the primary US gateway for imports from Asia, which by the 1990s made the eastbound trans-Pacific the largest trade lane in North America. The ILA at the time resisted containerization under its long-time president Teddy Gleason, who called a series of strikes that at first attempted to slow containerization, before turning it to the benefit of longshoremen by substituting higher wages and benefits to compensate dockworkers for the loss of jobs.

This give and take during West Coast contract negotiations resulted from a similar strategy that progressively improved ILWU wages and benefits, making longshore jobs among the most desirable blue-collar jobs in the US. According to the PMA’s 2017 annual report, a full-time longshoreman working at least 2,000 hours a year earned more than $163,000, and the average marine clerk salary exceeded $186,000 for the same number of hours.

However, employers face the conundrum of convincing the unions that although individual facilities that are automated can experience a 40 percent or greater loss of certain jobs, automation not only creates new types of jobs, but equally as important, allows terminals to handle increasing container volumes on a waterfront that has virtually no developable land left. PMA numbers show that even though the two automated terminals in Los Angeles-Long Beach experienced general longshore and marine clerk job losses at first, overall ILWU employment in the harbor has increased by 1,061 longshore jobs and 97 marine clerk jobs since 2015.

Truckers note that automated terminals, with the container stacks repositioned perpendicularly between the vessel and the gate, consistently produce improved turn times because the delivery point from the stack to the incoming trucker is segregated close to the in-gate, and vessel traffic is separated from street traffic. According to the HTA, the average truck turn time at the automated portion of LBCT last month was 51 minutes, compared with 90 minutes for the entire complex.

Weston LaBar, CEO of the trucking association, said a crucial feature of the automated terminal is its consistency. “It’s extremely consistent, with the number of turns greater than two hours almost none,” he said.