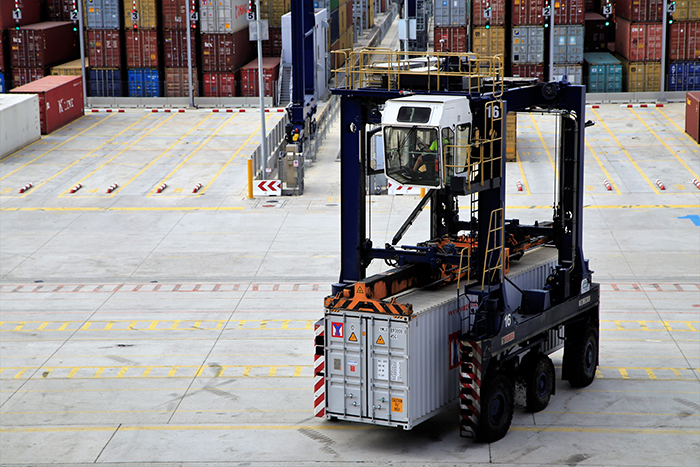 The International Transport Workers’ Federation (ITF) and International Longshore and Warehouse Union (ILWU) are looking to derail an APM Terminals plan to deploy unmanned straddle carriers at its Pier 400 facility in the Port of Los Angeles. Photo credit: Shutterstock.com.

The International Longshore and Warehouse Union (ILWU) and the International Transport Workers’ Federation (ITF) Tuesday charged that in automating a portion of the APM Terminals Pier 400 facility in Los Angeles, the Maersk affiliate is sacrificing productivity for lower labor costs.

Jacqueline Smith, maritime coordinator at the ITF, an intergovernmental agency within the Organisation for Economic Co-operation and Development (OECD), and Dane Jones, ILWU business agent and treasurer, addressed the A.P. Moeller-Maersk general meeting in Copenhagen on the financial and social impacts of automation, including APM’s plans to introduce autonomous straddle carrier yard tractors in a 100-acre portion of the 440-acre terminal.

A port spokesperson said Tuesday the Los Angeles Harbor Commission, after several delays, is scheduled to decide at its April 16 meeting whether to approve a construction permit needed by APM to move forward with the project. Longshore unions in the US and Europe are becoming increasingly concerned about the job losses that inevitably result from automation of container terminals. Unlike the International Longshoremen’s Association on the East and Gulf coasts, the ILWU in its 2008 contract agreed to allow terminal operators to automate their facilities without interference in exchange for concessions from management on pensions and other benefits. The maximum pension for full-time longshoremen now exceeds $95,000 a year.

For their part, terminal operators argue automation is necessary in some cases in order to handle growing container volumes on limited footprints, while also complying with state and federal environmental requirements. California has the strictest diesel emissions regulations in the country. Since much of the automated equipment is electrified, or runs on battery power, automation will eventually be necessary to meet the 2030 zero-emission standards for cargo-handling equipment set forth in the joint Los Angeles-Long Beach Clean Air Action Plan (CAAP).

Larry Nye, head of port planning at Moffatt & Nichol, told JOC.com the CAAP will drive other terminal operators toward automation as they replace cargo-handling equipment in the coming years if they are to achieve zero emissions. Once such equipment is commercially viable, it will be up to individual operators to decide whether to deploy autonomous versions, as will likely be the case on the West Coast, or continue to have them be driven by longshoremen, as will likely happen on the East Coast. Rich Ceci, senior vice president of technology and projects at Virginia International Terminals, told JOC.com that semi-automated East Coast terminals may continue to rely upon manually operated yard tractors because each terminal tends to serve a number of shipping lines so the sorting and delivery of containers is complex. West Coast terminals, many of which are affiliated with carriers, handle fewer lines at each terminal, so sorting of containers is simpler, Ceci said.

Citing a McKinsey & Co. study that concluded automated terminals are generally less productive than manual operations, Jones questioned the business case for the APM project. “Automation is expensive. Whether fully or semi-automated, it requires hundreds of millions, if not billions, to construct or retrofit a full-sized modern container facility,” he said. “A terminal operator must also pay for facility upgrades, software solutions, product support and maintenance. A marine terminal earns revenue by moving cargo, and automated container ports do not move cargo as quickly or profitably as those worked by people.”

Marine engineers and terminal planners agree that if measured purely in container moves per hour, per ship-to-shore crane, manually operated terminals are more efficient. In port terminal terms, automation refers to the use of unmanned horizontal ground transportation, such as the auto-strads APM intends to use, or the automated guided vehicles deployed at the fully automated Long Beach Container Terminal (LBCT) facility. Those vehicles shuttle containers between the ship-to-shore cranes and the container stacks in the yard.

Terminal planners, on the other hand, say that when measured over a 24-hour day, automated cargo-handling equipment results in improved performance because the vehicles produce consistent, round-the-clock productivity. And because automated terminals separate vessel traffic from street traffic, truck turn times are superior. The Harbor Trucking Association’s monthly report on the 12 container terminals in Los Angeles-Long Beach consistently shows turn times at the LBCT Middle Harbor facility are 50 minutes or less, compared with a portwide average of about 90 minutes.

Although the primary focus of its argument is around terminal productivity, the ILWU is also concerned that APM is introducing into the US a model for automation that will be much less costly to develop than the $1.4 billion LBCT facility because auto-strads require only minor alterations to the physical structure of the terminal. If the auto-strad model lives up to its expectations, it will offer a scalable alternative for terminals that handle less than 1 million TEU a year.

The decision to automate is made individually by terminals, some of which do not see it as being viable for their operations, even at busy ports that have no more land upon which to build more container facilities. Sal Ferrigno, vice president of SSA Marine in Southern California, told the Long Beach Pulse of the Ports symposium last week that the sprawling Los Angeles-Long Beach port complex will reach capacity by 2022 “with the current mode of operation.” However, Ferrigno said SSA is not prepared to invest in automation, with 20 years required for a return on investment.

SSA advocates expanded use of peel-off piles in which importers and their trucking providers pool cargo volumes into stacks of 100 or more containers. Under the random-access model that most US terminals follow, a trucker arrives at a terminal to pick up a specific container that may be buried three or four deep in the container stack. Peel-off piles allow truckers to line up and take delivery of the first available container from the top of the pile, essentially eliminating the time spent waiting for a specific box to be culled from the stacks. “This method will reduce the footprint required for container storage and reduce truck turn times,” Ferrigno said.

Smith urged APM, which operates terminals in container ports around the world, to maintain a constructive dialogue with labor unions to increase productivity while also recognizing the social and community impacts of automation on workers. Under the company’s own corporate social responsibility policies, Maersk has a responsibility to “reduce negative and enhance positive impacts on people, society and environment,” she said.

In a written response, APM Terminals noted that West Coast ports are competing for market share with other US and Canadian ports in an increasingly challenging environment. “Keeping cargo in Southern California supports jobs and the local economy. Losing that cargo to other markets hurts the economy and ILWU members,” the company said.