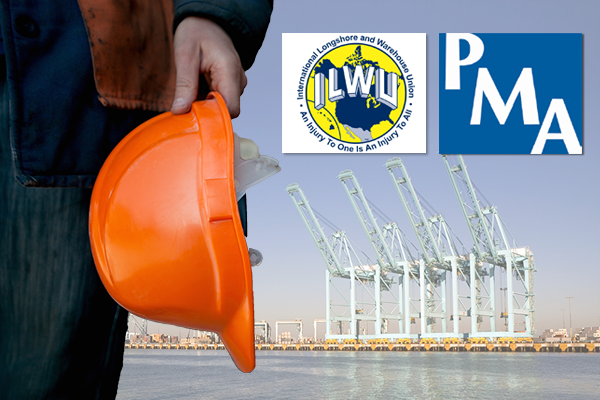 Why is there concern about possible disruption at U.S. West Coast ports?

Negotiations for new longshore labor agreements on the West Coast, indeed at ports generally, are when the risk of disruption is at its highest. West Coast longshoremen have in the past sought to apply pressure on management by striking or employing any of a number of slowdown tactics. No recent negotiation between the International Longshore and Warehouse Union and the Pacific Maritime Association, representing waterfront employers, has been free of disruption.

Disruptions normally take the form of sporadic work slowdowns, with no discernible pattern. However, the 2002 negotiations were characterized by a 10-day lockout of ILWU workers by employers, who were responding to what they believed to be illegal slowdowns.

In 2002, jawing began months before the two parties even sat down to negotiate. The biggest issue in those negotiations was the computerization of port operations, which impacted marine clerks as well as other port employees. By the end of the contract, on July 1, 2002, there was no agreement.

The PMA and ILWU continued to go back and forth at one another, both at the table and in the press, until the PMA locked out dockworkers for 10 days. President George W. Bush invoked the Taft-Hartley Act, ports went back into operation, and the negotiations continued until December 2002, when a new contract was signed.

Negotiations in 2008 were less eventful, but were bogged down by the then-controversial topic of automated cargo handling. Despite beginning early — the PMA and ILWU sat down at the table in mid-March 2008 — the negotiators missed the deadline yet again. Although this time there was no lockout, there were reports of slowdowns until a new pact was agreed to in August.

The negotiations to replace the current six-year collective bargaining agreement covering dockworkers at West Coast ports, which expired on July 1, involve less-controversial topics, but the threat of slowdowns still looms.

When is the risk of disruption the greatest?

The risk of disruption is greatest as negotiators get closer to the end of the current contract, which expires at midnight on June 30th, and in the days and weeks after if no agreement is reached by then, which is a distinct possibility. The ILWU is bound by a clause in its current contract barring strikes during the life of the contract, but slowdowns are harder to prevent, as the union can make an argument that it’s due to a health or safety issue. If no contract has been agreed to by the July 1 deadline — a result predicted by Pacific Maritime Association President James McKenna at the JOC’s TPM Conference in March - the parties may agree to extend the existing agreement into July, but there is no guarantee. 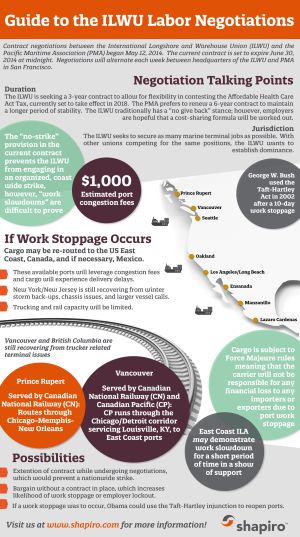 Is disruption a certainty?

It is likely there will be some disruption, but how much is very hard to predict. The ILWU is a famously democratic union where locals at the various ports will take matters into their own hands, engaging in job actions without the support of the union headquarters in San Francisco, if members feel the union’s leadership is compromising on issues they feel are important. However some groups and individuals are tamping down expectations for disruption. The National Industrial Transportation League told its members not to expect a strike or lockout but to anticipate picketing and even labor slowdowns. Given the national economic impact from a work stoppage, the White House would force the ports to reopen within a few days using a Taft-Hartley injunction, which President George W. Bush used to re-open the ports in 2002, former APL CEO Ron Widdows told the JOC’s TPM conference in March. However others see a quick Taft-Hartley injunction as less likely. Agriculture Transportation Coalition Executive Director Peter Friedmann said Obama would be hesitant to invoke Taft-Hartley, which is seen as an an-anti union tool, since he is a “close friend of organized labor.” When they began negotiations on May 12 the PMA and ILWU issued a joint statement that said “both sides said they expect cargo to keep moving until an agreement is reached.” PMA president James McKenna told the TPM conference that a contract will be reached without a strike or lockout, though the possibility for slowdowns or other forms of disruption remains.

What ports do the negotiations cover?

The negotiations cover 29 U.S. West Coast ports, including all the major West Coast container ports — Los Angeles, Long Beach, Oakland, Portland, Seattle and Tacoma. It does not cover ports in Canada or those on the U.S. East and Gulf coasts, the main reason why shippers are seeking refuge at those ports.

Are shippers diverting or accelerating cargo shipments to avoid the U.S. West Coast. What are shippers’ options?

Yes. Shippers are clearly diverting and accelerating shipments to avoid potential impact from the negotiations. They have options, but by late May time was running out given the necessary multi-week lead times on shipments from Asia. Shippers have moved up orders, asked customers to take on more inventory, and routed cargo through ports in Canada and the U.S. East and Gulf Coasts. Two-thirds of the 221 shippers that responded to a May 12-14 JOC survey said they had plans to divert and of those, 73 percent said they will ship through East or Gulf Coast ports, 25 percent said they would ship through Canadian ports and 2 percent through Mexico. Carriers say all-water services from Asia to the U.S. East Coast have been full, and freight rates out of Shanghai as tracked by the SCFI as of May 15 were up 5.2 percent to the East Coast versus the same date last year but were down 4.5 percent to the West Coast. A survey by the investment research firm Wolfe Research found much the same thing.

What will be the duration of the new West Coast longshore contract?

The six-year duration was introduced in 2002 following the 10-day shutdown and was repeated in 2008. Prior to that contracts had lasted three years. Shippers, carriers and other industry players prefer six-year agreements because they mean longer periods of labor peace. But the union is seeking a three-year contract this time. At the JOC’s TPM conference in March, PMA President James McKenna indicated that negotiators may decide to postpone the issue of who — dockworkers or employers — must pay for an estimated $150 million per year Obamacare tax on the union’s premium health care plan under which employers pay 100 percent of premiums in the ILWU health and dental care plan for members and their families, and union members pay just a $1 co-pay per prescription for medicine. Such “Cadillac” plans are subject to tax under Obamacare. Employers have indicated that a cost-sharing formula can be worked out, while the ILWU, in its traditional “no-give-back” strategy, does not want to pay any taxes on its health care plan. Since the tax takes effect in 2018, some have the idea that by then Congress will change Obamacare to eliminate the tax. If not, the union and employers can revive the issue then as part of a separate negotiation.

What are other potential flashpoints?

Jurisdiction is a big one. With union jobs in general in decline, unions are fighting it out among themselves over who will represent the remaining workers. The West Coast waterfront is no exception. At several terminals along the coast non-ILWU workers represented by unions like the International Association of Machinists and the International Brotherhood of Electrical Workers must co-exist with the ILWU, which would prefer to represent all workers inside marine terminals. But the ILWU is not necessarily in the best position to represent those workers. The spread of technology and automation threatens ILWU jurisdiction because maintaining the sophisticated cargo-handling equipment requires specialized skills that the mechanics and electricians unions encourage by putting their members through rigorous educational and apprenticeship programs. Last year the ILWU withdrew from the AFL-CIO, complaining that the umbrella labor organization was not supporting it in jurisdictional disputes with other unions. The ILWU still has bad memories of losing a jurisdictional battle in the early 1990s to unload ships at a steel plant in Northern California; if there is a core longshore function, it’s working ships, and that work is done by the Operating Engineers union.

How much do West Coast longshoremen earn?

ILWU workers receive a compensation package that is “among the most lucrative among all blue-collar workers in the United States,” according to the PMA. Full-time workers earn an average of $142,000 annually in wages, along with a non-wage benefits package costing more than $82,000 per active worker per year. Pay ranges depend on the job, with regular longshoremen earning less than clerks and both of them earning less than foremen. According to the 2013 Pacific Maritime Association Annual Report, most of the 9,985 “Class A” longshoremen working that year, which comprised those who worked 2,000 or more total hours, earned roughly $137,000 per year, though many earned less and a few of the highest paid longshoremen, those who worked an average of more than 50 hours per week, earned over $200,000. Most clerks earned roughly $147,000, while the highest-paid earned well over $200,000 per year. Walking bosses, or foremen, are the highest-paid ILWU workers, many of them earning well over $200,000 and some more than $300,000. Nearly 13,600 ILWU workers are employed at West Coast ports. In 2013, the total payroll for the nearly 13,600 ILWU members was roughly $1.4 billion. For detail on ILWU worker incomes, see this display.

Are wages expected to be a sticking point in the negotiations?

Probably not. Total longshore earnings, when overtime and skill-differential wages are included, are already among the highest in blue-collar America, so negotiators for both sides normally agree to modest annual hourly increases in the base wage.

What options do negotiators have for jurisdictional issues?

Jurisdiction can be tricky because the PMA as an employer group does not control 100 percent of the jbs on the waterfront. For example, the IBEW or IAM unions have contracts with individual employers that date back many years. Therefore the PMA can not arbitrarily give that jurisdiction to the ILWU. Jurisdictional issues can arise outside of the years when a contract is negotiated, such as when a terminal changes hands and the new owner has a contract with a different union. Appeals are then lodged through the established grievance procedures, or lawsuits may ensue. Jurisdictional issues are expected to intensify in coming years because automation eliminates some jobs but also creates new jobs calling for new skills.

How is automation being handled?

The 2002 contract gave employers the right to use computer technology, and the 2008 contract gave employers the right to introduce automated cargo-handling equipment. The ILWU normally uses the grievance machinery to challenge the new technology, but when the process runs its course, the employer is free to move forward with the technology. As a practical matter, the individual employers normally have many meetings with the ILWU locals and agree upon manning, use of the new equipment and related issues. The goal of employers is to achieve “buy-in” from the locals so that the expensive machinery is introduced smoothly, without work stoppages.

For complete coverage of the negotiations, visit the JOC’s ILWU Labor Negotiations page.

Permalink Submitted by edpiza@apexglobe.com on Jun 17, 2014 9:05AM EDT
Great recap. Want to share with my clients

thank you for the recap

Permalink Submitted by manychills@gmail.com on Jun 25, 2014 1:20PM EDT
thank you for the recap

you better look at your

Permalink Submitted by lakllr@aol.com on Jan 16, 2015 5:06PM EST
Excellent summary. A well written and comprehensive piece which informs without overwhelming.

How to Improve OTIF: 15 Tips for On Time and In Full Delivery
END_OF_DOCUMENT_TOKEN_TO_BE_REPLACED