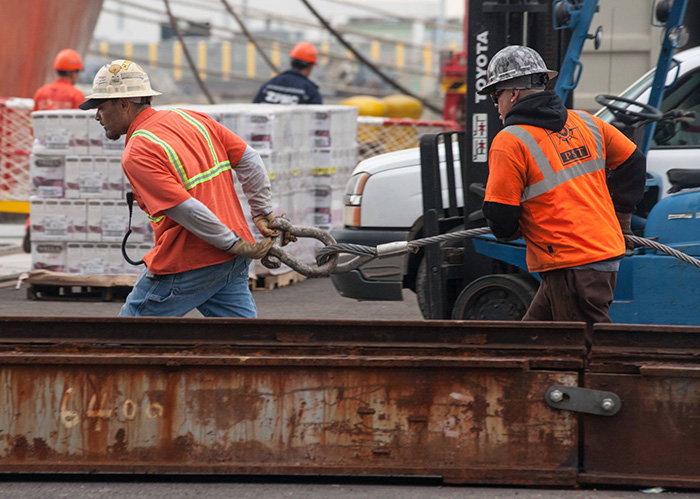 Protracted and difficult labor negotiations in late 2014 and early 2015 that resulted in costly congestion and delays on the U.S. West Coast has put labor relations at the top of shippers' minds.

Recognizing the importance of labor stability in the face of growing competition from Canadian and East Coast ports, the International Longshore and Warehouse Union will next month consider a vote on whether to extend the current coastwide contract.

The ILWU will call delegates to San Francisco Aug. 10 to 12 to consider the vote on launching early talks with West Coast employers to extend the current coastwide contract beyond its July 1, 2019, expiration date.

James McKenna, president of the Pacific Maritime Association, which represents shipping lines and terminal operators, said Thursday that if the ILWU delegates approve early discussions, the PMA and ILWU will most likely begin limited but focused talks in September. “It will probably involve a couple of items,” McKenna said.

The possibility of extending the agreement in order to provide beneficial cargo owners an environment of labor peace was first raised at the JOC’s TPM Conference in Long Beach on March 1. McKenna said he would send a formal letter requesting early negotiations to ILWU President Robert McEllrath, and McEllrath said he would present the request to his membership. The letter was sent to McEllrath later in the spring.

West Coast ports at the time were still recovering from a lengthy and bitter labor dispute that began on Oct. 31, 2014, and continued until a tentative agreement was reached by the ILWU and the PMA on Feb. 20, 2015. The port congestion and cargo diversion to East Coast and Canadian ports that resulted continued into May 2015. East and Gulf Coast and Canadian ports last year reported record container volumes while West Coast ports languished.

Competition for cargo has been an even hotter topic with the June 26 opening of the third set of locks on the Panama Canal, which will allow passage of mega-ships on all-water services from Asia to the East and Gulf coasts. Carriers immediately announced new services through the canal with vessels mostly with capacities of 8,000 to 10,000 twenty-foot-equivalent units, or about twice the size of the traditional Panamax vessels.

Also, the International Longshoremen’s Association and the United States Maritime Alliance on the East Coast on June 30 reaffirmed their commitment to continue their own discussions on an extension of their contract, which is scheduled to expire on Sept. 30, 2018.

Employers and longshore unions on both coasts are under pressure from organizations representing BCOs, who want a longer-term guarantee of labor peace so they can safely plan their supply chains into the future. During the West Coast disruptions, which involved ILWU work slowdowns and retaliation by employers, importers experienced missed shipment deadlines and exporters watched helplessly as their perishable agricultural exports rotted in the fields.

McKenna said that if early talks are held on a contract extension, they will not involve a complete renegotiation of the current contract, but rather would focus on a couple of basic issues such as wages and contract terms.

The ILA-USMX contract extension talks began with the ambitious goal of extending the existing agreement to 2025, but the two sides have since scaled back the anticipated length of a possible contract extension.

What's the definition of

Permalink Submitted by ferrullig@minds... on Jul 29, 2016 12:01PM EDT
What's the definition of "crazy"-doing the same thing over and over again and expecting different results? Last contract there were early discussions- how did that turn out? Now let's start early again and discuss "wages and contract terms". I know there is nothing in the contract about productivity, can I offer a suggestion that it be included at some point in time? Or are we content to have the highest paid people with one of the lowest productivity levels of any ports in the world?