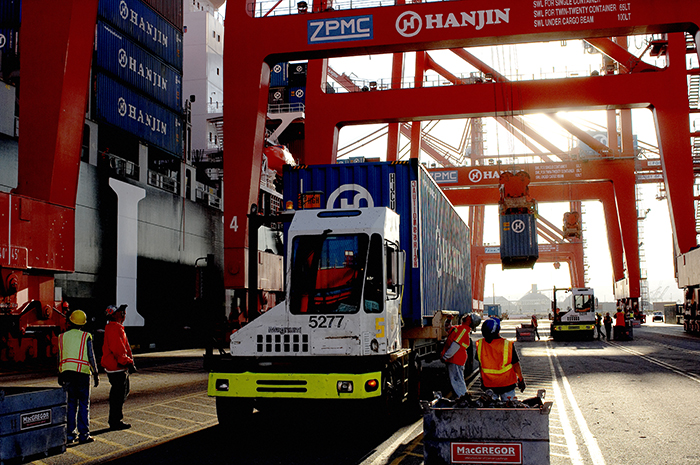 Dockworkers of the International Longshore and Warehouse Union, pictured at the Port of Long Beach, will meet this week in San Francisco to consider early contract talks, the acceptance of which would be a marked departure from historical precedent.

A historic International Longshore and Warehouse Union caucus that could solidify the role of the West Coast as the preferred and natural gateway for U.S. trade with Asia will convene Wednesday in San Francisco.

About 100 ILWU delegates will decide in the coming three days if the union will join the Pacific Maritime Association in early negotiations for an extension of the existing contract that is set to expire on July 1, 2019.

Highlighting the importance of the caucus, 128 organizations representing beneficial cargo owners and logistics providers urged the ILWU and PMA to consider a new bargaining model based on “early and continuous dialogue.” The coalition of manufacturers, farmers, agribusinesses, wholesalers, retailers, importers, exporters, distributors, transportation and logistics providers said early contract negotiations would avoid the disastrous labor problems and port congestion that accompanied the 2014 and 2015 coastwide negotiations on the West Coast.

“You have both recognized the negative economic impact of disruptions and slowdowns that occurred during the last negotiations. We believe starting negotiations early will help avoid a repeat of that experience,” the BCOs and other transportation groups stated in the letter.

The ILWU caucus is scheduled to run from Wednesday through Friday. ILWU spokesperson Craig Merrilees said delegates will discuss whether the union should join the PMA in launching contract extension talks, and will address “other issues” on the ILWU’s agenda. Jim McKenna, PMA president, said employers will “wait for their decision” and will not be involved in the internal ILWU caucus.

This week’s caucus is historic because the ILWU and PMA normally begin contract negotiations about two months before the existing contract expires. If they would begin contract extension talks more than two and one-half years before the 2015 agreement is set to expire, the ILWU and PMA would send a clear message to the BCO community that they intend to put past negotiating procedures behind them in order to make the West Coast the preferred gateway for U.S. trade with Asia.

Similarly, the International Longshoremen’s Association and United States Maritime Alliance on the East and Gulf coasts have had sporadic meetings the past two years with the goal of extending their contract long before the Sept. 30, 2018, expiration date. East Coast longshoremen benefited greatly from additional work opportunities through much of 2015 as BCOs diverted some shipments away from the West Coast.

In fact, the cargo diversions began even before the scheduled July 1, 2015, expiration date of the previous ILWU-PMA contract. As is normally the case in longshore contract negotiation years on both coasts, BCOs begin early in the year to test new routing options and to form business relationships with truckers, warehouses and other logistics providers on the opposite coast where they may not have established contacts. If the ILA and ILWU and their respective employer organizations succeed in extending the contracts, those predictable cargo diversions will be pushed further into the future

Nevertheless, labor and management must be careful to focus only on basic issues if early contract extension talks are to be successful. McKenna said West Coast employers suggest that the talks focus on wages and benefits. In other words, controversial issues involving automation or jurisdiction over chassis maintenance and repair could result in endless, contentious talks with no resolution.

Dave Adam, president of USMX, said East Coast employers “are looking at a simple extension of three years” that would focus on wages. In the last meeting several months ago, USMX presented its ideas to the ILA, and employers are waiting for the ILA response. With summer vacations still in progress, employers do not expect a response until fall, he said. Adam said Wednesday that the presentation was only the employers “conceptual thinking” about a new contract and that he misspoke when he originally described it as a proposal.

However, jurisdiction over chassis M&R continues to be a hot-button issue on the East Coast, and especially in New York-New Jersey. With terminal automation projects either underway or completed in New York-New Jersey and Virginia, that is also an important issue because longshoremen view M&R control as a way to preserve jobs lost to dockside automation.

West Coast ports, employers and longshoremen are still smarting from the loss of business and work opportunities in 2014 and 2015, so the ILWU and PMA appear to be motivated to regain lost market share. Competition with East and Gulf Coast ports further intensified on June 26 when the third set of locks on the Panama Canal opened to commercial traffic. Vessels with capacities of more than 13,000 twenty-foot-equivalent units can now transit the canal on all-water services from Asia. This takes away the significant advantage of scale that West Coast ports enjoyed when the canal was limited to vessels of up to 5,000-TEU capacity.

BCOs emphasized that their primary interest is an assurance of labor stability so they can plan their supply chains for the next five or six years. The letter to the PMA and ILWU therefore stressed that early contract extension talks should include a pledge by both parties to ensure there are no disruptions to cargo movement during the negotiations. The letter stated that a new model for contract negotiations would ensure that the arbitration mechanism remains in effect throughout the negotiations in order to prevent work slowdowns, strikes and employer lockouts.

“We fully believe that agreeing early to a contract extension or a new long-term contract will provide the stability and predictability that is needed for global competitiveness that will benefit all stakeholders (labor, terminal operators, cargo owners, etc.) who rely on West Coast ports,” the BCO letter stated.