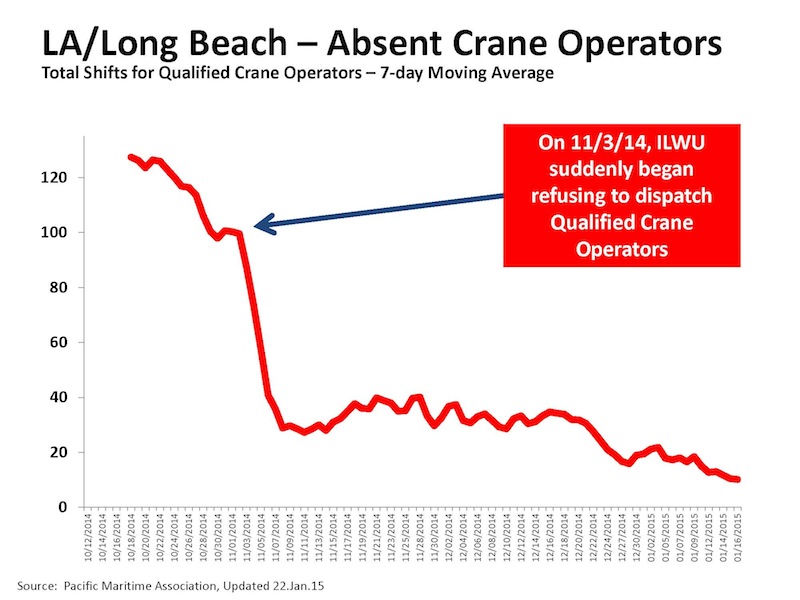 LONG BEACH, California — The Pacific Maritime Association on Friday released detailed accounts of the dramatic drop in longshore productivity at West Coast ports that began in late October and continues to contribute to stifling port congestion.

According to charts that track productivity from day-to-day since October, average International Longshore and Warehouse union crane productivity in Oakland, Seattle and Tacoma has plunged from 10 percent to as much as 39 percent from historical averages.

In Los Angeles-Long Beach, ILWU hard-timing of employers has taken the form of slashing the daily dispatch of skilled yard crane operators by two-thirds, resulting in nearly complete gridlock in the largest U.S. port complex.

The PMA said the ILWU is orchestrating these go-slow tactics to gain leverage in the coastwide contract negotiations that started last May and have been held under the auspices of the Federal Mediation and Conciliation Service since Jan. 6.

ILWU spokesman Craig Merrilees said port congestion is the result of operating decisions the carriers themselves have made that have caused productivity to deteriorate, “making the docks a more dangerous and difficult place to work.” The ILWU often bases decisions, such as the reduction in the dispatch of skilled labor, on health and safety claims.

Longshoremen in Oakland traditionally have had the highest crane productivity on the coast. For October, container moves per crane, per hour, averaged 32.1, spiking on some days to 36 moves per hour. The PMA numbers show that Oakland’s decline in productivity has been more gradual than elsewhere on the coast, averaging 27.2 moves per hour in December and 23.9 in January.

Employers sometimes refer to Oakland as a “one-shift wonder” because vessels can be worked in one shift. Given the standard vessel deployment in Pacific Southwest services, vessels call only two ports, Los Angeles-Long Beach inbound and Oakland outbound. Due to Southern California’s large local market and extensive intermodal rail connections to the eastern half of the country, more than 80 percent of the containers on the vessel are discharged and reloaded in Los Angeles-Long Beach, leaving only about 1,500 container moves for Oakland.

Because crane operators are allowed to go home after the vessel work is done, the productivity-minded crane operators often discharge and reload the containers for Oakland in less than eight hours, employers say.

The ILWU is crippling the ports of Los Angeles and Long Beach, the PMA said, by refusing to dispatch sufficient skilled crane operators in the container yards. Those longshoremen transfer containers from the stacks to truckers, and are therefore crucial to keeping containers from backing up on the docks.

PMA spokesman Steve Getzug said that from 1999 to Nov. 3, 2014, the ILWU hall in Southern California consistently dispatched at least 110 yard crane operators each day. Beginning Nov. 3, the hall dispatched only 35, citing safety concerns. The daily dispatch has actually been trending downward from that number, according to the PMA data.

Container terminals in Southern California are overwhelmed by congestion. Gene Seroka, executive director of the Port of Los Angeles, told the annual conference of the California Trucking Association last weekend that the terminals were utilizing 95 to 97 percent of their available land. After utilization reaches 80 percent, productivity deteriorates, terminal operators say.

Employers last week responded to that situation by suspending vessel operations at night, although yard and gate work continued. The PMA said its goal was to clean as many containers from the yards at night so space would be available the next morning to resume vessel unloading.

The employers’ decision has led to even greater congestion on the docks, the ILWU said, and employers are compromising the safety of the workers. “A graph showing how employer shift reductions are delaying container deliveries might be more interesting,” Merrilees said.

The ILWU, meanwhile, has attracted renewed support from the International Longshoremen’s Association on the East Coast. “The ILA stands fully behind the ILWU as it seeks to negotiate a fair and strong contract for its members,” ILA President Harold Daggett said on Friday.

It is no secret that cargo interests have diverted a good deal of discretionary cargo away from the West Coast to Canadian Pacific Coast ports and U.S. East and Gulf Coast ports since last summer. More recently, several lines ran “extra loaders” from Asia to the East Coast. Those are one-off sailings in addition to the regular weekly services through the Suez and Panama canals.

The industry, Daggett said, is flirting with danger. “We will closely monitor any attempts by shippers to try and divert cargo to ILA ports,” he said. “This tactic by employers will not be successful. We are one and will support our ILWU sisters and brothers.”

West Coast employers are equally as vociferous in drawing attention to the significant costs and delays cargo interests are suffering because of the work slowdowns. “As outrageous as these slowdowns have been since Oct. 31 — crippling the West Coast ports and creating worry and economic harm — is the union’s continuing refusal to acknowledge that they are even occurring,” Getzug said on Friday.

“Slowdowns are part of the ILWU’s negotiating playbook to leverage their own self-interests,” he said, “and they are happening at the expense of businesses and people who rely on timely cargo deliveries to make a living, as well as the future success of the West Coast ports.”

The PMA locks out the ILWU