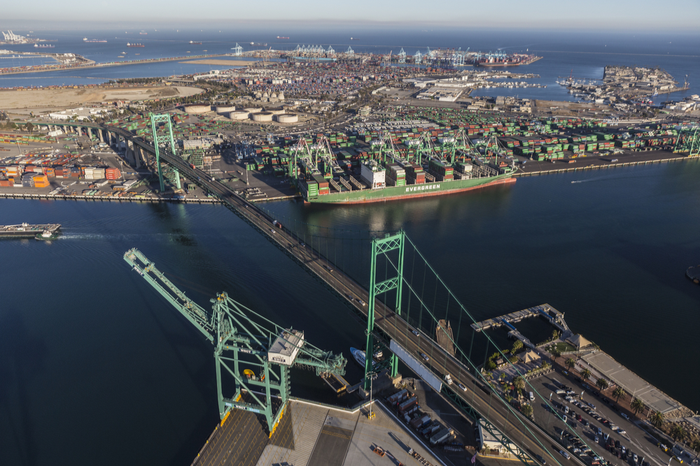 With a deal reached on training, APM Terminals’ request for a construction permit needed to install electrical recharging equipment at Pier 400 in Los Angeles can move forward to the final stage of approval. Photo credit: Shutterstock.com.

International Longshore and Warehouse Union (ILWU) Local 13 and APM Terminals reached a tentative agreement Wednesday on a training program that will prepare longshore mechanics to maintain and repair the automated cargo-handling equipment the terminal operator will deploy at its Los Angeles facility.

The six-month-long negotiations between the Southern California local and APM Terminals involving a new form of automation in North America appears to have been resolved amicably, with the ILWU achieving its goal of establishing a program to re-skill and up-skill longshore workers to maintain and repair automated cargo-handling equipment. In the coming month, APM will deploy the equipment on a 100-acre parcel of its container terminal when it arrives in Los Angeles.

“We’re excited about the opportunity to up-skill our longshore workers for the equipment that will soon be arriving here,” Ray Familathe, president of ILWU Local 13, told JOC.com Thursday.

APM Terminals said dockworker training is crucial to the future of the port and the industry. “We believe that it is critical to the continued success of the Port of Los Angeles that the ILWU is trained for the jobs of the future. As we prepare to modernize Pier 400, we are glad to be working in partnership with the ILWU and PMA [Pacific Maritime Association] on implementing a training program that complements the changes at Pier 400, and in the broader industry,” APM said in a statement.

APM Terminals’ request for the construction permit that is needed to install electrical recharging equipment for the automated straddle carriers it will deploy at Pier 400 can now move forward to the final stage of the approval process before the Los Angeles City Council. If the council takes no action by Aug. 7, the agreement will become final on the next day, and the construction permit will be issued.

The fact that it took six months to approve what would normally have been considered a low-level construction permit illustrates the passionate give-and-take that is under way today between labor and management at North American ports over automation. On one hand, automation eliminates dozens of traditional longshore jobs, but also creates new, highly skilled, high-paying jobs for dockworkers. Longshore unions in the United States and Canada insist that they have jurisdiction over those jobs, and their members are trained to perform the work.

APM intends to deploy driverless, battery-powered auto-strads at Pier 400. Dozens of existing jobs in which longshore workers drive diesel-powered yard tractors to shuttle containers between the vessel and the container stacks will be eliminated. However, under the agreement, longshore workers who have been trained in the maintenance and repair (M&R) of diesel equipment will be re-trained for M&R work on zero-emission electrical equipment. This training will become even more valuable in the coming years under the Los Angeles-Long Beach Clean Air Action Plan, which calls for the use of zero-emission cargo-handling equipment by 2030.

James McKenna, president of the PMA, the employers’ organization that negotiates and administers the coastwide contract with the ILWU, said the training program has two parts. One part calls for re-skilling regular longshore workers who want to become mechanics. Another part of the program will up-skill existing ILWU mechanics to perform M&R work on the jobs being created by automation, such as repairing and maintaining electric and battery-powered cargo-handling equipment.

The training program in Southern California is terminal-specific. While it might become a model upon which similar training programs could be established, McKenna observed, “As a practical matter, let’s get this one up and running first.”

Gene Seroka, executive director of  the Port of Los Angeles, said the tentative agreement will benefit labor, APM and the port. “If finalized, this  would be a major step forward in securing the future of work at the port complex for years to come,” he said.

Last month, ILWU Canada and the British Columbia Maritime Employers Association (BCMEA) agreed on a new contract that took more than a year to negotiate. It was resolved when employers and the union agreed on a structure for handling automation at the ports of Vancouver and Prince Rupert. On the US East and Gulf coasts, where three semi-automated terminals operate, the International Longshoremen’s Association strenuously opposes full automation.

Very noble of them.

What does this really do for

Permalink Submitted by david.nes.165@g... on Jul 19, 2019 1:56PM EDT
What does this really do for those who don't meet Pma's skills factor/ where do all of the others get located ! Where do they go ?
Port News›Longshoreman Labor
North America›United States