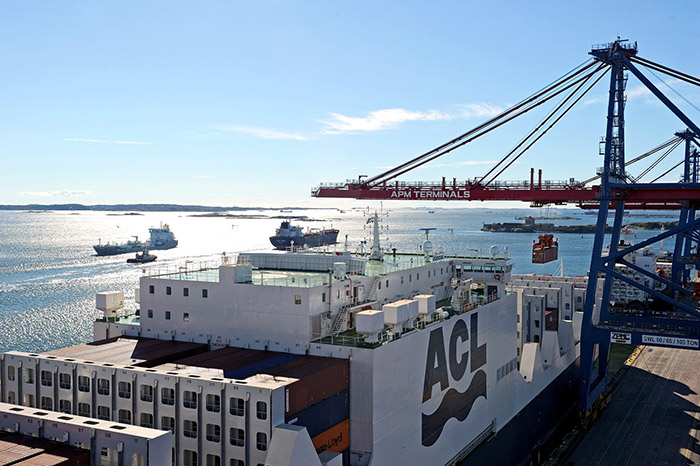 Gothenburg dockworkers will vote next week whether to go ahead with industrial action against APM Terminals after the company announced a six-week lockout at Scandinavia’s largest container hub.

The vote will come just after Atlantic Container Line, a customer since the 1960s, told JOC.com that it might be forced to quit Gothenburg owing to plunging productivity that has cost it an average 20 hours per vessel call this year.

The lockout applies to evening and night shift work from May 19 and was in response to the decision by the local branch of the Swedish Dockworkers Union (SDU) to reinstate bans on overtime and the hiring of pool workers for daytime shifts and the operation of straddle carriers.

The chance of striking an agreement with APM Terminals before next Wednesday’s vote is “slim to none,” Robert Lindelof, an SDU official told JOC.com.

“It’s hard to say what will be the result, but my own guess is we can’t withdraw [from industrial action].”

“We won’t cave in to APM Terminals,” Lindelof said.

The year-long dispute, which has involved blockades, strikes, and overtime bans, centers on the SDU Gothenburg’s demand for a collective bargaining agreement separate from one that applies across the rest of the Swedish waterfront.

Lindelof said an intensification of the conflict will have “crucial “consequences for the port, which handles more than half of Sweden’s export and import container traffic.

Maersk Line and its Safmarine subsidiary stopped accepting bookings for Gothenburg on May 10, prompting further diversions to neighboring ports that have disrupted Swedish exporters’ supply chains.

APM Terminals says it has suffered a 20 percent decline in productivity in the past six months, equivalent to around 2,000 containers a week, due to the actions of the SDU.

Maersk’s port arm, which gave the SDU a week to strike an agreement, says it has no demands beyond striking a collective bargaining deal that does not violate the national agreement established at all other Swedish ports.

The union has no problems with Gothenburg’s two other terminals, which have seen roll-on, roll-off and trailer traffic “skyrocketing.”

The SDU represents around 85 percent of APM Terminals staff, around 250 workers, and 96 to 97 percent of dockers at the port’s two other terminals.