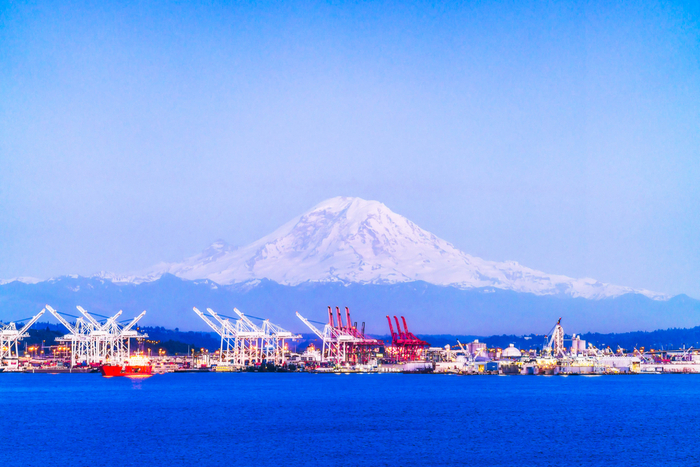 The ILWU on Monday dispatched about 200 longshore workers to Seattle’s Terminal 18 for the night shift, but the dockworkers refused to enter the gate until the office was sanitized. Photo credit: Shutterstock.com.

An incident in Seattle this week in which longshore workers refused to work after an office worker who later tested positive for the coronavirus disease 2019 (COVID-19) went home sick underscores the need to report all illnesses through a joint employer-union portal to avoid further work disruptions, the head of the Pacific Maritime Association (PMA) said.

“We know we’re not doctors, and it takes time for test results to come back,” PMA president James McKenna said.

McKenna told JOC.com Wednesday the incident highlights the importance for employers and the International Longshore and Warehouse Union (ILWU) to report all illnesses — even those involving family members — immediately through the joint ILWU-PMA information portal so appropriate action can be taken.

That word of caution comes after the ILWU on Monday dispatched about 200 longshore workers from its Seattle dispatch hall to the Port of Seattle’s Terminal 18 for the night shift, but the dockworkers refused to enter the gate until the office was sanitized, citing knowledge of the office worker’s illness.

The employee of terminal operator SSA Marine went home early last Thursday with a slight fever and remained home on Friday. The worker’s condition worsened over the weekend, and the individual was tested on Sunday for coronavirus disease 2019 (COVID-19). The employee tested positive for COVID-19 on Wednesday.

Edward DeNike, CEO of SSA Containers, told JOC.com Wednesday that even though the union knew the office worker’s condition had worsened over the weekend, they still chose to dispatch the longshore workers to Terminal 18. DeNike said when the sanitization process was completed on Monday night, the longshore workers agreed to return to work on Tuesday.

According to DeNike, under the waterfront labor contract, SSA was only responsible for paying for four hours for longshore workers who were dispatched from the ILWU hall but couldn’t work because of such an incident. However, SSA agreed to pay the longshore workers for the full shift, at a cost of about $200,000, he said. The workers have since returned to the job.

An ILWU spokesperson told JOC.com Wednesday the union had no comment at this time.