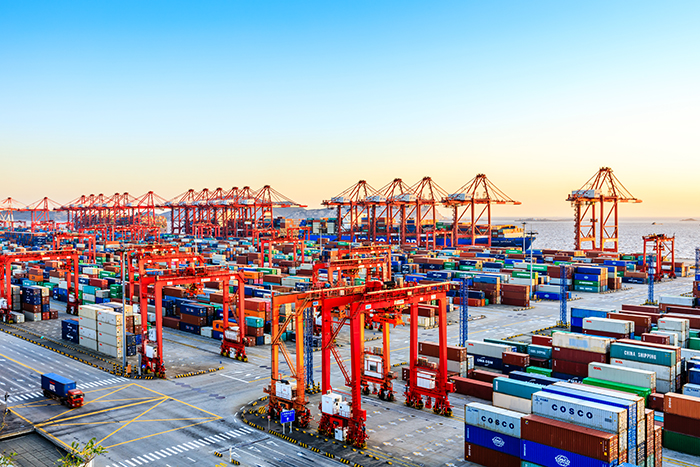 Continued growth in global trade volumes in 2019 pushed the total container throughput of the 50 busiest cargo ports in the world up 3.5 percent year over year to more than half a billion TEU, according to the JOC Top 50 Global Container Ports 2019 rankings.

On a regional level, ports in Asia — including the Middle East and Indian subcontinent — continued to increase their already dominant share of the global market, accounting for nearly 79.3 percent of the combined 517 million TEU handled by the top 50 container ports last year, up from just shy of 78 percent in 2018. By comparison, European and North American ports represented 12.7 percent and 6.4 percent of the total, respectively.

The Port of Shanghai maintained its top spot on the list, reporting a 3.1 percent increase in container volume to 43.3 million TEU, more than four times the 9.7 million TEU handled by the busiest North American port, Los Angeles.

Thanks to an acceleration in sourcing shifts toward Southeast Asia and away from China spurred in part by the US-China trade war, Vietnam's Port of Ho Chi Minh City reported the highest growth rate of any port in the top 50 by a wide margin, increasing throughput 72.5 percent to 10.9 million TEU for the year and surging 13 spots to move into 15th place in the process. Volume growth at the Mediterranean hub port of Tangier, Morocco, also vastly outpaced the market, albeit from a slightly smaller base, with container throughput rising 38.4 percent to 4.8 million TEU.

The Port of Rotterdam, the largest non-Asian container gateway, was able to crack the top 10 thanks in part to a 2.1 percent increase in container throughput to 14.8 million TEU.

Only 12 of the top 50 ports showed negative growth from 2017. The flagging Port of Hong Kong, which held the distinction of the world’s busiest container port until it was dethroned by Singapore in 2004, continued to slide down the list, dropping one spot to No. 8 as its throughput dipped 6.3 percent to 18.4 million TEU. The largest declines, however, took place at Yingkou, China, which saw throughput drop 15.8 percent to just under 5.5 million TEU, and Tanjung Priok, Indonesia, down 12.7 percent to 6.8 million TEU.

Global Shipping Outlook: A Sneak Peek at 2021
Port Performance North America: Managing Cargo Flow During a Pandemic — and Beyond
END_OF_DOCUMENT_TOKEN_TO_BE_REPLACED