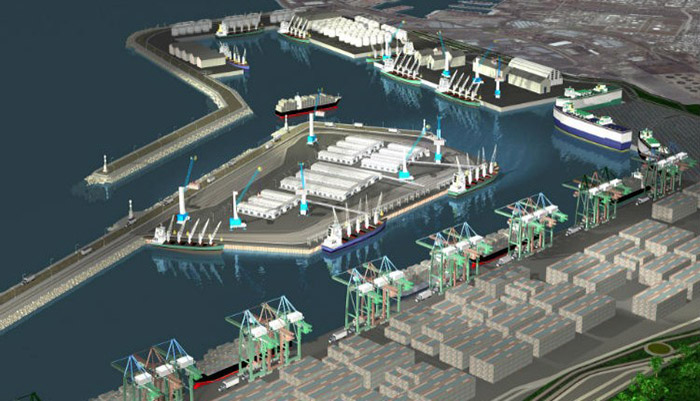 An artist's rendering of the Port of Veracruz following the completion of its enormous capacity upgrades.

Mexico is surging ahead with the dramatic expansion of the Port of Veracruz in preparation for the trade increase expected from the country’s growing manufacturing base, especially car makers.

The Mexican government, as part of its project to build a new facility next to the existing Gulf of Mexico port, will hear presentations next week from bidders looking to build a nearly 1,000-foot long section of quay.

The government is also seeking bids for five new terminals — including one for containers, and others for farm and mineral bulk goods. Mexican authorities say they expect to begin dredging in December, a schedule that should make the first berth ready for operation by the spring of 2018.

Last week, the head of the Mexican Ports and Merchant Marine department, reiterating his commitment to the project, outlined a vision of a “world class logistical center” that would meet the needs of shippers for the next century.

“We at ports have to go forward” and be ready for the maritime demands in the future, Guillermo Ruiz de Teresa, general coordinator of the ports and merchant marine department, said in a release.

The Veracruz project would increase the volume of cargo handled at the port from 260 million tons to 520 million tons by the end of 2018. The port plans to expand its container capacity from roughly 900,000 twenty-foot-equivalent units to 5 million TEUs by 2030.

About 80 percent of the $1.7 billion to be spent on the project by 2018 will be paid by private investors, Ruiz de Teresa said. Investments totaling another $1.6 billion will be made by 2024, Mexican authorities say. Businesses are willing to put their money behind the port, Ruiz de Teresa said, because they “believe in policies that are implemented in this country, believe in Mexico, and see a promising future in the ports.”

By the time the expansion is finished, he added, Veracruz — which was first established as a port more than 400 years ago — will be bigger than the Pacific Coast ports of Manzanillo and Lazaro Cardenas combined.

Veracruz is Mexico’s third-largest port in 2015, and ranked 17th in all of North America on JOC’s Top 25 North American Container Ports. It handled about the same volume of containers as Lazaro Cardenas, which was ranked 16th, and far less than the largest Mexican port, Manzanillo, which handled two-and-a-half times as many containers that year, and was ranked ninth globally.

Veracruz handled 709,023 TEUs from January to September of this year, a 1.4 percent increase over the same period in 2015. That accounted for about 17 percent of all the containers handled in Mexico over the period. The port was the largest importer and exporter of cars among Mexico’s ports, moving 558,882 vehicles in the first nine months of 2016, government figures show. That volume accounted for over 60 percent of all cars imported or exported nationwide.

Pablo Flores, manager of Maersk Line in Mexico and Central America, said the expansion should fix a fundamental concern with the current port: its proximity to the center of Veracruz.

“The challenge with Veracruz is that the terminal is in the middle of the city, so anything and everything that goes and comes from the port, it has to go through the city, which leads to a congested city, congested roads in and out of the terminal itself — and it has no room to expand,” he said.

The new port, with a rail link that will bypass the city entirely, has plenty of space for expansion and will provide a natural gateway for cargo that is bound for, or leaving the country from, central Mexico, he said.

Behind the expansion is the Mexican government’s pledge in April 2015 to invest $5 billion in its network of 117 ports. The move stemmed in large part from the rapid growth of Mexico’s manufacturing sector, with more than a dozen auto plants dotted around the country, including Ford, Chrysler, Fiat, and General Motors plants around Mexico City. Also important is the country’s liberalized energy sector policy, which is expected to increase the volume of oil flowing through the ports, especially those in the Gulf.

Veracruz and the port of Altamira were until recently the best-placed Gulf ports to serve the vast Mexico City market as well as the manufacturing hubs around it in Central Mexico. But in July, the new port of Tuxpan opened. Tuxpan is closer to Mexico City and is connected to Mexico City by a new highway.

The existing Veracruz port, covering 585 acres of water and 900 acres of land, has 18 docks that range between 26 feet and 43 feet deep, limiting the use of post Panamax and above ships. The expansion project involves building an entirely new port slightly to the north of the existing one, with the new quay sheltered by two long breakwaters.

The first phase of the expansion will focus on container capacity and is scheduled to be completed by 2018. It involves building the 2.6 mile Seawall West breakwater and dredging about 989 million cubic feet of material. A 1.7-mile quay will accommodate eight berths dredged up to 59 feet. By the time the $2 billion second phase is completed, the port will have 53 docks, be nearly 60 feet deep in parts, and cover 1,200 acres of water and 1,000 acres of land. Together, the expansion will be more than two-and-a-half times the size of the existing port.

Walter Kemmsies, an economist and managing director at Jones Lang LaSalle, who is well versed in Mexican port issues, said that although the Pacific coast Mexican ports have boomed with the heavy volume of trans-Pacific trade, the Gulf ports have lagged, owing to the “bottleneck” of the Panama Canal. Now that the canal has been expanded, permitting larger ships to come through, Veracruz could get more traffic from larger ships starting in Asia and heading to Europe and then South Asia, he said.

The canal’s expansion is one of several developments that could combine to bring Veracruz new business, Kemmsies said. The growing Gulf Coast population, from Mexico to the coast of Florida, now totals about 25 million people, and is an attractive market in its own right, he said.

Meanwhile, upgrades at other Gulf ports, including Houston and New Orleans, could create a “network” of deep, efficient, and well equipped ports that together could stoke interest in Gulf routes from shipping lines, he said. He cited the example of a new Maersk route announced in March, linking China with Houston, Mobile, Alabama, and Miami through the Panama Canal, though it does not stop at Veracruz.

“I think the time really is right for them to engage in a major expansion and operation,” he said, of Veracruz. “This is the time to put the pedal to the metal.”