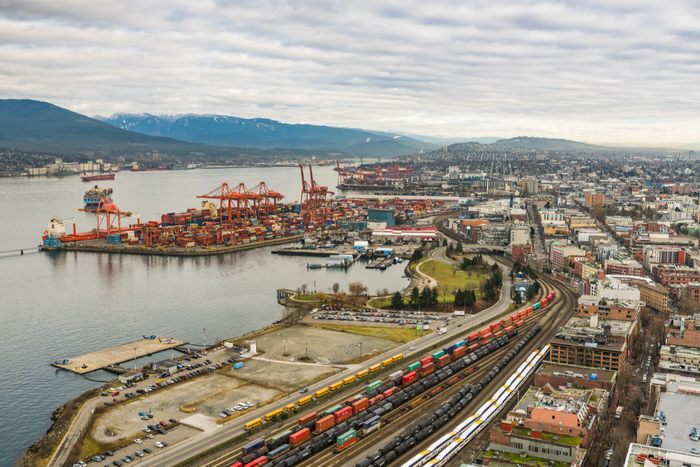 Rail container dwell times at the Port of Vancouver, which had consistently been 3.2 days or lower since last April, shot up to five days or longer over the past week. Photo credit: Shutterstock.com.

Vessel operations in the Western Canadian ports of Vancouver and Prince Rupert Monday were dealing with the effects of bad weather and protests by indigenous tribes that caused congestion and excessive container dwell times over the past week.

Protests by Canada’s First Nations tribes continued to block traffic on Canadian National Railway’s main lines in British Columbia and Ontario. The protests, which blocked truck traffic from accessing terminals in Vancouver and disrupted rail operations at the ports and at other points along the rail networks, were called to express the First Nations’ disapproval over proposed pipeline projects in Western Canada.

“Nearly 200 trains have now been directly impacted since the blockades began,” CN spokesman Jonathan Abecassis said Monday. There are currently no CN train movements at protest locations in Ontario and British Columbia. “Our double-tracked mainline has been shut down for five days since approximately 5 p.m. local time on Thursday,” he said.

Canadian Pacific Railway, which also serves Vancouver’s terminals, has not been as seriously affected by weather events. CP’s rail container dwell times at the Deltaport terminal on Friday were five to seven days but were five days or less at Vanterm and Centerm, according to the port’s website.

The congestion at Vancouver and Prince Rupert was compounded by late vessel arrivals last week, the final shipments from factories in Asia before they shut down for the Lunar New Year celebrations, according to a Maersk Line advisory. Vessel bunching and congestion in Prince Rupert caused the diversion of a Maersk vessel to Vancouver, with the Maersk Shanghai sent there due to “100 percent yard utilization” in Prince Rupert, Maersk said.

One of the protests in Vancouver also interfered with truck traffic throughout the weekend. According to a statement from Global Terminals, police on Monday enforced an injunction granted on behalf of the BC Maritime Employers Association and Vancouver Fraser Port Authority by removing protestors and barricades that had blocked the marine terminal workforce from accessing the facility. A trucking industry spokesperson said truck traffic resumed at 8:30 a.m. on Monday and was expected to return to normal soon.

Global Shipping Outlook: A Sneak Peek at 2021
Port Performance North America: Managing Cargo Flow During a Pandemic — and Beyond
END_OF_DOCUMENT_TOKEN_TO_BE_REPLACED