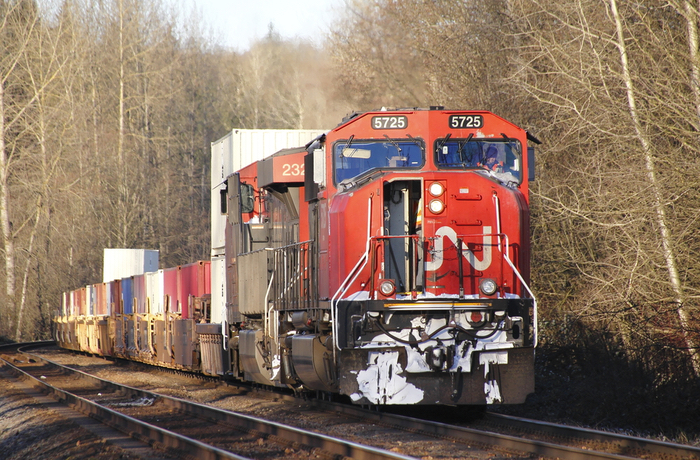 CN said Saturday the illegal blockage of tracks at Tyendinaga, Ontario, continues because court orders have yet to be enforced. Photo credit: Shutterstock.com.

Canadian National Railway intermodal rail service serving the Port of Prince Rupert in British Columbia is continuing without interruption after resuming late last week, according to port officials. But ongoing protests are affecting rail operations connecting to the ports of Montreal and Halifax.

A rail blockade in Ontario as part of a two week-long First Nation protest against a proposed oil pipeline in Canada remains in place, and CN’s eastern network is “more or less shut down,” with limited trains operating in the Halifax/Montreal corridor, Hapag-Lloyd told customers in a Tuesday advisory. The carrier said it was exploring options to divert cargo out of Halifax.

Canadian business groups, including the Freight Management Association of Canada (FMAC), which represents cargo owners, sent a letter to Prime Minister Justin Trudeau on Tuesday urging him to end the blockades. “In addition to disrupting domestic and global supply chains, the blockades undermine Canada’s reputation as a dependable partner in international trade,” more than 30 business groups told Trudeau in the letter.

After canceling his planned Caribbean trip to make the case for Canada to get a seat on the United Nations Security Council, Trudeau on Tuesday urged patience and dialogue in seeking a peaceful accord.

In a separate letter, major freight groups — the Association of Canadian Port Authorities, the Canadian International Freight Forwarders Association, FMAC, and the Shipping Federation of Canada — urged Minister of Transport Marc Garneau and the government to do “everything in its power to find a long-term resolution to this issue.” The groups said in the Feb. 14 letter they were particularly worried about the impacts of the blockade on CN’s mainline in Belleville, Ontario, connecting not just eastern and western Canada, but eastern Canada with the US Midwest.

While CN said it has successfully sought a court order to end a blockade in Vancouver and two in Vaughan, Ontario, the railroad said Saturday the illegal blockage of CN tracks at Tyendinaga, Ontario, continues because court orders have yet to be enforced. CN said the shutdown of its eastern Canadian network would continue until the blockades end.