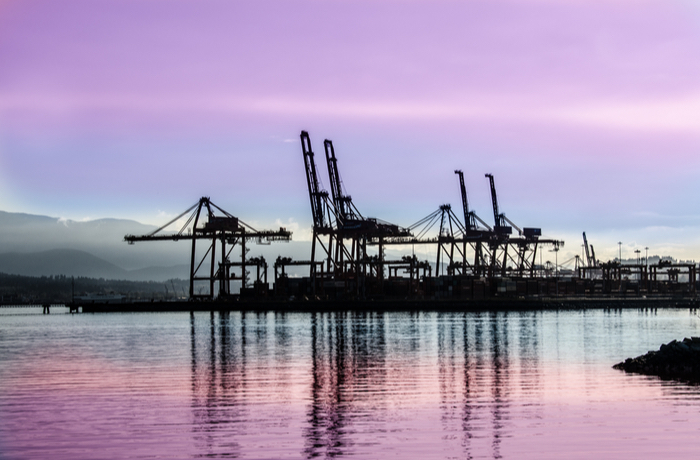 When exactly the capacity crunch hits Vancouver depends on cargo volume growth in the coming years and whether medium-sized expansion projects on the Canadian West Coast keep to their timelines. Photo credit: Shutterstock.com.

The Canadian government’s release of an environmental review of a proposed new marine container terminal in Vancouver puts the port authority one step closer to realizing a nearly two-decade vision. But a federal court review will determine whether a competing vision from its largest tenant gets back on track.

Canada’s minister of environment and climate change, Jonathan Wilkinson, has nearly a year to make a decision on whether to allow construction to begin on the planned terminal, known as Roberts Bank 2 (RBT2). The minister can stop the clock for a variety of reasons, including asking further questions as he weighs the port authority’s effort to mitigate the environmental impact, amid concerns the terminal could hurt endangered killer whales and other wildlife.

Additionally, because of the project's anticipated environmentl and community impact the plan will also be reviewed by the Cabinet of Canada.

If the Canadian federal government agrees the project should go forward, the Vancouver Fraser Port Authority will begin construction on the 2.4 million TEU marine terminal in 2022 and bring it online by 2028. The project will cost some $3 billion, according to the environmental review.

But GCT Canada, the port’s largest tenant and operator of two Vancouver facilities, argues the terminal project is too costly and the port would be more competitive if it expands GCT’s own Deltaport facility by adding 2 million TEU in capacity at a cost of more than $1 billion.

After the port authority blocked the Deltaport expansion proposal in March 2019, GCT Canada asked for a federal judicial review of the decision, arguing it can’t receive a fair review of its project when the port authority is advancing its own greenfield terminal plan. GCT said it expects the review to be released later this year.

While the two sides disagree on the best way to add some 2 million TEU in capacity, they agree Vancouver risks a scenario in which marine terminals will be clogged within approximately 10 years. When exactly the capacity crunch hits will depend on cargo volume growth in the coming years and whether medium-sized expansion projects on the Canadian West Coast keep to their timelines.

Whether in eight or 12 years, when port-wide marine terminal utilization on average nears the so-called red line of 85 percent, congestion will build, and the port will find it even more challenging to recover from surges of cargo and poor weather. The port’s average utilization last year was 75 percent, according to the Vancouver Fraser Port Authority.

The stakes are high for the port community and Canada’s economy. Congested marine terminals would mean higher shipping costs for importers and exporters unable to serve their markets through other ports. Canadian cargo owners with routing options and US shippers would divert cargo away from Vancouver, which handles approximately half of the containerized trade that moves through the country’s top four ports.

“As we look at the growth rates, the capacity options on the coast and the need for capacity, we're already on the critical path on that timeline,” Silvester said. “And even with every other piece of capacity that is permitted being built, by the mid- to late-2020s, Canada needs more West Coast capacity and there is no other project in permitting that can deliver that capacity.”

In rejecting their proposal in March 2019, the port authority told GCT the project wasn’t feasible from an environmental standpoint and that allowing its largest tenant to expand its control would hamper competition. The port authority didn’t detail the threshold it considered necessary to keep marine terminal competitive.

GCT counters while its share is 69 percent, more importantly, it says it only controls 51 percent of the total capacity on the Canadian West Coast when considering Prince Rupert, and it competes for cargo across the coast, not just in Vancouver.

On environmental concerns, GCT said the port authority is using a 16-year-old letter from the Department of Fisheries and Ocean Canada that a GCT land reclamation project isn’t feasible. GCT says the regulatory regime has changed significantly since then and that its project is materially different than the one considered in 2003. In March 2019, the department said during a review panel that the 2003 letter wasn’t a blanket statement and it would review the project if it received such a request.

In its environmental assessment released Friday, the Impact Assessment Agency of Canada said that “it has reason to believe that, although the regulatory context had changed since 2003, the potential for environmental effects on critical fish habitat in the intertidal area had not changed, and the destruction of that critical habitat would potentially not be permitted by” the Department of Fisheries and Ocean.

GCT argues that having an extended berth via its planned expansion, rather than a new berth at a new terminal, will allow the port to better handle the larger ships plied by three major shipping alliances because carriers need fewer but larger terminals at ports of call.

Given the need for more capacity on the British Columbia coasts, the Deltaport expansion “is the only project that is nimble enough to do this — it is incremental, privately funded, and environmentally less damaging,” Doron Grosman, president and CEO of GCT, told JOC.com.

“Going forward with the Port Authority-funded RBT2 megaproject that brings on unneeded capacity at extreme cost could negatively alter the competitiveness of the entire Gateway,” he said.

Considering the price tag for RBT2, GCT questions how a terminal operator would be able to make the cost of return and remain competitive, particularly for US-origin and US-bound cargo — which makes up about a third of the Canadian West Coast’s volume — unless government subsidies were provided. On hampering competition, GCT says that hypothetical attempts to gauge the market by raising tariffs on container lines would end up costing them business to Vancouver’s other terminal operator, DP World, or to other ports. In the meantime, GCT Canada said it’s continuing to engage with environmental interests and other stakeholders needed for its project to proceed.

“The idea that we're a competitor is rubbish,” Silvester said. “What we are trying to do with Terminal 2 is exactly what we did to create the business at Deltaport. We as the port authority are the proponent to create land and then we will be leasing [that land] to a terminal operator.”

Citing the C$200 million in technical work spent to advance the project, he said the port authority was “very confident in the work we have done to determine what the best way to deliver capacity to the coast is.”

GCT strongly disagrees. “It is not possible to be a landlord, a regulator, and, with the development of RBT2, a competitor,” Grossman said, noting the government is taking a closer look at the governance of port authorities, which was announced at GCT Deltaport by Transport Canada Minister Marc Garneau in May 2018.

“GCT has been a terminal operator for over 100 years. We understand the business, the economics, and the landscape,” Grosman said. “It is indefensible that a better, more fiscally and environmentally responsible alternative, has not been considered.”

Transport Canada’s review of the 20-year-old port authority system was completed in December 2018, but the agency said it’s still analyzing the finding and review lessons that will come out of disruption caused by coronavirus disease 2019 (COVID-19). Transport Canada was not able to provide a timeline when the major findings of the review would be made public.