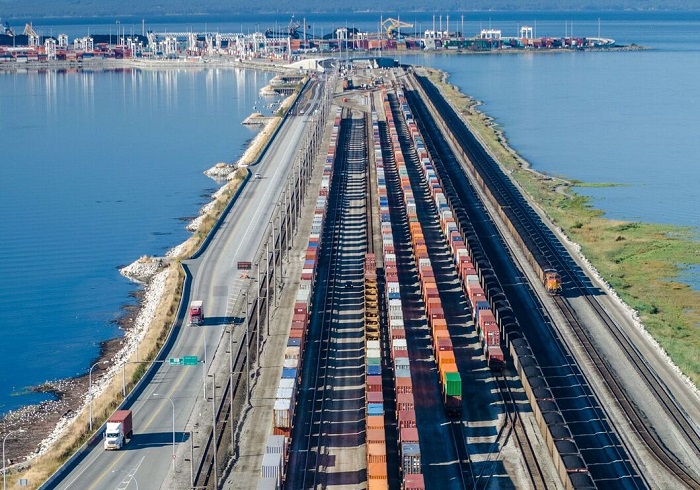 The $300 million project went live in September and will be fully completed when the final two tracks open later this spring. Photo credit: Shutterstock.com.

TSAWWASSEN, British Columbia — GCT Deltaport, the largest marine container terminal in Vancouver, would still be digging out from an early year volume surge if a newly completed, semi-automated rail project wasn’t allowing them to recover in a matter of days rather than weeks.

The $300 million project, which went live in September and will be fully completed when the final two tracks open later this spring, allows GCT to build longer trains faster and with less human accident risk. The project boosts the 210-acre terminal’s annual capacity from 1.8 million TEU to 2.4 million. Ultimately, the expansion and semi-automation of its rail facility allows Deltaport to recover faster from cargo surges — whether they be from mega-ship bunching and the larger import discharges they bring, inclement weather, or both.

“We had a rockslide. We had some protests. Cargo wasn’t moving, but now we’re in position to recover,” Daniel Howell, vice president, terminal operations, Deltaport, told JOC.com in an interview last month, as rail barricades linked to protests against a pipeline in Western Canada compounded the disruption caused by a rail line temporarily obstructed by landslides. “Last year it would have taken a month for us to recover; (this year) it took us just four days.”

Managing surges to they won’t hinder train starts is essential for the terminal, given that 73 percent of volumes moving through Deltaport are transported via rail, and of that, 38 percent is going to or from the United States. Canadian Pacific and Canadian National railways each operate two outbound container services from Deltaport.

The operational efficiencies of the project are achieved through the eight electric, wide-span Kuenz intermodal cranes being fed by manually operated auto-decoupling yard tractors that deliver containers from the vessel. The cranes no longer have to wait for tractors and can increasingly complete dual transactions, reducing dwell times and boosting velocity.

The surge capacity the rail project provides Deltaport will allow the terminal to not only better handle existing cargo but attract new shipments if carriers are experiencing issues at other marine terminals and ports, said Eric Waltz, GCT Canada president and CEO. “You’re going to come to us to recover. We can help you get cargo back on schedule," he said.

Before the rail facility expansion, GCT would build about 28,000 to 30,000 feet of container on tracks daily, but now it assembles 37,000 to 40,000 footage of train a day, Howell said. When the final two tracks come online in late May or early June, bringing the facility's trackage to seven, he said it will be able to build 45,000 to 55,000 footage of train a day over a five-day period.

A long, challenging road to completion

The rail project wasn’t easy and came online a year later than planned. The International Longshore and Warehouse Union (ILWU) Canada was less than enthused about the automation aspect of the project, and some of their frustration fed into a short-lived strike in which the refusal of employers to discuss a framework for automation was a key roadblock to a contract agreement, which was eventually reached. ILWU Canada wasn’t available for comment.

The patience of rail partners was tested as delays mounted, Howell admits. But now, CN and CP are praising the flow the project delivers to their rail operations. In a December interview, CN President and CEO Jean-Jacques Ruest said that “since Deltaport finished the automation, it’s finally really working well.”

Deltaport now enjoys the lowest on-dock rail dwell times in North America, Johnathan Wahba, CP's vice president of sales and marketing for intermodal and automotive, said at the JOC North America Port Performance conference in December. Rail dwell times at Deltaport rose to three to five days last month, when rail networks were challenged by barricades, but have since fallen to under three days, according to performance metrics on the port of Vancouver website.

In hindsight, Howell said the project would have been easier if work began early because it’s hard to expand rail capacity while operating a terminal with no surge capacity. “We did open heart surgery on a man running a marathon,” he quipped.

Complicating the project further was that it involved many vendors and what GCT believes is the first use of mining technology to create a system where automated cranes and longshore workers can work alongside each other without risk. Although the cranes are operated remotely from a tower, reducing the need for labor, there are times when workers have to manipulate stackers. When that happens, resistance temperature detection (RTD) tags on workers, creating a so-called virtual halo, not only prevent cranes from striking longshore personnel, but by tracking the speed and direction of human movement, the cranes make the most efficient moves around workers as possible.

“Without the ILWU buy-in and support, we wouldn’t have the operation we have,” Howell said.

Canada Trade and Shipping Outlook
TPM22: What We Learned — Container Shipping in the Crosshairs
Managing E-Commerce From Order to Delivery and Beyond
END_OF_DOCUMENT_TOKEN_TO_BE_REPLACED