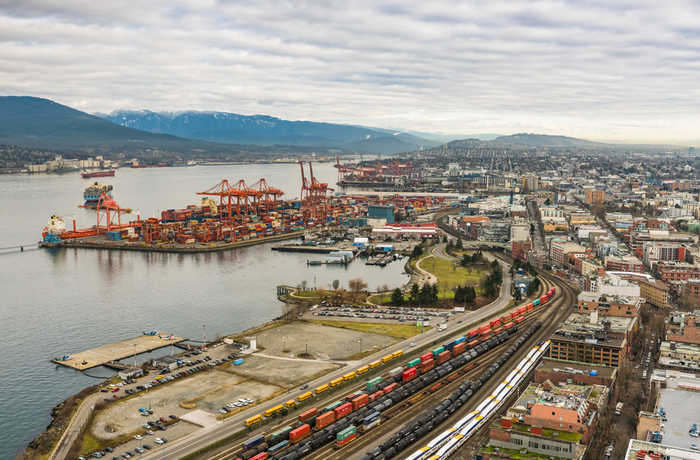 The partnership allows both companies to make the most of limited industrial real estate space in the greater Vancouver market. Photo credit: Shutterstock.com.

Canadian Pacific Railway and Maersk Line will build and operate a transload and distribution facility at the railroad’s existing terminal in the Port of Vancouver, a move they said will allow them to move e-commerce and other goods out of Canada’s largest port in a tight warehousing market where marine terminals can quickly become constrained.

The facility, set to open in 2021, will allow Maersk and CP to better serve time-sensitive shipments by providing shippers more control of their cargo via transloading from ocean containers into 53-foot domestic trailers and, ultimately, faster transits. The pact advances CP’s efforts to deepen its presence in Vancouver, its sole western Canadian port gateway, and Maersk’s evolution into a so-called global integrator by expanding its reach beyond port-to-port shipping.

The partnership allows both companies to make the most of limited industrial real estate space in the greater Vancouver market. Real estate broker CBRE warned last year that the region may run out of industrial space over the next few years, according to a report from Bloomberg News. Because utilization rates at Vancouver’s marine terminals are elevated — 75 percent last year, according to the Vancouver Fraser Port Authority — facilities are at a greater risk of becoming congested due to weather issues, import surges, and the bunching of mega-ship calls.

Global Shipping Outlook: A Sneak Peek at 2021
Port Performance North America: Managing Cargo Flow During a Pandemic — and Beyond
END_OF_DOCUMENT_TOKEN_TO_BE_REPLACED