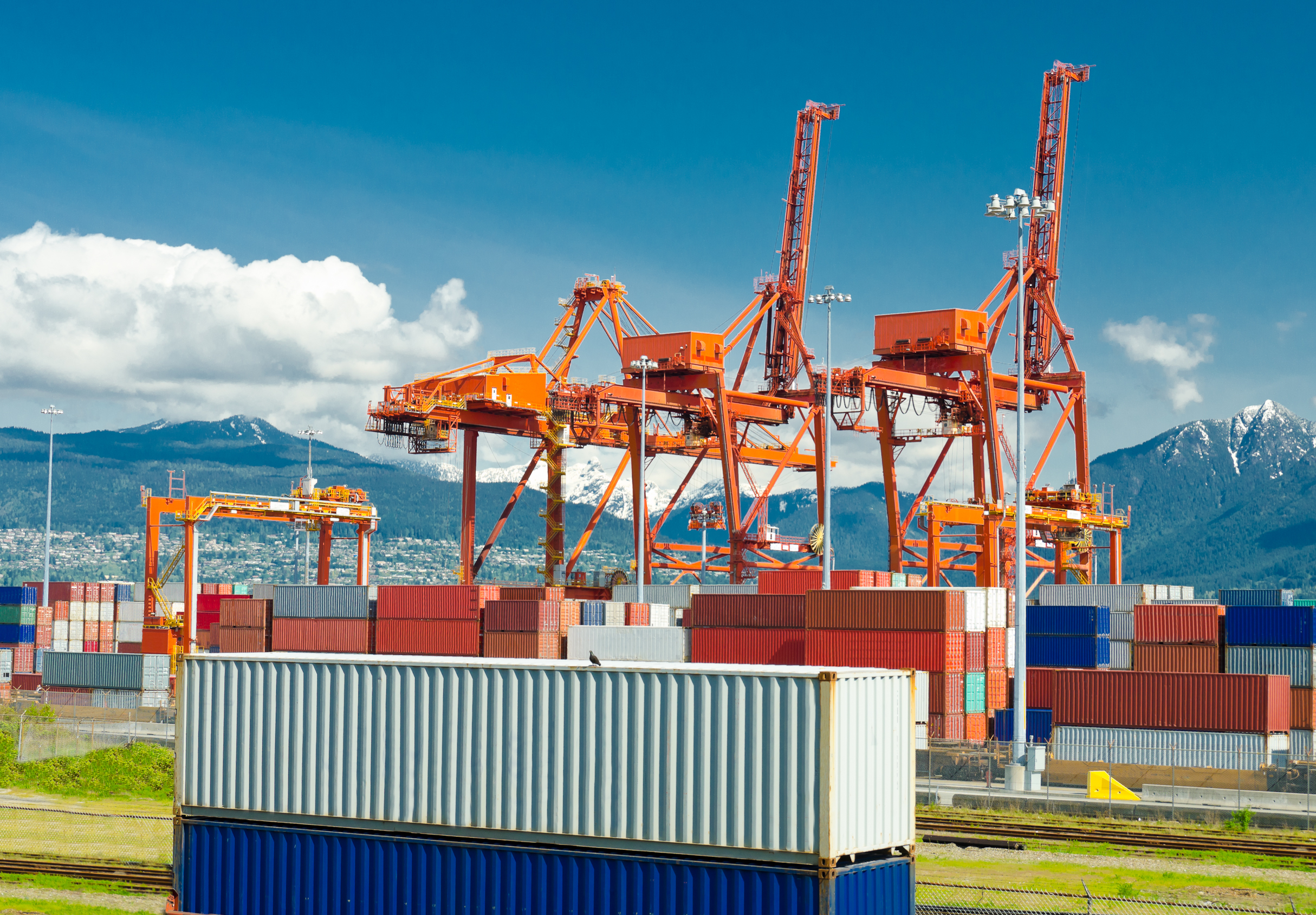 Port of Vancouver terminals are operating at 85 percent utilization, with container dwell times in excess of seven days in some cases. Photo credit: Shutterstock.com.

A surge of cargo in the last month through the port of Vancouver has pushed terminals to their limit, with facilities at 85 percent utilization, compared with a maximum industry standard of 80 percent. That’s caused a doubling of container dwell times at rail facilities, underscoring the need for additional infrastructure to handle future growth at the largest port in Canada.

Like at this same time last year, a spike in imports ahead of Chinese New Year has overwhelmed rail capabilities, increasing dwell time — the time it takes for a container to move from the terminal yard to rail ramp. The front-loading of US imports ahead of a March 1 deadline that will trigger an automatic increase in tariffs on $200 billion-worth of Chinese-made goods from 10 percent to 25 percent has only added further pressure to the port.

Container dwell times at Deltaport, Vancouver’s largest terminal, last week were in excess of seven days. Dwell times at the Centerm Terminal averaged three to five days, and at Vanterm dwell times averaged five to seven days, according to statistics published on the port’s website. Vancouver, like most major gateways in North America, considers dwell times of three days or less necessary to prevent containers from backing up at the terminals. Only once in the past 12 months, last May, did Vancouver register a portwide dwell time of less than three days.

The primary causes of excessive dwell times at Vancouver have been rail service issues, increasing container volumes, and the unprecedented container discharges from mega-ships. As a result, capacity utilization at Vancouver’s three largest container terminals is exceeding what the industry considers full capacity. “All of the terminals are at 85 percent utilization,” said Cliff Stewart, the port’s vice president of infrastructure.

Port and terminal managers in North America consider terminals to be operating at maximum capacity when utilization is at 80 percent. When that level is exceeded, terminals begin to stack containers in locations not designed for storage, the yards are not capable of clearing out inbound containers before the next vessel arrives, and truck turn times increase.

When marine terminals are operating at or beyond efficient capacity, they can normally handle growing container volumes, but when there is a glitch due to weather, construction, or an accident, it can take as much as five weeks to recover, Stewart said.

The port authority believes terminal and rail expansion projects that are under way or have been completed will carry the port forward until a major container terminal project at Roberts Bank Terminal is finished around 2029. The project is currently undergoing a federal environmental assessment by an independent review panel and will require additional permits and authorization before work can begin. “We are anticipating that project construction would be complete in time to prevent capacity shortfalls on the West Coast of Canada,” the port stated in a release.

Canadian Pacific Railway acknowledged the increase in container dwell times, attributing them to extreme weather coupled with storms in Asia and subsequent vessel bunching in Vancouver. “We would expect our dwell times to return to near normal averages in the weeks ahead,” said Jonathan Wahba, CP’s vice president of sales, marketing, and automotive.

Similar congestion that has plagued the ports of Los Angeles-Long Beach and New York-New Jersey in recent months, due to strong cargo volumes and unexpected import surges to get ahead of current and planned Trump administration tariffs on more than $200 billion of imports from China, has generated excessive truck turn times at the two largest US gateways.

Unlike at the US ports, however, truck turn times in Vancouver have been well below the danger level, said David Earle, president of the British Columbia Trucking Association. Truck turn times are averaging 34 minutes at Centerm, 39 minutes at Vanterm, and 49 minutes at Deltaport, he said. Truckers say one-hour turn times are good, and it is preferable that they be below one hour. By contrast, turn times the past two months in Los Angeles-Long Beach have averaged 90 minutes, up from less than 80 minutes during the summer months, according to the Harbor Trucking Association.

Vancouver in recent years has made deep inroads into the US market. The Canadian National and CP railroads offer direct service to Chicago, the largest US inland hub, as well as destinations in the South and eastern half of the country. Marine terminal and rail infrastructure at the port have not been able to keep up with the increased volumes.

“Business is increasing faster than the growth in cargo-handling capacity,” said a terminal executive in Vancouver. In calendar year 2018 Vancouver’s total laden and empty container volume increased 4.4 percent over 2017, according to port statistics. Vancouver accounts for more than 48 percent of the regional market share of imports from Asia moving through Seattle, Tacoma, and Prince Rupert in the Pacific Northwest, according to PIERS, a sister product of JOC.com within IHS Markit.

More recently, growing containerized exports have added to the complexity of vessel operations, according to the terminal executive. Unlike handling the return of empty containers, which can be loaded easily onto vessels, terminals must carefully stow loaded export containers on the vessel by destination and according to weight. Since many exports from North America are heavy commodities, they must be loaded onto the vessel according to a plan that balances the vessel contents for safety purposes.

During the harsh winter of 2017-2018, CP and CN experienced significant delays along their main lines, and the delays rippled back to Canada’s Pacific Coast ports. The railroads each year publish their winter operational plan. This year’s plan focuses on ensuring they have sufficient locomotive power, rail cars, and crew positioned in the western provinces to handle the increased cargo volumes and excessive container dwell times in Vancouver.

“We are already seeing improvements, and we are continuing to work with our supply chain partners to continue improving the performance of the system as a whole,” said CN spokesperson Jonathan Abecassis. “This is a supply chain issue which goes beyond railroads. Short-term, pipeline management is important, but considering the importance of the port of Vancouver for the Canadian economy, long-term solutions will require capacity improvement by all players in the supply chain,” he said.

CN earlier this month announced a $3.9 billion capital investment plan, $3 billion of which is earmarked for infrastructure maintenance and expansion, including rail yards and the mainline. Of that amount, $400 million will be invested in new tracks and double-tracking projects, mostly in western Canada. CN is also investing $700 million for 140 new locomotives, $100 million on intermodal terminals, and another $100 million on intermodal equipment such as cranes, chassis, containers, and tractors.

The federal Canadian Transportation Agency in January held hearings and received testimony from beneficial cargo owners (BCOs) concerning rail service to Vancouver for all types of cargo, including intermodal. The investigation involves whether railways in the Vancouver area are giving preference to some cargoes over others. As Canadian shippers increase both their imports and exports due to participation in various international trade agreements, there is growing competition among BCOs for rail capacity in the British Columbia Lower Mainland.

For CN, however, crude oil movements account for only 2 percent of its annual carloads system-wide and 1 percent of its carloadings in Vancouver, while intermodal accounts for 16 percent, “showing that CN has committed infrastructure, equipment, and people required to move intermodal,” Abecassis said.

Wahba said CP’s inbound supply of railcars has been fluid and adequate to all three of the Vancouver terminals it serves. “With our inland terminal capacity at Montreal, Toronto, and Chicago and our ability to cycle assets with our domestic repositioning program, we remain well positioned to continue to deliver for the supply chain and our customers,” he said.

Railroads are usually able to expand their infrastructure faster than marine terminals due to the long lead times to construct and expand terminals in congested port areas while cargo-handling continues to take place. With terminal utilization at 85 percent, expansion becomes much more complicated and can cause delays in the harbor area, as occurred during the expansion of Deltport’s rail facilities last year.

Stewart said DP World, which operates Centerm, is engaged in a three-year project that will increase the terminal’s footprint 15 percent and annual throughput capacity 65 percent to 1.5 million TEU. Centerm demonstrated during its last expansion about 15 years ago that it was able to carry on with construction while minimizing the impact on traffic and cargo-handling, he added.

In addition to the impact of the unexpected increase in container volumes that Vancouver experienced due to the US-China trade war, a Jan. 28 ship-to-shore crane accident at GCT Vanterm caused the collapse of the crane and its boom on top of the vessel. “As a consequence of the incident and related operational impacts, GCT is working directly with affected customers on a ship-by-ship basis, until vessel servicing gradually returns to normal in the coming weeks,” said GCT Global spokesperson Louanne Wong.