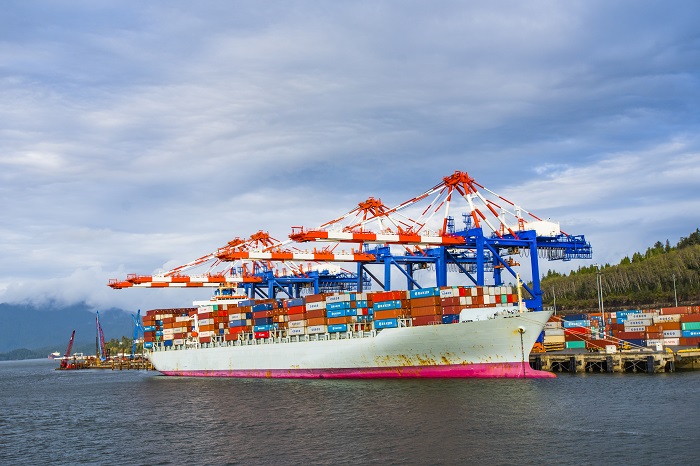 The port of Prince Rupert plans to double its container capacity by 2020 and ultimately quadruple its capacity, sending a bold message as fellow British Columbia port Vancouver grapples with its own plan to inject much-needed handling capacity into its terminals.

The Prince Rupert container terminal master plan released this week outlines projects that will potentially add 6-7 million TEU of capacity, and in the short term, help to accommodate growth on Canada’s Pacific Coast. The announcement comes amid conflicting proposals by the Vancouver Fraser Port Authority (VFPA) and its largest tenant, GCT Canada, on how Canada’s largest port will expand to accommodate future growth.

Last year, Canada’s ports, like those in the US, found that their resources were taxed by events over which they have no control, including weather that affected intermodal rail operations in Canada and the US, poor vessel on-time performance in the trans-Pacific, capacity issues at inland rail hubs, and the US-China tariff war that disrupted normal shipping patterns and produced unexpected cargo surges. Ports must therefore scramble to develop surge capacity to handle such unscheduled events.

The two ports, both of which have direct intermodal rail connections to the US Midwest and beyond, have ambitious expansion plans, but given the lead time required to secure environmental permits and meet local construction requirements, the big-ticket expansion projects will not be completed until the mid- to late 2020s, port managers have told JOC.com.

In terms of accommodating Canada’s trade with Asia, Prince Rupert and Vancouver together are viewed as a key gateway, so development projects at the two ports complement each other. According to a report by Black Quay Consulting, Vancouver and Prince Rupert combined have a current capacity of 5.34 million TEU. The 4.4 million TEU handled by the two ports last year means Vancouver and Prince Rupert are operating at 82.4 percent of their combined capacity. The industry standard for the terminal-operating industry is that service levels deteriorate when facilities exceed 80 percent utilization, and their ability to respond to container surges is compromised.

Shaun Stevenson, Prince Rupert’s president and CEO, said that there is no firm timeline yet for the South Kaien Island terminal, but when a decision is made to move forward and the necessary permits have been secured, construction will take about three years. Given those requirements, the port views it as a “mid-to late 2020s project,” he said. Stevenson stressed that South Kaien Island is a good location for a container terminal. In fact, the port authority in the early 2000s actually considered it for the first container terminal but opted for the Fairview site.

The three major container terminals in Vancouver — Deltaport and Vanterm (which are operated by GCT Canada) and Centerm (operated by DP World) — also have short-term expansion projects planned or under way. Those projects will increase the terminals’ capacity incrementally into the mid-2020s. The total expansion projects in Vancouver and Prince Rupert should provide Canada’s Pacific Coast with enough capacity to handle organic growth from vessel upsizing, a port engineering consultant told JOC.com. However, the Canadian ports would be constrained in attempting to attract additional vessel strings during that period, he added.

That makes the development of a second terminal at Prince Rupert’s South Kaien Island a crucial next step to meeting projected growth on Canada’s Pacific Coast from the mid-2020s until Vancouver’s Roberts Bank Terminal 2 (RBT2) comes online in the late 2020s.

The port of Vancouver is working through the permit process to move the RBT2 project along, but it has been met with resistance from GCT Canada, which operates the port’s largest container terminal, Deltaport.

“The Roberts Bank Terminal 2 project is the only project that could be ready in time to meet demand by the late 2020s because it is the only project currently in the environmental assessment process,” said Duncan Wilson, vice president environment, community, and government affairs at the port of Vancouver. “All projects currently in development in Prince Rupert and Vancouver are needed to handle Canada’s growing trade,” he said.

Meanwhile, GCT Canada is seeking permission for construction of a fourth berth at Deltaport. That project would increase the terminal’s annual handling capacity to 4.4 million TEU from its current 2.4 million TEU. However, the port of Vancouver said that project, if approved, could not be completed until sometime after 2030.

GCT Canada has filed two applications for judicial review related to the proposed fourth berth at Deltaport. Eric Waltz, president of GCT Canada, told JOC.com in April that after years of review and preliminary studies by experts, it was determined that the Deltaport expansion project is environmentally feasible. When the port authority notified GCT Canada it would not accept its application for review, GCT’s only option was to file a judicial review against the decision to block the project from proceeding through the required regulatory process, he said.

“We wanted the VFPA, our regulator and landlord, to give fair consideration to a less expensive, less risky to taxpayers, and more environmentally-conscious alternative, which they failed to do, choosing instead to reject our project out of hand," Doron Grosman, president and CEO of GCT, said in a statement.