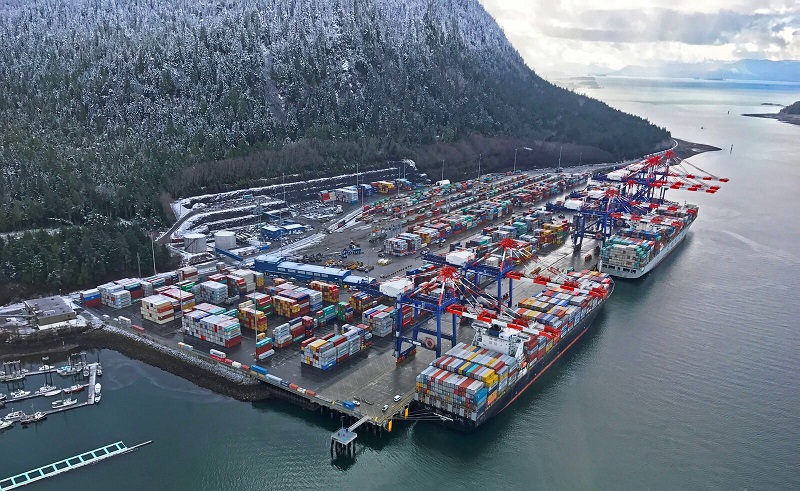 Less than a year after completion of a terminal expansion project, the Port of Prince Rupert is positioning itself to increase market share in North America’s competitive Pacific Northwest region with the announcement Tuesday that it will increase its annual throughput capacity an additional 33 percent to 1.8 million TEU with further expansion of its Fairview container terminal.

The 22-acre expansion, scheduled for completion in 2022, will intensify the battle for market share a notch in its competition with Vancouver and the Northwest Seaport Alliance (NWSA) of Seattle and Tacoma. Prince Rupert last year increased its regional market share 0.7 point to 12 percent. Vancouver’s share increased 0.4 point to 48.5 percent and the NWSA's share decreased 1.1 points to 39.5 percent according to PIERS, a sister product of JOC.com.

Beneficial cargo owners in eastern Canada and the US Midwest should welcome the expansion as a step toward preventing a return of the congestion that Prince Rupert experienced last winter. The congestion began last autumn when a surge in container volume ran into completion of the previous expansion project, which increased its capacity to 1.35 million TEU. Container dwell times doubled to six days during the winter months due to severe weather and intermodal rail service problems. Canadian National Railway operates a direct service from Prince Rupert to Chicago.

Speaking on a panel at JOC Canada Trade Conference in Toronto, Brian Friesen, director, of trade, development, and communications, at the Prince Rupert Port Authority, said the terminal could avoid some of the problems created in the last phase of the expansion – which contributed to the rail service issues of last year.

Friesen said that the first 27 months of the 30-month project expansion project went without a hitch, but the terminal ran into trouble when it had to remove some railway track to install new gantry cranes.

“The railway track actually was reduced for a short amount of time, before it could be increased,” he said. But in the next phase, the terminal will install some new track and extend existing track, giving the terminal at least 18,000 feet of track – plenty enough to meet capacity demand, he said.

“In these kinds of projects, sometimes there is short term pain for long term gain,” Friesen said. “These are big, big projects but looking at the next phase ... I think we will be in a good position to perform, and add a much needed capacity.”

Prince Rupert’s torrid growth continued into 2018, with container volume growing 18.7 percent in the first quarter to 174,987 TEU compared with a year earlier, according to PIERS. Prince Rupert, located about 500 miles north of Vancouver, increased its cargo volume last year by 28 percent compared with 2016 to 926,540 TEU.

Rapid growth in container volumes can lead to increased terminal congestion. A rule of thumb in the marine terminal industry is that cargo-handling efficiency tends to erode when a terminal reaches 80 percent utilization. The expansion of the container yard at Prince Rupert will be complemented by an expansion of on-dock rail capacity. This is crucial for a port whose traffic moves almost 100 percent by rail. The port will add 6,680 feet of working track for a total of 24,680 feet.

CN, the only railroad to serve Prince Rupert, had rail service issues last winter due not only to the extreme cold and snow, but also because of insufficient crew and locomotives. CN is moving forward with investments in assets and infrastructure, Jean-Jacques Ruest, interim president and CEO, said on Tuesday. “Together with our supply chain partners, this expansion, combined with CN’s investments in British Columbia and across its rail network, positions us to drive this unique trade gateway success story forward,” he said.

Seattle and Tacoma are engaged in terminal modernization and process improvements designed to enhance efficiency and increase cargo velocity. Now that the two ports plan and market themselves as a single gateway under the NWSA, they are concentrating on a strategic effort to re-engineer the port complex, with the long-term goal of reducing facilities from eight to probably four large, modern, more efficient terminals, according to CEO John Wolfe.

US West Coast ports face a major challenge in competing with the Canadian ports because of the significant cost differential in serving Chicago, North America’s largest rail hub. According to a study by consultants Andy Penfold and Dean Davison, intermodal customers save about $600 per container when shipping via CN and Canadian Pacific through Vancouver to Chicago, compared with the rates charged by BNSF Railway and Union Pacific from US West Coast ports. Reminded of the cost differential at an address to the Agriculture Transportation Coalition Conference on June 13 in Tacoma, Tom Chmielowski, BNSF’s director of international sales and marketing, said customers choose to ship via BNSF because they find value in its rail system.