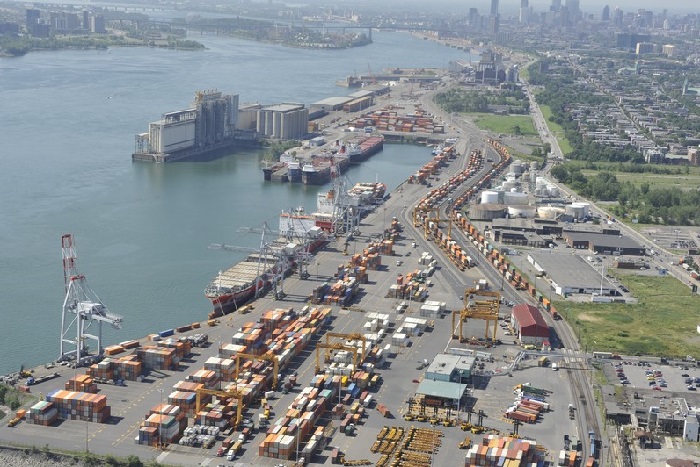 Montreal's congestion, over several months, prompted the port and various stakeholders, among them a transportation research agency called CargoM, to conduct a pilot study of the impact of extending the gates, which concluded that it had improved fluidity at the port. (Above: The port of Montreal.) Photo credit: Port of Montreal.

All four terminals at the port of Montreal will extend their daily gate operating hours to 17 hours and fund it with a $35 per container fee, a move expected to enable shippers to get cargo in and out of the terminal more quickly, and consistently, even as cargo volumes rise by high-single digits.

Termont Montréal Inc., which operates Maisonneuve and Viau terminals, said it will begin extending its gate hours to 11 p.m. — from 7 p.m. at present — on Sept. 17, the same day that the policy will be enacted by Montreal Gateway Terminals Partnership, the operator of Racine and Cast terminals. All terminal gates at present open at 6 a.m. and close at 7 p.m., a schedule that was adopted in May.

Prior to that, the gates closed around 2:30 p.m. But the terminals extended their hours in response to trucker complaints that the delay in entering the port had substantially worsened since the end of 2017, with some saying they had to wait two hours or more to get in. The problems stemmed from a variety of factors, including a lack of rail cars coming to the port, the impact of bad weather, vessel bunching, and a rise in cargo volumes.

Montreal — a port in demand

The port handled 8.3 percent more cargo in the first seven months of the year than the same period a year before, moving 960,751 TEU in 2018, of which 85 percent was loaded containers, according to the port website.

The congestion, over several months, prompted the port and various stakeholders, among them a transportation research agency called CargoM, to conduct a pilot study of the impact of extending the gates, which concluded that it had improved fluidity at the port.

Termont Montréal Inc., announcing its decision to permanently extend the gates, said that “with a growing focus on fluidity, flexibility, and maximizing assets, our industry supply chain partners identified the need to extend gate hours to help smooth wait times for truckers coming to the Port de Montreal.” The study showed that the initiative “was a resounding success, and more in line with what other ports are doing across Canada,” the terminal operator said.

The port of Montreal’s dashboard, which reports the turn times at each terminal in real time, showed they ranged at 2:20 p.m. Wednesday from 59 minutes at Cast terminal to 23 minutes at Maisonneuve terminal. The Montreal Port Authority said in April that although 60 percent of truck turn times were less than an hour, nearly one in five was longer than 90 minutes.

Montreal is the latest North American port to try extending its terminal gate hours to improve cargo fluidity in and out of the terminal, and to place a charge on containers to pay for it. In Vancouver, Global Container Terminals Canada, for example, is testing a pilot project that places a $35 flat fee at its Deltaport Terminal and Vanterm Terminal to answer the requests of beneficial cargo owners and truckers for improved gate productivity at its Deltaport terminal. That has temporarily replaced a congestion-based daytime fee of $50 per truck.

In Southern California, the ports of Los Angeles-Long Beach are mulling a flat fee of $63.04 per FEU on both the day and night shifts, to replace the congestion pricing fee of $144.14 per FEU that the ports levied 13 years ago on trucks coming in the day shift.

In Montreal, CargoM said the partners involved in the study, about 60, found the extended hours had improved fluidity and the operations of the terminals, and found that “terminal operators are encouraging companies to use their [extended] operating hours more frequently.”

Magali Amiel, director of strategy and projects at CargoM, said the port is still working to improve fluidity through the gates from 2:30 p.m. to 3:30 p.m., when there is a shift change and traffic slows. “It is not a big issue but the Maritime Employers Association and the terminals are working together to keep a good fluidity at the port and to increase it,” she said.

Tony Boemi, vice president, growth and development, at the Montreal Port Authority, said there has been “significant improvements in truck waiting times” at the port.

“We are especially pleased that this is no longer a temporary measure but permanent working hours to deal with the increased volumes,” he said.