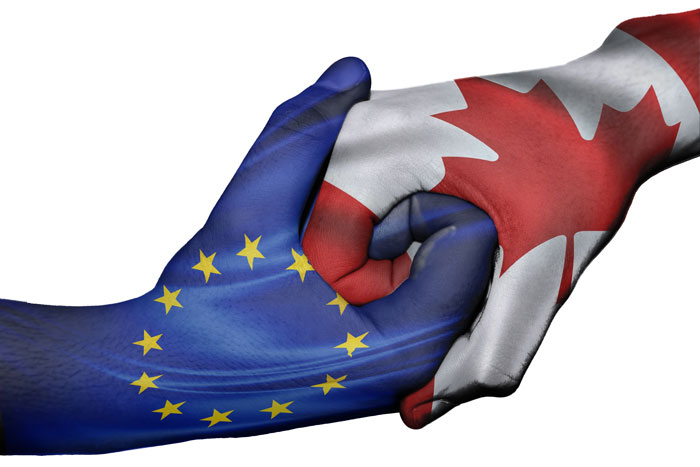 The long-term outlook for the trans-Atlantic container trade between Canada and Europe brightened this month with the agreement in principle on the text of a new free trade agreement. Executives at Canada’s two main east coast container ports of Montreal and Halifax say it will boost their volumes.

It will take another year or more for the draft text to be finalized and ratified by Brussels and Ottawa, but the ports already are laying the groundwork for expansion to handle the additional volumes they expect. “We are gearing up for the FTA with Europe, which gives us confidence that traffic will go up,” said Tony Boemi, vice president of growth and development at the Montreal Port Authority.

“We see a lot of potential in this agreement because we are the closest full-service port to Europe,” said Lane Ferguson, a spokesman for the Port of Halifax. He said the port expects to see a 20 percent increase in export shipments after the pact takes effect. Halifax has 17 shipping lines that link it with Europe.

Montreal already is expanding its capacity from 1.6 million 20-foot-equivalent container units to 2.2 million by the end of this year. It also has compacted and repaved the yard of a former bulk terminal at Viau and Maisonneuve so that it can be quickly converted to handle future container growth. Montreal’s terminals are currently limited to handling ships of up to 6,000 TEUs. The port is working on a design that will enable it to boost this limit to 7,000 TEUs.

Halifax last year completed a $35 million expansion of Pier C at the Halterm Container Terminal, which installed two super-post-Panamax container cranes at $10 million each that can reach across 22 rows of containers. Halifax will complete the $70 million expansion of its multipurpose Richmond Terminal in the third quarter of this year.

The terminal is expected to benefit from substantial increases in project and breakbulk cargo generated by the $122 billion in mega-projects underway in Atlantic Canada. These include the $30 billion contract to build Canadian Navy ships, awarded to Irving Shipbuilding’s yard next to the terminal; the $8.5 billion Muskrat Falls hydroelectric project in Newfoundland, and the link to connect it to Labrador; and various large mining and offshore oil projects.

Montreal’s throughput increased to 692,000 TEUs in the first six months of 2014, up 4.4 percent year-over-year. Boemi said some of the increase was because of cargo diverted from U.S. West Coast ports during labor talks between the International Longshore and Warehouse Union and the Pacific Maritime Association over a new union contract. Some of the increase was fueled by the inclusion of CMA CGM in a vessel-sharing agreement with Maersk Line on the TA-4 service, which has brought the French carrier’s ships into the port.

Throughput at the Halifax, however, dropped 8.1 percent in the first half to 224,582 TEUs, largely because of severe winter storms in the first quarter. Ferguson said throughput started to recover in May and June, and he expects growth to continue through the rest of the year.

Montreal expects full-year volumes to increase 4 to 4.5 percent because of growth in refrigerated imports from and forest products exports to Latin America carried by Mediterranean Shipping Co.’s direct service between Freeport, Bahamas, and Montreal. From Freeport, cargo is transshipped throughout the region.

The port also is benefiting from increasing imports from Asia that are transshipped at hubs in the Mediterranean. The port is getting numerous inquiries from carriers that want to increase their imports from Asia via the Med, Boemi said.