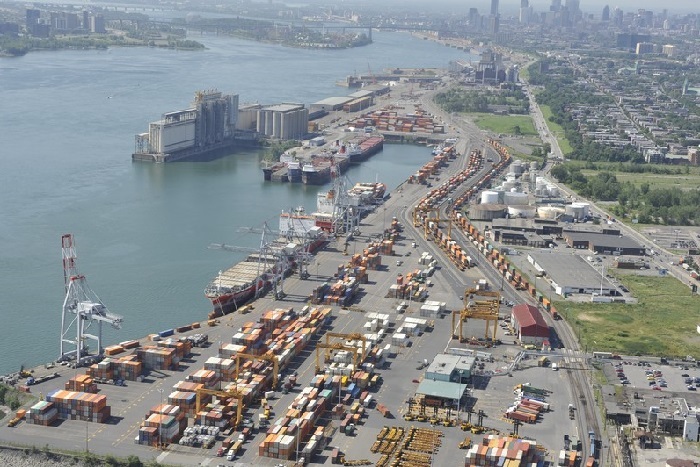 The port expects there to be a “dry period,” in which there is little shift among truckers toward moving cargo in the evening instead of the day, because it takes time to adjust their business, said Daniel Dagenais, vice president of operations for the port of Montreal. Photo credit: The port of Montreal.

After extending gates to boost fluidity, the port of Montreal says more off-hour truck pickups are needed to handle rising volume, road construction delays, and a new federal rule that will put even more pressure on truck drivers to get in and out of terminals faster.

Although the longer terminal gate hours introduced in September — from 6 a.m. to 11 p.m., instead of closing at 3 p.m. — have improved fluidity, only about 20 percent of the cargo volume has shifted from daytime pickup or delivery to the evening, speakers on Wednesday told JOC’s Port Performance North America Conference in Newark, New Jersey. Truckers continue to experience elevated turn times and congestion, a problem that the Montreal Port Authority (MPA) is seeking to curb with a new phone application update launched this week that alerts users when the terminal wait time is elevated, enabling them to take action to avoid the delay.

The port expects there to be a “dry period,” in which there is little shift among truckers toward moving cargo in the evening instead of the day, because it takes time to adjust their business, said Daniel Dagenais, vice president of operations for the port of Montreal.

“The trucking companies were very, very clear,” during discussion of the gate extension, that the program should be permanent to give truckers, shippers warehouse owners, and other parts of the supply chain time to adjust, Dagenais said. “It has to be known by everyone that it is a permanent fixture and it will be part of the environment for a long time.”

Martin Roy, vice president of USA transportation for Groupe Robert, one of the largest trucking companies serving the port, said part of the problem is that many drivers don’t want to work evenings.

Canada, too, will require the electronic logging device

The company also is struggling to add drivers because Canada, like the United States, is facing a driver shortage, in part due to the aging workforce and disinterest among younger workers in truck driving. That is expected to worsen with the introduction next year of new rules that require all truckers to use electronic logging devices (ELDs), similar to rules in the United States that dramatically tightened capacity and propelled double-digit spot and contract truck rate increases. Although the rules are expected to take effect in 2019, Transport Canada, which oversees the transportation industry, has not released a date for the rules’ implementation.

Truckers also face fluidity problems from infrastructure construction projects in the area around the port, Roy said. Those are expected to continue in the near future.

“The port did a good job of extending the hours,” said Roy, adding that “we're still facing struggles from day to day with the amount of congestion.”

The port began a pilot of extended gate hours — initially closing at 7 p.m. — in May after suffering several months of truck congestion and delays beginning late last year, with wait times that truckers said could be two hours or more. The problems stemmed from a variety of factors, including a lack of rail cars coming to the port, the impact of bad weather, vessel bunching, and a rise in cargo volumes.

Cargo volume through Montreal jumped 9.3 percent year over year, to nearly 1.4 million TEU, in the first 10 months of 2018 compared with the same period in 2017, according to the MPA.

After the pilot program proved successful — the authority said it cut between 34 minutes and 52 minutes from the average time taken for a truck to enter the port, go into a terminal, pick up or drop off a container, and depart — the four terminals agreed to a permanent gate extension until 11 p.m. The extended operating hours are funded with a $35 per container charge.

The MPA this week launched an upgrade to its Trucking Portal app that provides real-time information on the time taken to get through each of the port’s four main gates. Truckers using the app can receive real-time notifications on traffic conditions, which roads are accessible, and operational issues and constraints, allowing them to take action to pick up or drop off a box more efficiently, the authority said.

“The idea is to change behavior,” said Dagenais, adding that the port is working on a predictive analytics-based app that will give advanced warning of upcoming congestion at a terminal.