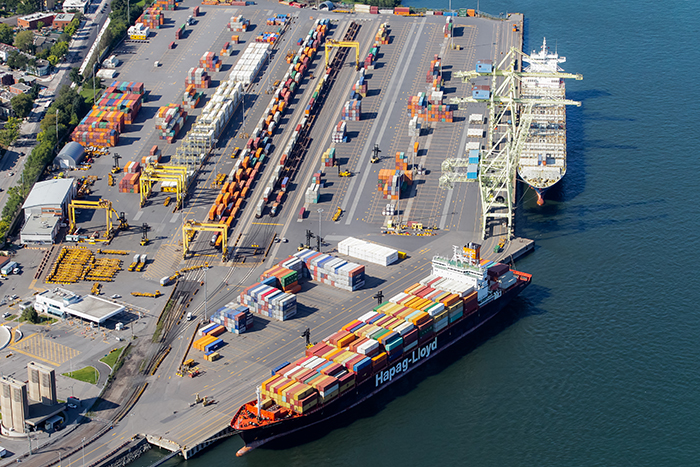 The port of Montreal has attracted its third trans-Atlantic service in a year and a new carrier in Cosco Shipping, further fueling high-single digit volume growth aided by a new trade agreement between Canada and the European Union.

The new service, COSCO’s first at Montreal, will call on Antwerp, Bremerhaven, Le Havre, and Liverpool before heading to Montreal, the only port of call in North America before the ship heads back to Antwerp. The service will stop at the port’s Racine and Viau terminals, and will be operated with 4,800-TEU average vessels on OOCL’s GEX1 service.

The service adds a seventh carrier to Montreal’s roster and will add to the rapidly growing cargo volume through the port, which saw a 9.2 percent increase in loaded and unloaded cargo in 2018, to 1,679,251 TEU over the year before. Port volumes increased by 8 percent in the first two months of 2019, to 258,773 TEU, over the same period in 2018.

Tony Boemi, vice president of growth and development at the Montreal Port Authority, said the new service “reaffirms Montreal as the major gateway for eastern Canada, and the industrial heartland of North America.” The addition “also reinforces the need to complete our expansion projects,” especially the proposal to add a terminal at Contrecoeur of more than 1.1 million TEU to allow for growth expectations.

Maersk Line, announcing its new service in May, said it was prompted by the belief that demand for services to Canada is growing. The carrier said it considered the implementation of the Comprehensive Economic and Trade Agreement (CETA) in September 2017 to be a key factor in deciding to launch the new service. The agreement eliminated tariffs on 98 percent of trade between the two partners. The carrier, saying it was adapting to Montreal’s growing cargo volume, dropped the port of Halifax from the route to speed up the trip from Montreal to Europe.

Hamburg Süd’s new service connects Montreal to the ports of Algeciras and Valencia in Spain, Fos-sur-Mer in France, and La Spezia and Salerno in Italy.