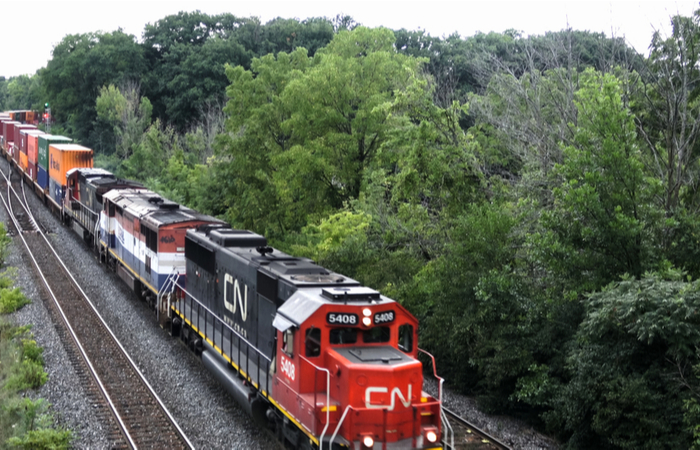 Reduced service on Canadian National Railway lines is putting stress on the ports of Halifax, Montreal, and Vancouver as import cargo piles up. Photo credit: Shutterstock.com.

Rail blockades are slowing shipments to and from the Canadian ports of Vancouver, Montreal, and Halifax, creating backlogs at the marine terminals and hampering domestic and international shipments.

With Canadian National Railway’s Eastern Canadian network virtually shut down due to First Nation blockades protesting a planned pipeline, shipping and other business groups are urging Prime Minister Justin Trudeau to bring an end to the conflict.

“It’s been a week now, and it’s starting to bite,” said Dave Earle, president of the British Columbia Trucking Association, referring to how reduced rail services at the Port of Vancouver are putting the onus on truckers as marine terminals max out on storage capacity. “Getting a box takes longer now.”

Vancouver continues to dig out from its congestion problems that began a week ago. The port authority on Friday cautioned beneficial cargo owners (BCOs) and truckers to anticipate delays in taking delivery of containers.

A statement from the port on Friday noted that the delays in berthing vessels, which started at the weekend, were expected to continue at least through this week. The port authority also provided directions to vessel operators as to how to position the ships when anchorage spots are full.

Although the landside impact until now has been on rail operations at Canada’s largest container port, congested terminals are now limiting the ability of truckers to access the facilities.

Rail container dwell times, which consistently are in the three-day range at container terminals in Vancouver, spiked this past week to five days or longer at the Vanterm, Centerm, and Deltaport terminals served by CN trains, according to the port’s website. However, dwell times for rail containers improved Tuesday to mostly three to five days, according to the daily rail report.

The CN rail service serving the Port of Prince Rupert is continuing without interruption after resuming late last week.

Lane Farguson, a spokesperson for the Port of Halifax, through which about 60 percent of the cargo moves by rail, said the port is open, and operating relatively normally, but containers are piling up in the yard.

“Without rail, import cargo destined for inland markets cannot move from the terminals and within a couple of weeks, yard storage space will be used up,” Farguson said. “When the Port of Halifax is no longer able to accept import cargo destined for inland markets, carriers may stop calling and this will impact the majority of local cargo bound for international import and export markets. Simply put, if the ships aren’t calling, cargo isn’t moving.”

For the moment, vessels are able to berth, and there is no “backlog at anchorage,” he said. The port has not lost any vessel calls due to the disruption, and the terminals — South End Container Terminal, operated by PSA Halifax; and Fairview Cove Container Terminal, operated by Ceres Halifax — are operating normal schedules and gate hours, Farguson said. Container dwell times have so far not been affected, according to the port’s website. The average number of days on the dock — 0.9 — is the lowest it has been all year, the website shows.

The Port of Montreal, in two tweets sent late Tuesday, said vessels are arriving and departing on schedule, but the port is seeing “certain impacts” on its rail operations.

“Our intermodal network, including trucking, allows us to continue to serve a large part of our clientele,” one tweet said. “That said, we are currently managing greater logistical complexity in our operations.”

Tony Boemi, vice president for growth and development at the port, said the situation at the moment is “manageable.”

Although about 45 percent of the port’s cargo goes by rail, the port has benefitted from having two railroads, Boemi said. So while CN has been disrupted, some carriers have “switched their routings” to Canadian Pacific Railway, which is largely unaffected, he said. Still, “minimal” cargo is moving by CN, so about 10 to 15 percent of the port’s cargo is affected by the disruptions, he said.

“There have been disruptions,” Boemi said, adding that it is too early to tell how dwell times are affected. “And as new vessel arrivals are expected, it is adding some pressure to ensure that we avoid congestion.” So far, the port is unaware of any carriers diverting vessels, he said, adding that “we could foresee a change if the situation doesn’t resolve itself soon.”

While the rail delays could generate some business for truckers, the Canadian Trucking Alliance (CTA) said Tuesday many trucking moves begin and end at the rail ramp.

“The supply chain is not only integrated from a supplier perspective; it’s integrated modally as well. When the railways suffer disruption in service, it impacts everyone in the economy including the trucking industry,” CTA said in a statement. “When bridges and roads are blocked, trade stops and other modes and business sectors which depend on trucking services are negatively impacted.”