Canadian ports zero in on fast release from mega-ships

Canadian ports zero in on fast release from mega-ships 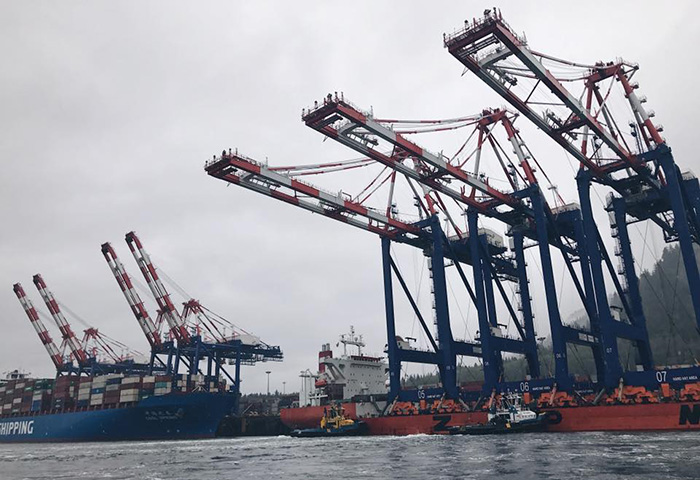 New cranes at Prince Rupert are just one example of the improvements underway at Canadian ports.

TORONTO — With plans to invest almost $2 billion in marine terminal and transportation connectors, Canada’s ports are developing the infrastructure needed to reliably handle growing volume and larger ships — the biggest at 13,000-TEU so far. But equally important for beneficial cargo owners, of Canadian and increasingly US-driven cargo, is the fast release of cargo to shippers, a challenge since unloading a mega-ship can take three days more.

“With the big ships now, speed and flexibility are as important as reliability of service,” Gary Fast, associate vice president of international transportation at Canadian Tire, told the JOC Canada Trade Forum in Toronto last week.

Volume through the ports rose 4.6 percent year over year in 2016 to 5.1 million TEU, on a strengthening economy. Real GDP rose 3.7 percent quarter to quarter on an annualized basis, marking the third consecutive quarter with above 2.5 percent growth in Canada, according IHS Markit research. Full-year GDP growth is expected to come to 2.6 percent, with exports growing 1.2 percent and imports increasing 2.6 percent.

The greatest impact of mega-ships on marine terminals is the doubling of container moves per vessel call, also known as container exchanges, because the cargo surges stress vessel, yard, and gate operations. Montreal, a destination port where 100 percent of each vessel is discharged and reloaded, understands that reduced container dwell time and improved cargo velocity are crucial to preventing yard and gate congestion. “As a destination port, we’ve been doing 3,000 moves for 25 years now,” said Daniel Dagenais, vice president of operations.

Due to draft limitations, Montreal is not handling the 10,000-TEU ships that are becoming more common today at the coastal ports. The Atlantic and Pacific ports, by contrast, are one of several port stops for vessel strings, so their container exchanges have been somewhat smaller. That is rapidly changing, however, with container surges from the mega-ships deployed by the new carrier alliances being two to three times what they used to be.

Prince Rupert, located about 500 miles north of Vancouver, will open next month a second berth at its Fairview container terminal. Although the port has yet to announce additional services, container exchanges on its existing services are so large that the additional berth is needed, said Shaun Stevenson, vice president of trade development and public affairs. Prince Rupert has been handling 13,000-TEU ships for some time now, and the new berth is designed to handle ships as large as 20,000 TEU, should vessels of that size ever call, he said.

Vancouver is pursuing several expansion projects at existing facilities, as well as a longer-term plan to build a new container terminal at Roberts Bank that will have capacity of 2.4 million TEU, with estimated completion in the mid-2020s.

Ports today must be a seamless link between marine terminals and inland destinations, so Canada’s ports are concentrating on process improvements. “Cross-dock to domestic rail and overnight to Montreal,” is how Paul Duvoisin, vice president commercial at the Port of Halifax, described the process of handling import containers. The hand-off from marine terminal to rail and truck is crucial when handling time-sensitive shipments, and the last thing the port needs is a congested container yard or long truck lines at the gates, he said. “It takes continuous improvement, with technology being the driver,” Duvoisin said.

Technological advancements are streamlining every segment of the transportation supply chain. Ports and their terminal operators are quickly adopting new tools to reduce costs and take dwell time out of the logistics move. Container tracking, bluetooth, and GPS tools to measure container dwell times and truck turn times, and most importantly, the use of predictive analytics are where the biggest gains in productivity will be realized. Dagenais said technology is best deployed not necessarily to measure what is happening now, but rather “to predict what will happen tomorrow,” he said.

The use of technology to reduce container dwell time and improve cargo velocity is a two-way street that requires information sharing from cargo owners as well, Fast said. Canadian Tire uses demand forecasting to continually update carriers, terminals, and service providers what its transportation and equipment needs will be, he said. The effort also involves keeping commitments, such as fulfilling the minimum quantity commitments (MQCs) that Canadian Tire details in its service contract negotiations each year, he said.

Canadian ports have a generally good reputation for collaborating with terminal operators, railroads, truckers, and the provincial and federal governments in planning their infrastructure needs, but more recently the emphasis has been on the operational side. Cross-sector working committees share data on key performance indicators such as container dwell, truck queues, and transit times. The stakeholders meet and agree upon steps that must be taken to remove bottlenecks and improve performance. “It didn’t use to be like that,” said Keith Reardon, vice president of intermodal and automotive at Canadian National Railway.

With intermodal rail traffic continuing to grow at many container ports, on-time performance is an increasingly important indicator of the efficiency of the vessel-to-inland transportation provider. By pre-planning vessel loading overseas and coordinating service needs with railroads on the receiving end, “hot hatches plus destination trains” are reducing end-to-end transit times, Reardon said.

Equipment shortages and dislocations are common at many ports, especially in Canadian and US ports where imports often account for about 60 percent of the cargo mix. Merchandise imports are destined for the large cities, but exports, especially agricultural commodities, originate in distant locations in the interior. The costly repositioning of empty containers to the rural agricultural regions can sometimes make export commodities uncompetitive in the global market. Fast said some importers like Canadian Tire are connecting with exporters in various regions to arrange match-backs that reduce the cost of container repositioning.

Ports must serve as facilitators in bringing together representatives of the maritime community and local industry as well as local government to develop supply-chain logistics solutions for their gateway, said Jim Quinn, president and CEO of Port Saint John. As a gateway for New Brunswick, eastern Canada and the US Northeast, the port has been able to marshal the resources of its container terminal operator, DP World, transportation providers and New Brunswick’s industrial leaders to improve the competitiveness of importers and  exporters in the region, he said. Quinn announced at the conference that strategy resulted in attracting a new service by CMA CGM to Port Saint John.

Montreal’s strategy is to develop rail and truck clusters to provide logistical support to importers and exporters in order to streamline the supply chain, Dagenais said. “Velocity creates value. That’s where the true value is,” he said.