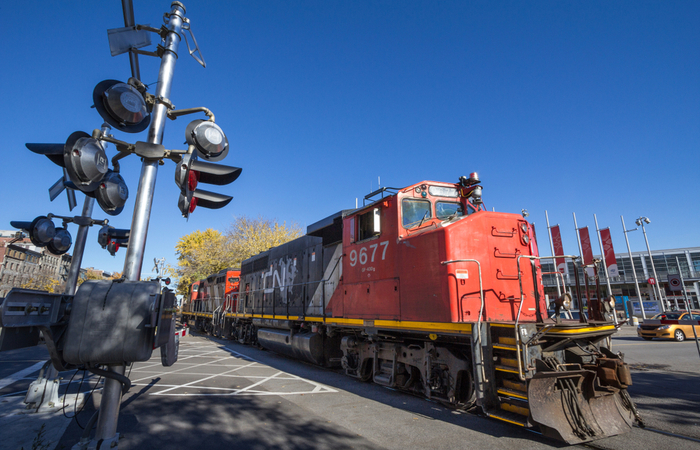 Rail service to the ports of Vancouver and Prince Rupert has been restored, but the Port of Montreal has only limited service from Canadian National Railway. Photo credit: Shutterstock.com.

Limited cargo flowed through the Port of Montreal on Canadian National Railway Wednesday as ports on both Canadian coasts took steps toward recovering from the protest blockades that cut CN’s cargo nationwide by more than 25 percent over the last two weeks.

While the situation has improved slightly in Montreal, the Port of Halifax said it still has no CN service, and the Western ports of Vancouver and Prince Rupert are seeing reduced dwell times as they clear up the cargo backlog with the help of restored rail service.

Despite the removal of a blockade on the Canadian National Railway line at Tyendinaga by Ontario Provincial Police Monday morning, the line into Montreal from Toronto remained impassable due to the emergence of several new blockades, Daniel Dagenais, vice president of operations for the Montreal Port Authority, told JOC.com.

But CN, using an alternative route, is moving some trains in and out of the port, albeit using shorter trains than normal, and with a lower frequency than is needed to handle the heavy volume of cargo in the port, he said.

“Things are slowly returning to normal,” Tony Boemi, vice president for growth and development at the Port of Montreal, told JOC.com. That’s partly due to the decision by some shippers to move cargo from CN to Canadian Pacific Railway, which also serves the port, and by an increased use of trucks, especially on the route to Toronto, Dagenais said.

CN president and CEO Jean-Jacques Ruest told the CITI 2020 Industrials Conference on Feb. 20 it will take several weeks for the railroad to work its way through backlog of cargo nationwide once the blockades are removed, according to a webcast of the speech.

The return of limited train service prompted Montreal Gateway Terminals Partnership (MGTP) Monday evening to lift the force majeure it implemented last week as the volume of import containers built up. Force majeure is a contract provision that allows for the release of a party from contract obligations if circumstances beyond their control arise and the party can’t fulfill those obligations. In response to the force majeure, for example, CMA CGM told customers that all inland cargo would have to be “evacuated immediately,” and the terminals would charge  containers dwelling more than five calendar days for storage, starting Tuesday.

Michael Fratianni, president of MGTP, said the company lifted the force majeure after seeing the blockade removed, and in consultation with CN about the still-evolving state of affairs. “Trains are running now, but the situation remains delicate,” he said.

The blockades, which indigenous groups began nearly three weeks ago to protest the construction of a gas pipeline, have disrupted lines operated by both CN and CP, but have affected CN more severely.

CN moved a total of 350,349 intermodal containers in the first eight weeks of 2020, a 7.7 percent decrease from the same period in 2019, according to figures from the Association of American Railroads (AAR). The Class I railroad’s intermodal volume was down nearly 30 percent year over year last week and 24.5 percent the week before.

At the Port of Halifax, which is served only by CN, the situation has not changed, and trains are not running, said Lane Farguson, the port’s spokesperson.

Meanwhile, the Pacific Northwest ports of Vancouver and Prince Rupert, which experienced rail service disruptions earlier this month due to blockades erected by First Nations demonstrators in Western Canada, are steadily returning to more normal conditions. There have been sporadic protests near downtown Vancouver marine terminals since then.

“We’re working hard to restore fluidity,” Brian Friesen, vice president of trade development and communications at Prince Rupert, told JOC.com Wednesday. Regular service by CN was restored on Feb. 14. Although rail container dwell times are still not back to the sub-three-day level the port is used to, dwell times are improving, Friesen said.

Prince Rupert in 2017 opened a second berth at its Fairview container terminal, so the port is able to handle two vessels simultaneously if needed, he said. Prince Rupert has four trans-Pacific liner services each week.

Rail container dwell times were also improving this week in Vancouver, Canada’s largest container port. The average dwell time on Tuesday was between three and five days at the Deltaport and Centerm terminals and greater than seven days at Vanterm, according to data published on the Port of Vancouver website. Average rail container dwell times for the 10 months beginning April 2019 were 3.2 days or less, with the times below three days in every month except January and February this year.

Vancouver continues to deal with congestion as a result of weather issues and line outages, but fluidity is overall steady, said Danielle Jang, spokesperson for the Port of Vancouver. The port had four container ships at berth, and one at anchor, Thursday, she said.

Global Container Terminals (GCT) Canada, which operates the Deltaport and Vanterm facilities, noted that a number of factors since January have affected both rail and trucking operations in Vancouver. In addition to the usual cold-weather operating constraints, the railroads reported weather-related rockslides and washouts in late January and early February. The blockades erected by demonstrators in early February also interrupted rail services to the British Columbia ports, a GCT spokesperson told JOC.com Wednesday.

“Despite challenges in the supply chain, GCT Canada terminals remain fluid and continue to operate,” the spokesperson said. “GCT Deltaport terminal in particular has been successful to date in maintaining cargo velocity through our semi-automated rail yard operation, and access to intermodal connections serviced by both Class I railways.”