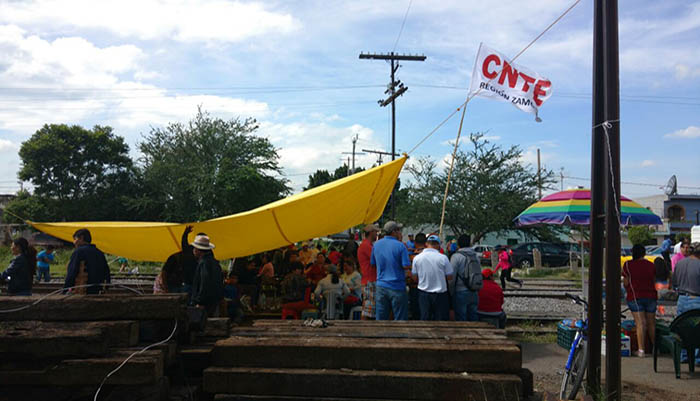 A blockade of trains by angry Mexican teachers has left 4,000 twenty-foot-equivalent units in mid-shipment by Maersk Line in limbo, with some stranded on rail lines and others unable to be moved in or out of the Port of Lazaro Cardenas.

Late last week, Maersk learned that the blockade in the Lazaro Cardenas area had expanded to include the rail link to the port of Manzanillo, preventing the movement of containers there, Pablo Flores, trade and marketing manager for Maersk Line Middle America said Friday. On Monday, he said that the situation had not improved in either port over the weekend.

The industrial action by the teachers union, Coordinadora Nacional de Trabajadores de la Educación, or CNTE, has affected the port since July 11, with protesters stopping freight trains from moving on the line that links the port to the rest of the country, said Flores. The teachers are protesting government education reform plans, with some teachers particularly angered by a requirement that they undergo mandatory periodic evaluations.

The paralysis highlights the risk of disruption to goods sent through Mexican ports and comes as the government is investing $5 billion in its ports in an effort to create an efficient, competitive port system, in part with the hope for providing alternative routes to goods heading to the U.S.

The protest has affected two ports that were Mexico’s highest-ranked on JOC.com’s Top 25 North American Container ports, which was based on the volume of containers handled in 2015. Manzanillo handled 1.75 million laden TEUs, and Lazaro Cardenas handled 680,000 laden TEUs, in 2015.

Officials for Ferromex, which serves Manzanillo, did not respond to requests for comment.

The release said “the greatest area of impact is the line that runs from Lazaro Cardenas through Morelia to Toluca,” and added, “This line is currently blocked and impassable. As a result of these blockages, there are delays and service disruptions throughout the network particularly in the areas of Sanchez, Monterrey, Escobedo and Queretaro.”

KSC late Monday afternoon issued a release that said “the protests are continuing to impede KCSM’s ability to provide efficient freight rail service to its customers.” The release added that “at this time it is not possible to project when regular service will be restored, nor estimate the financial impact, if any, the protests will have on” Kansas City Southern.

Flores said Maersk is closely monitoring the blockade situation, and looking for the best way to mitigate the effect on customers.

“What we are offering customers is basically to change transport mode,” Flores said. “So instead of moving the cargo by rail, then they move it by truck.”

However, that would involve additional cost, with customers having to decide whether they can accept that higher cost, Flores said. For example, taking a container to Mexico City from Lazaro Cardenas by truck, instead of rail, increases the cost by 24 percent, and a taking a shipment to Monterrey from Lazaro Cardenas is 40 percent more expensive by truck than rail, he said.

Far fewer containers, around 160 TEUs, have been affected at Manzanillo, he said.

Until Manzanillo was affected by the blockade, some customers were already diverting their containers there, to avoid Lazaro Cardenas, Flores said. Both ports are on the route for imports from Asia anyway, so such a switch did not require any additional stops, he said.

In addition, Maersk was watching to see how full with containers Lazaro Cardenas would get, as import boxes continued to arrive and stayed at the terminals because they couldn’t be moved inland by train, he said.

“If the terminal in Lazaro gets completely saturated” with containers, Maersk may divert containers to Manzanillo, Flores said, last week, adding, however, that such a move was not imminent.

“If this problem persists for weeks and months, and customers do not decide to move out their cargo by truck — then that may force us to use Manzanillo as an alternative,” he said.