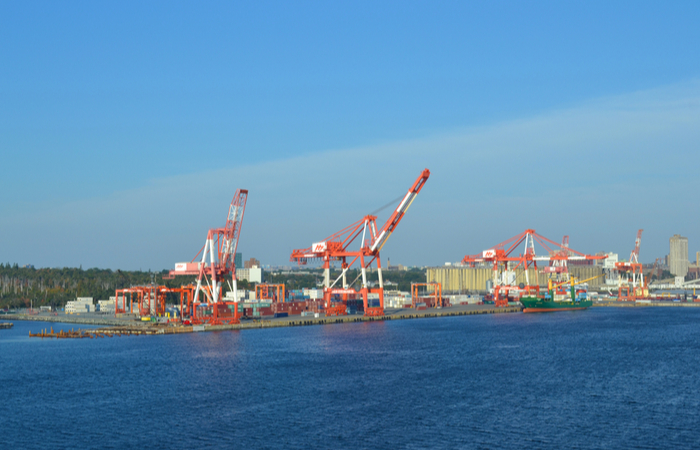 Two vessels of up to 15,000 TEU will be able to dock at the same time at the South End Container Terminal at the Port of Halifax by the end of March. Photo credit: Shutterstock.com.

A berth extension that will enable the Port of Halifax to simultaneously handle two vessels of 14,000 to 15,000 TEU will be completed by the end of March. Port officials say the self-imposed deadline ensures Halifax stays competitive as ocean carriers turn to larger vessels.

The extension at the South End Container Terminal — already the largest marine terminal in Eastern Canada — will create a 52.5-foot-deep berth that is 2,890 feet long, up from 2,165 feet.

The Halifax Port Authority (HPA) has said in the past it wanted the extension in place at the start of 2020 to compete with other ports for ocean carrier attention as liners planned their vessel use for the next five years.

The port will be able to handle two large ships at the same time as soon as the berth extension is completed, said HPA spokesperson Lane Farguson. Terminal operator PSA International has ordered a new super post-Panamax crane for the extended berth and a rubber-tire gantry (RTG) crane to add to four super post-Panamax cranes already in place along the pier, he said.

“This increased capacity is very important for the shipping lines that call on Halifax and for our terminal operator,” Farguson said. “Having additional ultra-class vessel capacity creates the conditions for increasing the volume of containerized cargo moving through our international gateway.”

Cargo volumes through the port are about flat this year, after declining in 2018 and seeing rapid growth in the three years before that. The port handled 416,883 loaded and unloaded TEU in the first nine months of 2019, down 0.1 percent from the same period in 2018, figures on the HPA website show. Cargo volumes increased 48 percent from 2013 to 2018, the figures show.

The port considers the berth extension at the PSA International terminal a temporary fix while it looks for a permanent solution. A strong option is the expansion of the PSA terminal to create a second permanent berth, with increased container storage space.

Singapore-based PSA International took control of the South End Container Terminal, previously known as the Halterm Terminal, in May after it beat out a joint bid by Canadian National Railway and CMA CGM, as well as bids from Montreal-based Logistec and others.