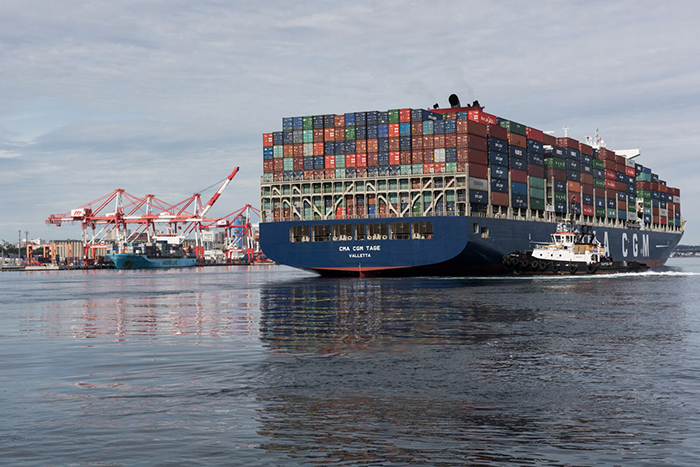 Halifax beat out 22 North American ports to be the third-fastest growing of the continent's Top 25 ports in 2016.

Halifax had been looking to renew its lease on life after a rough winter in 2014 and later failing to benefit from the severe congestion at US West Coast ports that diverted so much Asia cargo to the East Coast. In a year’s time, the Nova Scotia gateway has added two new trans-Pacific services and a new north-south service, boosted its container traffic, and carved out a sizeable share of the North American container trade. Consider that lease renewed.

Sustaining the brisk pace of container business that started last year has been possible, in part, thanks to Halifax’s success wooing the largest container cargo shipping line in the Caribbean away from the nearby Port of Saint John, 127 miles west. Tropical Shipping cited one reason for its move: connectivity, both via Canadian National Railway (CN) to the US and Canadian heartland and to the other global shipping companies that call on the Port of Halifax that offer transshipment opportunities.

Tropical Shipping began operations at Halifax’s Halterm Container Terminal on January 9 after 15 years operating out of the Port of Saint John. Tropical’s Vega Omega, a 1,118-TEU vessel, will handle more than 550 containers through Halifax in peak-season, including more than 200 refrigerated containers for export. Its move to Halifax and the line’s weekly service to Florida, the Bahamas, Puerto Rico, and the Caribbean is considered a strategic move for the Nova Scotia port, where only about 12 percent of the total traffic is with the Caribbean and the Mediterranean.

“The Halifax Port Authority is focused on the Caribbean,” Lane Farguson, a spokesperson for the port authority told JOC.com, adding that other priorities include “South and Southeast Asia via the Suez Canal.”

Tropical Shipping’s addition hasn’t hurt Halifax’s early 2017 performance, but it’s that Asia traffic, which makes up roughly half of the port’s total throughput, that has been the principal driver for container traffic growth last year and into 2017.

Halifax’s recent container traffic growth — split between its Halterm and Ceres terminals — follows on the heels of similar gains last year. In 2016, Halifax was the third-fastest-growing port in North America, outpacing all but the ports of Mobile and Los Angeles, No. 1 and No. 2, respectively. The port finished 2016 with throughput up 15 percent year-over-year to 387,077 TEU.

Much of its recent growth has come from additions to its trans-Pacific service offerings made over the course of the past year. The Port of Halifax already had one Asian service with Zim, the ZCP Service via the Panama Canal, but added two new Asian services via the Suez canal last year, one with Hapag-Lloyd of the THE Alliance and the other with CMA CGM of the Ocean Alliance.

When the first of Halifax’s new trans-Pacific services were announced in 2015, some doubted the new Asia calls would mean Halifax would handle more containers. However, there are advantages that Halifax boasts, by nature and design, that make it a top choice for shippers.

Montreal is closer to the main import markets in Ontario and the US Midwest and has rail connections via CN and its rival Canadian Pacific Railway (CP). “The one thing about Montreal, though, the volume that they handle there is quite significant, but they consider themselves somewhat of a niche port. It's 1,000 miles inland, by fresh water,” said Bob Ballantyne, president of the Freight Management Association of Canada, whose group represents more than 100 Canadian shippers.

Halifax, on Nova Scotia’s eastern coast, is actually on the ocean, and is also one of the farthest points east in Canada that still has retained intermodal rail service with a major carrier after the 1990s. CP and CN began cutting rail service to destinations farther east than Montreal after the National Transportation Act of 1987, Ballantyne told JOC.com, “which made it a lot easier for CP and CN to offload their low density branch lines.”

According to Ballantyne, Halifax’s rail connections are ideal for reaching end markets in southern Quebec, Toronto, and Southern Ontario, as well as the Midwest US through Chicago.

According to Halterm CEO Kim Holtermand, that cargo can move inland by CN rail in less than 36 hours on average.

In addition to those advantages over Montreal, Ballantyne said, “Montreal can’t take the big ships and they’ll never be able to handle the big ships; 6,000 or 7,000-TEU is about the maximum that they would normally handle.”

With a harbor depth of 16 meters, or just more than 52 feet, at the container terminals, current infrastructure at Halifax can accommodate vessels as large as 16,000-TEU, according to Farguson and Holtermand.

“The terminal itself has no navigational restrictions, is one hour from the pilot station, and equipped to handle vessels up to 22 containers wide in,” Holtermand said. “We have the advantage of a very minimal deviation from the major shipping routes.”

While the largest vessel Halifax has seen to date was 9,400-TEU, Farguson said the port expects its first 10,000-plus-TEU ship, the Zim Antwerp, sometime before the end of June.

In addition, similarly sized mega-ships should be calling on the port and its Halterm terminal with more regularity after the recent signing of the Comprehensive Economic Trade Agreement (CETA) between Canada and the European Union, said Holtermand.

“While some shippers may be finding that traditional cross-border trade within North America is becoming more expensive, Halterm’s broad range of services to and from Asia, Northern and Southern Europe, the Caribbean and within Canada, now offers many new options,” he told JOC.com. “For shippers keen to offer more sustainable all-water transit and for those looking to capitalize on the free trade opportunities that lie ahead, Halifax’s growth and Halterm’s proven capabilities provide a range of exciting supply chain solutions.”