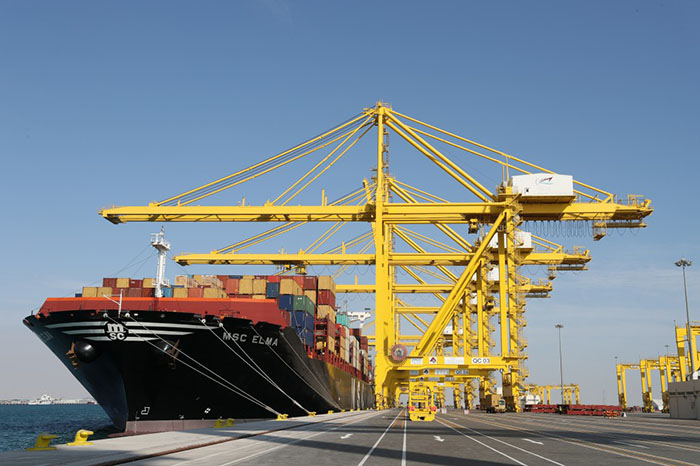 Hamad Port’s receiving of its first ship from Shanghai as part of a regular service on Jan. 26 marks a new way for shippers to feed the Persian Gulf region through recently opened transshipment hub.

An inbound stop at Colombo enables access to Qatar for shipments from south and east India and elsewhere, while connections to international services and transshipment ports from Qatar are made via India’s Mundra port on the outbound leg.

The MSC Elma arrived at Hamad after sailing from Shanghai Jan. 5, according to Qatar Ports Management Company. The Elma is deployed on Mediterranean Shipping Co.’s New Falcon service, which utilizes eight ships with capacities of 8,000 twenty-foot-equivalent units.

When all phases are complete, the first container facility at the port, called CT1, will have a total quay length of 3,937 feet, a draft of 56 feet, and a set of modern service equipment including 8 ship-to-shore cranes, 26 rubber-tire gantry cranes, 2 reach stackers, and 6 forklifts. The terminal will be capable of loading 2 million 20-foot-equivalent units annually in the first phase

When the port’s next two stages are complete, its capacity will reach 6 million TEUs per year.

The port, which replaced the outdated and congested port of Doha as Qatar’s main gateway, is a critical piece in Qatar’s plans to increase its exports in an effort to diversify its economic activity and reduce its reliance on oil and natural gas as economic engines.