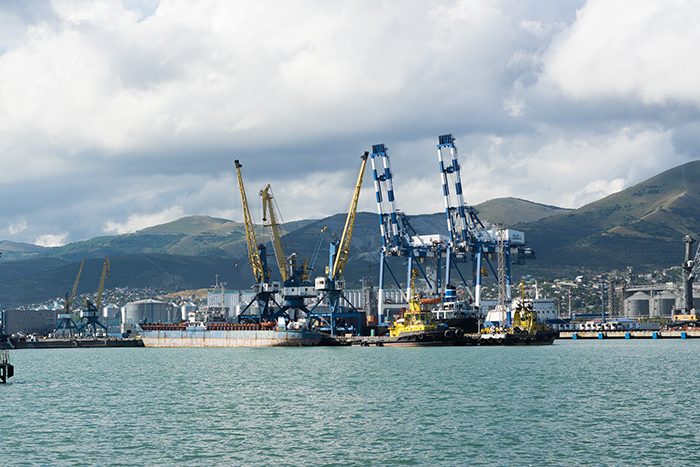 Traffic at the Port of Novorossiysk rose more than 15 percent through August. Photo credit: Shutterstock

Plans to expand the port of Novorossiysk that will more than double the size of ships able to call there to between 8,000 and 10,000 TEU could make the port a major Black Sea hub.

The port is constructing a new berth with an annual capacity of 250,000 TEU and a depth of 15 meters (49 feet), and larger ships should be able to call by the middle of next year, according to remarks of Dmitry Kutateladze, development director of Ruscon, one of Russia’s largest transportation companies, in the trade publication RZD-Partner.

The terminal would handle calls from mainline service originating in Asia, said Kutateladze, noting that one issue that will have to be addressed is the imbalance between imports and exports that means many exports will be of empty containers. Despite that, the project is moving ahead as feeder service consolidates and shipowners look for ways to deploy large tonnage to the Black Sea.

Novorossiysk is the second-busiest port in the Black Sea after Constanta, Romania, Kutateladze said.

As Novorossiysk’s traffic has recently expanded more quickly than Constanta, analysts in the Russian Ministry of Transport believe that Novorossiysk has the potential to overtake Constanta in the coming years.

Traffic at Novorossiysk grew 5.1 percent year over year in 2016 to 612,410 TEU, while traffic at Constanta increased 3.2 percent to 711,339 TEU. In the first eight months of this year, Novorossiysk’s traffic surged 16.8 percent to 489,330 TEU. Traffic results for Constanta will be available at the end of the year.

Novorossiysk currently has three international ocean services, with one each from Southeast Asia, India, and Ecuador, along with several local and regional feeder services.