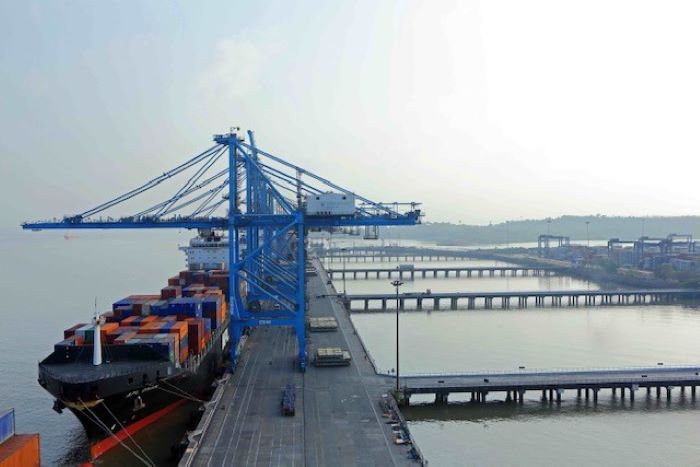 JNPT’s own terminal has had the lowest gate-out numbers out of five terminals in the harbor in recent days. Photo credit: Shutterstock.com.

But an analysis of yard inventory levels at Jawaharlal Nehru Port Trust (JNPT) suggests the proactive measure is proving to be counterproductive on the pace of cargo clearance.

JNPT’s own terminal, which took the lead in responding to trade concerns over clearance delays because of truck driver scarcity, has had the lowest gate-out numbers out of five terminals in the harbor in recent days, the authority highlighted in its latest trade advisory.

To illustrate, out of 3,624 TEU held at the terminal yard on Sunday, JNPT said only 559 TEU were cleared by container freight station (CFS) service providers, raising yard inventory levels to 4,583 TEU on Monday. With the port design essentially modeled on an off-dock customs ecosystem for space reasons, the JNPT shipper community predominantly follows a "CFS delivery" method.

By comparison, other terminals operated by APM Terminals, DP World (two facilities), and PSA International have reported lower inventory levels, which JNPT put at 2,216 TEU, 6,985 TEU (combined), and 2,990 TEU, respectively. Ironically, these private terminals have much higher capacity and volumes.

“Due to poor rate of deliveries by CFSs, JNPT yards are getting clogged up and congested, which is resulting in an increase in import dwell time of CFS containers as well,” the port authority said. “This is also causing a lot of hindrance to our [cargo] handling and disturbing our yard planning.”

JNPT’s own terminal has suspended ground rent charges until March 31, while PSA’s Bharat Mumbai Container Terminals (BMCT) is offering an additional three free days. Other JNPT operators have yet to announce any such trade-centric measures, while many container lines have put a hold on the levy of detention fees, with Maersk’s waiver remaining valid through April 7.

“It can be seen that maximum pendency [backlog] is at the JNPT yard, which clearly implies that CFSs are not picking up containers only from there for the reason best known to them,” the port said.

Concerned over unreasonable trade behavior, JNPT cautioned that it may have no choice but to delay berthing of vessels arriving with import containers until the backlog is cleared.

Efforts to seek comment from JNPT’s private handlers were unsuccessful.

Meanwhile, taking a cue from the Adani Group, more terminals, including APM Terminals Mumbai, have declared force majeure.  At the same time, some industry groups, particularly the Indian National Shipowners’ Association (INSA), have urged the government to reconsider the move, citing the “essential service” rationale.

Terminals at Chennai and Cochin are operating at about 40 percent capacity at present, sources said.