Montreal to extend gates in bid to curb congestion

Montreal to extend gates in bid to curb congestion 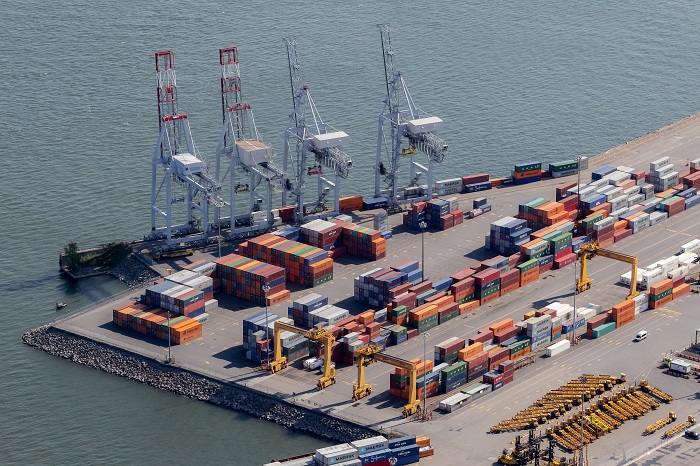 Shippers that have looked to Montreal as a relatively congestion-free port may find that extended gate hours curb the longer turn times of recent months. Further, a five-week pilot program should provide documentation on whether or not extending gate hours is a viable and effective solution. (Above: The Port of Montreal.) Photo credit: Shutterstock.com.

A five-week pilot project to begin next month at the Port of Montreal will gauge the impact of extending gate hours at the port’s four main terminals in an effort to curb the persistent congestion that has triggered longer-than-normal turn times and spurred truckers to charge waiting fees.

Termont Montréal and the Montreal Gateway Terminals Partnership, who each operate two terminals at the port, at a meeting Monday agreed to open their terminals from 6 a.m. to 7 p.m. (local time) from May 14 to June 22, with a meeting of stakeholders scheduled for the mid-point, at which data collected will be analyzed. Until recently, most terminals at the port closed at 2:30 p.m.

After the meeting, at which details of the pilot were finalized, the terminals began extending their gates, even though the pilot does not begin for another two weeks. Present at the meeting were terminal operators, port officials, Mediterranean Shipping Co., a partner in one terminal, and a trucker representative.

On Friday, both Termont Terminals — Maisonneuve and Viau — were open from 6 a.m to 7 p.m., according to the operator’s website. Montreal Gateway Terminals Partnership’s Racine terminal, which is undergoing gate upgrades, was open from 7 a.m. to 10 p.m., and the Cast terminal closed at 3 p.m., the company website showed.

“What really differentiates us from other ports is that in spite of the competitive environment that exists between stakeholders, when push comes to shove, they are able to put their differences aside, and work towards a common goal,” said Tony Boemi, vice president of growth and development at the Montreal Port Authority. “The fact that stakeholders sat at the same table, and that competing terminals developed a common solution by offering similar extended hours is testament this. We are determined to find a solution.”

Truckers in March complained that congestion had been significantly worse since December, which port officials attributed variously to an increase in cargo volume, up 6.2 percent in 2017, a shift in cargo trends towards more imports, which go by truck rather than rail, bad weather, and off-schedule vessel arrivals causing bunching, as well as other factors.

Corey Darbyson, director of Transport Dsquare, a trucking company, expressed support for the project, adding that the extended gate hours appeared to have already cut waiting times. Friday was the first day he had not had to charge a customer a waiting fee, he said.

“I think it’s important to study peak times, so that we can be efficient and profitable,” said Darbyson. “The hours being extended shows that the port and their partners were at the minimum willing to listen. With good discussion came results.”

When the congestion was at its worst, truckers said three- or four-hour waits were not uncommon. Montreal Port Authoritysaid in March that 60 percent of the visits had taken fewer than 60 minutes from the port gate and 23 percent of the trips took between 60 and 90 minutes. Nineteen percent took more than 90 minutes. A sporadic review in March of a portal created by the authority that displays real-time waiting times showed that the longest wait times tended to be at two of the four terminals — Maisonneuve and Viau.

As a result of the congestion, some truckers began charging extra for long waits, including one trucker that added C$75 (US$58.43) an hour for waiting time at all the terminals, to be added after the first 90 minutes of waiting.

Boemi said Friday that complaints about congestion were “way down” on those in the past. In recent days, the portal has shown waiting times of between 20 and 40 minutes, sometimes rising to 80 or 100 minutes.

Late Friday afternoon, the wait time at Viau terminal stood at 173 minutes. However, the portal in recent weeks has shown that the sporadic, higher wait times have been more evenly spread among the terminals than in the past.

A meeting of the terminal operators, Quebec Trucking Association, Montreal Port Authority, and a non-profit transportation organization, CargoM, convened April 6, and the non-profit organization outlined a proposed pilot project on Monday. Some details were released in a letter signed by the two terminal operators, a representative of the trucking association, and MSC.

“At this meeting, the conclusions and recommendations of CargoM’s study on the costs of extending terminal opening hours were presented,” the letter said. “Frank and constructive discussions followed, making it possible to achieve consensus for the implementation of a pilot project.

As part of the pilot program, “data will be collected during the project to measure trucking gate use per time of day, and to see whether there is a significant redistribution of volume to improve fluidity,” the letter said.