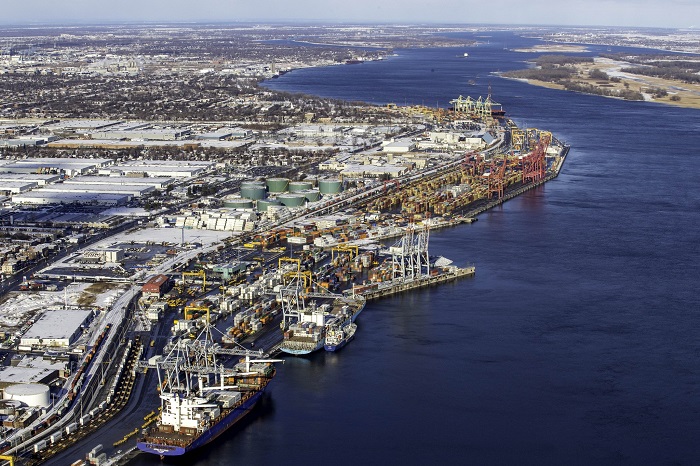 The Port of Montreal was No. 12 in North America in 2016. Photo credit: Montreal Port Authority.

The Port of Montreal is moving forward with its plan to build a $750 million container terminal at Contrecœur as record container volume growth last year hastens the estimated day when the port runs out of capacity.

The Montreal Port Authority on Feb. 1 released its main findings in an environmental study of the project, laying the groundwork for public consultation led by the Canadian Environmental Assessment Agency from Feb. 27 to March. The port authority aims to bring the first phase of the project, adding nearly 1.5 million TEU of annual capacity to the port, online by 2023/24. After the first phase, the port authority said the terminal has the potential to expand to handle an annual capacity of 3.5 million TEU.

Container volume through Canada’s second-largest port rose 6.2 percent, to nearly 1.54 million TEU, in 2017 compared with the prior year. That is the third-straight year volume growth surpassed the authority’s expectation of a 4 percent gain, Daniel Dagenais, vice president of operations and head of the project at the authority, told JOC.com. Roughly one-fifth of the port’s volume originates from or is destined to the United States.

The terminal’s 675-meter berth will be able to handle two post-Panamax vessels simultaneously. Because of the draft limitations of the Saint Lawrence Seaway, the largest ship to call the port has had a capacity of 5,000 TEU, with the average ship calling the port having a capacity of about 4,000 TEU.

Canadian National (CN) Railway’s line connect to the terminal, although Canadian Pacific Railway will also have access, Dagenais said. Under a co-production agreement with the two Class I railroads, CN would either have to shuttle CP’s trains or allow its locomotives onto its network. Discussions have centered on the former, Dagenais said. The planned terminal is roughly a mile and half from Highway 30, which intersects with the Southern Beltway that connects to the Ontario and US Midwest and Northeast markets.

To handle and maximize growing volume through Montreal, the province of Quebec is spending more than C$500 million ($402 million) to develop maritime and logistics business in the region over the next four years. Through the maritime strategy, the province looks to create two maritime transportation logistics hubs, with one in Contrecœur, across the St. Lawrence River and about 28 miles northeast of Montreal.