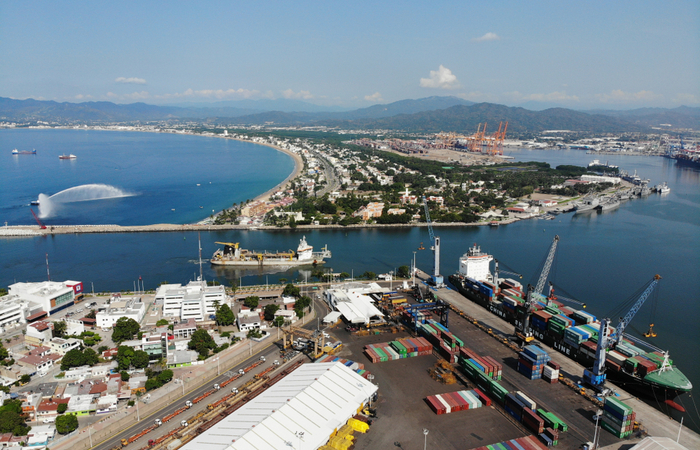 Cargo volumes through the Port of Manzanillo, Mexico, fell by 3.8 percent in 2019, including a 7.2 percent decline in exports, according to Mexican government figures. Photo credit: Shutterstock.com

Cargo volumes through Mexican ports fell in 2019 for the first time in six years as the country and some of its trading partners faced stagnating economies. Total volumes fell 1.5 percent from 2018, to 4.93 million loaded TEU.

Exports led the decline, falling 3.75 percent to 1.89 million loaded TEU. Imports slipped by just under 1 percent to 3.038 million loaded TEU, according to figures released this week by the Secretariat of Communications and Transportation (SCT), which oversees Mexico’s ports.

The decline was most pronounced on the Pacific Coast, where exports fell 5 percent; cargo through the Gulf Coast fell 1.9 percent. Imports declined on both coasts by less than 1 percent, the SCT figures show.

The decline in exports suggests that factors well beyond the country’s weak economy had a hand in reducing cargo volumes. One ocean carrier executive, who did not want to be identified, said the export decline is likely due to a drop in plastic waste exports to China, as well as declines in shipments to Latin American countries

“The global slowdown in auto sales and productions also has an impact, since Mexico is not just producing cars, but also a big producer and exporter of auto parts, which saw a decline in demand in 2019,” the executive said.

Data from the Global Trade Atlas (GTA) shows that after the United States and Canada, the countries that experienced the largest decline in the dollar value of Mexican exports they received in 2019 were Germany, China, and Brazil. Their exports declined 61 percent, 30 percent, and 46 percent, respectively, according to the figures from GTA, a product of IHS Markit, parent company of JOC.com.

Mexico experienced “economic stagnation” in 2019, with declines in the country’s gross domestic product (GDP) in the first and second quarters, according to IHS Markit. The analyst estimates Mexico’s GDP barely grew in 2019 — 0.05 percent — and predicts growth of just 0.84 percent in 2020 as a result of the slowdown in the United States economy, which receives 80 percent of Mexico’s exports.

Imports into Mexico were likely affected by the country’s slowing manufacturing sector, which in September had its worst performance in more than eight years. Auto sector sales and production also dropped in 2019, according to IHS Markit. The auto sector brings in imports of raw materials and parts for the country’s car plants.

Mexico’s economic weakness contributed to what shippers, freight forwarders, and ocean carrier executives last year described as a very low peak season, with West Coast ports experiencing little of the volume surge between July and October seen in past years.

The ocean carrier executive said his company is still trying to work out the reasons for the export decline and where “the leakage of volume was.” One likely reason was the loss of what had been a big business in shipping plastic scrap exports to China, which in 2018 stopped accepting most plastic waste.

The economic weakness in Latin American countries, which are Mexico’s main trading partners after the US, also likely pulled down exports, the executive said, citing Brazil and Argentina in particular. GDP in Latin America as a whole grew 0.8 percent in 2019, and Argentina was in recession during the year, with GDP contracting 2.8 percent, according to IHS Markit. And while Brazil’s economy improved over the year, with GDP growth of 1.1 percent, it was “relatively stagnant” at the start of the year, IHS Markit said.

The global slowdown in auto sales and production has also likely cut into exports, reducing foreign purchases of Mexican-made parts, the executive said.

Of Mexico’s four largest ports by volume of cargo handled, only the Port of Altamira saw an increase in cargo volume in 2019, rising 2.8 percent to 685,754 loaded TEU, the SCT figures show. Cargo volumes through the largest port on the Gulf Coast, Veracruz, fell 4.6 percent to 860,891 loaded TEU.