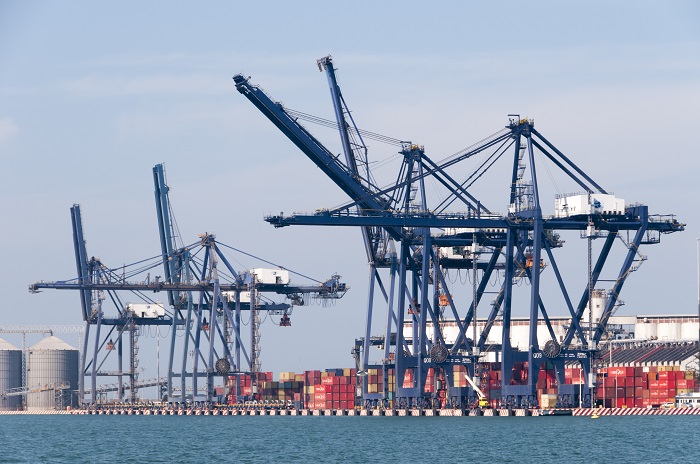 Container volume through Mexico ports last year decelerated from double-digit gains to 8.7 percent, with import growth through Pacific ports growing faster than at Gulf port counterparts for the first time in five years.

Volumes through Pacific Coast ports increased to 3.3 million loaded TEU, a 10 percent increase over the 2017 figure, as cargo through the Gulf Coast ports grew by 6.4 percent, to 1.69 million loaded TEU, according to figures from the Mexican Secretariat of Communication and Transportation (SCT), which oversees Mexican ports. The Pacific increase, up from 9 percent growth in 2017, was the first time since 2014 that West Coast annual volumes had increased faster than the Gulf Coast’s volume.

The increased volumes raises the potential risks of delays for shippers using Mexico’s West Coast ports as port resources, equipment, and manpower face additional stress. The Gulf port of Manzanillo, for instance, has struggled with truck congestion in recent months.

Mexico’s GDP grew by 2.1 percent in 2018, up from 2 percent in 2017, and is expected to grow by 2.2 percent in 2019, according to IHS Markit. Uncertainty also hangs over the economy from the high levels of violence and corruption risks, as well as policy uncertainty over whether President Andres Manuel Lopez Obrador, who took office in December, is business friendly.

The westward volume shift was driven in part by an 11.3 percent increase in imports on the Mexican west coast — far outpacing the 5.8 percent on the east coast. Also a factor was far slower growth in imports and exports at the port of Veracruz as it underwent an expansion. The first phase of the construction, a new container terminal, is scheduled to open in May.

Mexican cargo volumes nationally increased by 11.9 percent in 2017, with imports rising by 10.6 percent and exports growing by 13.6 percent, SCT figures show. Mexico’s cargo volume as a whole increased with a compound annual growth rate of 5.9 percent from 2013 to 2018, with the Pacific Coast growing by 5.3 percent and the Gulf Coast increasing by 7 percent, the SCT figures show.

The eastward drift of cargo volumes in the last few years echoed a similar move in the United States, where the market share held by West Coast ports has declined from 51.1 percent in 2005 to 44.1 percent in 2018, with much of that share picked up by the East Coast ports. The shift was driven in part by the opening of the expanded Panama Canal, which enabled ships up to 14,000 TEU to pass through the canal, compared with 5,000 TEU before the expansion.

Economists last year said the opening of the Panama Canal played a part in the eastward drift of market share in Mexico, as did the fact that many new car plants in Mexico are closer to Gulf Coast ports. That helped to boost import volumes with car part shipments and materials needed for manufacturing.

The import increase in Pacific Coast volumes in 2018 stemmed from near double digit or greater growth, SCT figures show. Imports through the port of Manzanillo increased by 9.9 percent, while imports through Lazaro Cardenas rose by 11 percent and through the far smaller port of Ensenada, by 28.8 percent.

On the Gulf Coast, cargo through the port of Veracruz grew by 5.3 percent in 2018, to 902,520 TEU, compared with an 18 percent increase in 2017. That increase helped boost the port’s cargo enough to become the second-ranked port in the nation, pulling ahead of Lazaro Cardenas in 2017 for the first time. Veracruz, which is operating at close to its capacity, has struggled with a lack of berths, which has caused delays in vessels coming into port, and insufficient space and depth to handle large ships.

The Gulf Coast port of Altamira, which enjoyed a 15 percent increase in cargo volume in 2017, increased cargo volume by just 2.8 percent in 2018, the SCT figures show.