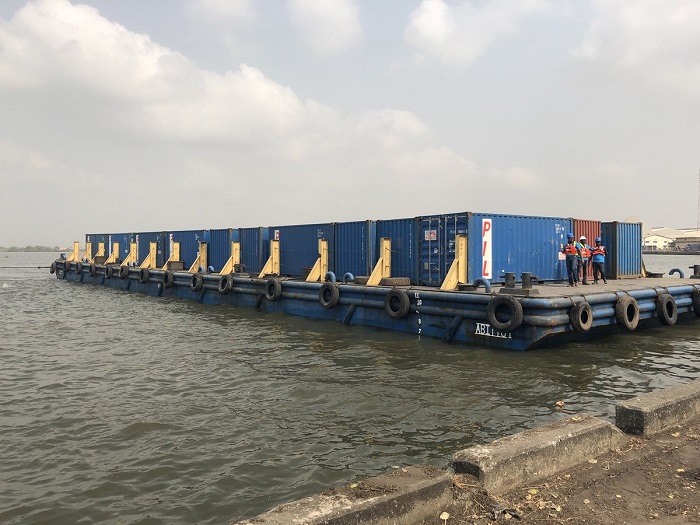 The port will need to come to terms with its congestion as Nigeria's GDP growth is forecast to accelerate from 0.8 percent last year to 3 percent in 2021, according to IHS Markit. Photo credit: Nigerian Ports Authority.

APM Terminals Apapa has received its first shipment of containers via barge in an effort to help reduce regular road congestion that has become all the more urgent during construction work on the Lagos port approach road.

The Nigerian Ports Authority (NPA) hopes the successful shipment of 32 containers of manganese ore for export from the Ikorodu section of the city will encourage shippers to take multimodal options seriously while the capacity of the Wharf Road is limited by repair work. The port is also working to establish intermodal rail connections with 15 to 20 locomotives — each capable of hauling 20 FEU at a time.

“The alarming state of most roads leading to port locations, especially in the Apapa area of Lagos would have been avoided if we had devised ways to move goods and produce from and into the hinterland without the pressure that articulated vehicles bring on the roads,” said NPA managing director Hadiza Bala Usman at a ceremony commemorating the shipment.

The barge service is the latest in an aggressive effort by the port authority to find solutions to chronic and debilitating congestion in the Apapa area of Lagos that has led to plans for mega-ports outside the city.

The NPA in September said it had secured off-road parking sites able to accommodate 6,000 trucks so they would no longer have to wait on port roadways and access roads. The port said it has dedicated 1.8 billion Nigerian naira ($5 million) to the Wharf Road rehabilitation although the road is not under its control or responsibility.

NPA and the local government have also put in place restrictions on truck traffic in the area, mandating that trucks wait at their off-port yards until vessel arrival and that trucks remain in a single line in a single lane.

To further ease congestion during the Wharf Road repairs, the port has repaired a number of smaller roads, such as the Creek Road, to enable access to the port area from other directions.

The port will need to come to terms with its congestion as Nigeria's GDP growth is forecast to accelerate from 0.8 percent last year to 3 percent in 2021, according to IHS Markit. The Stanbic IBTC Bank Nigeria PMI prepared by IHS Markit said that headline PMI rose to 57.3 in January from 56.8 in December, which is the fastest rate of increase since December 2014, on the back of higher export orders and industrial output.