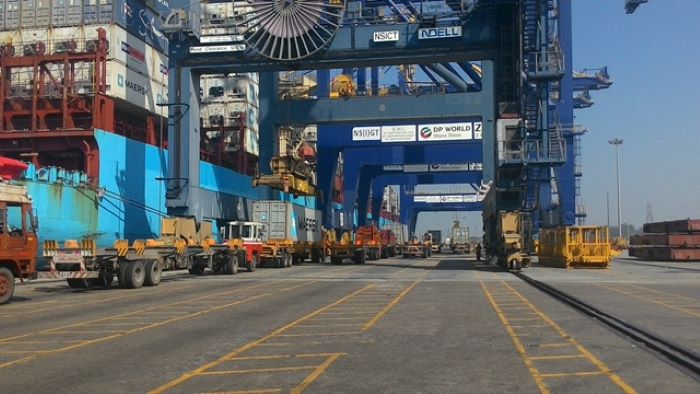 An inter-terminal rail handling dispute that has dogged Jawaharlal Nehru Port Trust (JNPT) since the opening of a PSA International facility a year ago is boiling down to questions of tariff regulation and cost transparency at India's busiest container harbor.

In its latest intervention with authorities on the intra-port issue, the Maritime Association of Nationwide Shipping Agencies — India (MANSA), said extra charges levied by terminals operated by APM Terminals and DP World are excessively high and not commensurate with the services rendered for inter-terminal rail transfers related to BMCT. MANSA represents the local ship agents’ community.

MANSA said users face an “additional service request” fee of Rs. 1,805 (about $26) per TEU for every BMCT-linked container when railed through other terminals, even though the activity involved — purportedly lift-on to a BMCT truck — justifies only Rs. 844 per TEU.

“An analysis of a few activities clearly indicates that the charges are not justifiable. The charges have to be fixed transparently after proper identification of each activity and related costs,” the group said in a letter to JNPT and other related government agencies. “The charges being levied by the adjoining private terminals are disproportionate to the actually rendered services, amounting to undeserving enrichment.”

MANSA said explanations provided by APM Terminals Mumbai for the levy of such charges, in a recent advisory, are not tenable and do not fully conform to the facts. “The elaborate explanation and logical conclusions drawn by APM Terminal[s] cannot be accepted in totality by the members of MANSA,” it said.

Being a new entrant, PSA is not part of the inter-terminal rail handling cooperation agreement currently in place at the port, which has seemingly compounded user concerns. According to MANSA, users also incur a common “inter-terminal rail” fee of Rs. 400 per TEU on imports redirected from other terminals to BMCT’s rail despite not being covered by the joint mechanism.

MANSA agreed that other terminal stakeholders are entirely justified in compensating themselves for lift-on, lift-off (lo-lo) services provided, but said such charges should stay at Rs. 844 per activity, as approved by the Tariff Authority for Major Ports (TAMP), the country's port regulator.

MANSA has requested a joint session with all stakeholders to discuss user concerns, while demanding a refund of alleged overpayments. “The matter can only be sorted out by laying down clear guidelines to levy charges proportionate to the services provided,” the group said.

Under the inter-terminal program, rail operators can transport inland container depot (ICD) goods booked by multiple terminals and discharge or load all containers at one terminal. With current infrastructure limitations at the port, a vast majority of trains serving JNPT terminals run on a mixed basis. Hence, the dispute has been a setback for newcomer BMCT.

At a recent interactive session hosted by premier industry body, the Associated Chambers of Commerce & Industry of India (ASSOCHAM), in New Delhi, trade representatives sought government intervention to settle JNPT intra-rail problems through a coordinated stakeholder effort to engage port, customs, and terminal authorities. Besides fixing the pricing problem, a customs jurisdictional issue must be sorted out as the BMCT site is at a distance from other terminals and, as such, does not enjoy contiguous yard access, according to industry sources.

JNPT has begun fiscal year 2019-20 on an upbeat note, after ending the previous year with an all-time throughput record of 5.13 million TEU. During April-May, the first two months of the current year, the port logged an impressive 7 percent increase in volume compared with the year-ago period, according to a JOC.com port data analysis. Despite the heightened competition, APM Terminals Mumbai continues to command 40 percent of cargo passing through JNPT, with a clear edge over peers in productivity rates and pro-trade reforms initiated by the government.